New York — The Committee to Protect Journalists (CPJ) presented its International Press Freedom Awards for the year 2000 to four journalists–from Bosnia-Herzegovina, the Democratic Republic of Congo, Malaysia, and Iran–for their courage and independence in reporting the news. These honorees endured jail, had their lives threatened and, in one case, survived a car-bomb attack, because of their work as journalists.

The tenth annual Press Freedom Awards were presented at a formal dinner ceremony at the Waldorf-Astoria in New York City on Tuesday, November 21st.

The winners of the Tenth Annual International Press Freedom Awards are:

Zeljko Kopanja, co-founder and editor of Nezavisne Novine, the largest independent Serb daily in Bosnia-Herzegovina. Kopanja lost both his legs as a result of a car-bomb assassination attempt outside his home in Banja Luka in October, 1999. The attack was prompted by articles in Nezavisne Novine that documented the killings of Bosnian Muslims by Bosnian Serb authorities during the 1992-95 war. Read an interview with Zeljko Kopanja.

Modeste Mutinga, publisher of Le Potentiel, the only independent daily newspaper in the war-torn Democratic Republic of Congo. Mutinga has been repeatedly jailed for daring to publish, and refusing to reveal sources for, reports critical of President Laurent Kabila and his regime. Read an interview with Modeste Mutinga.

Steven Gan, editor of the provocative online publication Malaysiakini. Gan routinely tests the limits of his government’s tolerance for press freedom by publishing articles on the Internet that could never appear in Malaysia’s tightly controlled mainstream press. Read an interview with Steven Gan.  Steven Gan is also featured in a special PBS Online NewsHour web interview.

Mashallah Shamsolvaezin, reformist editor of several now-banned Iranian dailies. Shamsolvaezin was jailed in April after being sentenced to 30 months imprisonment for allegedly insulting Islamic principles in an article that criticized capital punishment in Iran.[Read the article] He is currently serving his term in Tehran’s notorious Evin Prison.

CPJ also honored Otis Chandler, former publisher of The Los Angeles Times and former chairman of the board and editor in chief of the Times Mirror Company, with the Burton Benjamin Memorial Award for a lifetime of distinguished achievement in the cause of press freedom.

In announcing the awards, CPJ Board Chairman Gene Roberts said, “We honor these journalists for their great courage in the face of enormous risks. They bravely stand up to tyrants who won’t allow free discussion, who want to hide corruption, who want to keep the world from witnessing their deeds. They inspire us all.”

Ann Cooper, CPJ executive director, said of the journalists, “They have endured terrible difficulties simply for working to uncover and report the truth, or because they have expressed opinions that the leaders of their countries deem to be dangerous. The awardees remind us that a free press cannot be taken for granted.” 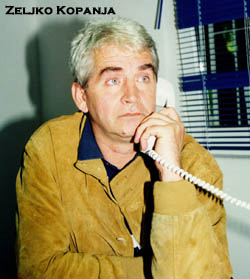 Zeljko Kopanja, co-founder and editor of Nezavisne Novine, the largest independent Serb daily in Bosnia-Herzegovina, almost lost his life because of his work. On October 22, 1999, the day after his 45th birthday, Kopanja, a former professional soccer player, got into his car outside his Banja Luka home, turned on the ignition, and became the victim of a car-bomb explosion. Although he survived the assassination attempt, he lost both his legs. But after learning how to walk on prosthetic legs, he returned to work at his newspaper.

Kopanja believes his attackers tried to kill him for publishing a series of articles that documented the killings of Bosnian Muslims by Bosnian Serb authorities during the 1992-95 war. Never before had a Bosnian Serb newspaper acknowledged the role of Bosnian Serb authorities in atrocities perpetrated against Muslims. After the attack, Kopanja’s sources were afraid to speak out, and the subject of war crimes was once again taboo in the media. But Kopanja was not intimidated.

A Bosnian Serb, Kopanja co-founded Nezavisne Novine soon after the 1995 Dayton agreement. He remains the paper’s editor and its inspiration. 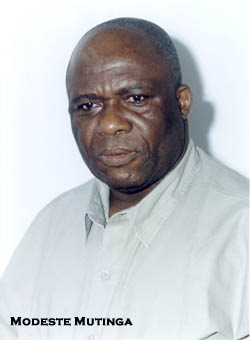 Modeste Mutinga is publisher of Le Potentiel, the only independent daily newspaper in the Democratic Republic of Congo (DRC). As a result, he is painfully familiar with arrest, interrogation, intimidation and violence, all tools used to silence media in the DRC, where a brutal war has been raging for more than two years. After the overthrow of Mobutu Sese Seko by Laurent-Désiré Kabila in May, 1997, the difficult life of independent Congolese journalists became even more dangerous. Le Potentiel frequently criticized the new regime. Mutinga, in turn, became a frequent target of government reprisals.

He has been arrested, detained without charge, and interrogated numerous times, and his passport has been confiscated on several occasions. In January 2000, President Kabila’s advisors physically assaulted Mutinga in New York City where he was covering Kabila’s meeting with the United Nations Security Council.

Despite this harassment, Modeste Mutinga remains a relentless advocate for human rights in one of Africa’s most repressive countries. The founder of several local press freedom groups, he is also president of a Congolese coalition working to restore peace to the war-plagued country. His determination is an inspiration to journalists throughout Africa who continue to fight against tremendous odds for freedom of expression and better governance. 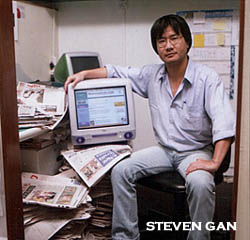 Steven Gan, co-founder and editor of Malaysiakini, is a pioneer in the use of the Internet to evade government restrictions on the press. With the major media in Malaysia owned or controlled by the ruling coalition, and a strict licensing system in place to shut down any publications that do not follow the official line, self-censorship is the norm. Gan uses the relatively unfettered space of the Internet to publish a newspaper that challenges the existing order.

Before launching the provocative online publication in November, 1999, Gan worked as a print journalist. He frequently did battle with both government regulations and the timidity of editors at The Sun, a Malaysian daily newspaper. In 1995, he led a team of investigative reporters who exposed the deaths of 59 inmates in a migrant worker detention camp. When his editors refused to run the reports, Gan gave the information to a human rights activist, who released it and is now facing a possible jail term for “publishing false news.”

Gan was one of five journalists arrested in 1996 for covering the Second Asia Pacific Conference on East Timor. He spent five days in jail and was declared a Prisoner of Conscience by Amnesty International. When his editors spiked a column he wrote detailing his arrest and those of conference organizers and participants, he resigned in protest. 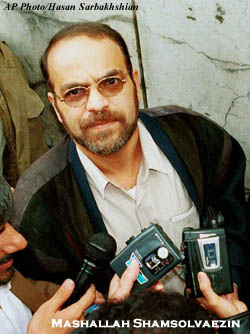 Mashallah Shamsolvaezin, a reformist editor in a country where the reformist press is under siege, is in jail in Tehran’s notorious Evin Prison. One of Iran’s most respected and popular journalists, Shamsolvaezin strove to remain above the political fray, consistently working to preserve his paper’s reputation for objectivity and professionalism.

But his bold coverage of social and political affairs made him a frequent target of the conservative judiciary that since last year has been carrying out a relentless assault against reformist papers and journalists Last April, Shamsolvaezin was sentenced to 30 months imprisonment for allegedly insulting Islamic principles. His “crime” was having published a 1999 article criticizing capital punishment in Iran.

For the last three years, Shamsolvaezin has been a leading force in the burgeoning Iranian reformist press, and is widely regarded as its dean. As editor of the ground-breaking dailies Jameah, Tous, Neshat, andAsr-e-Azadegan, he saw each one successively banned by Tehran’s Press Court between 1998 and 2000. His papers were unique in Iran, publishing a broad range of political opinions, including not only those of exiled dissidents and reformists but of conservatives as well. 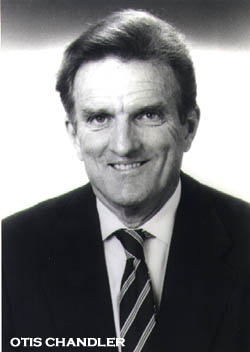 Otis Chandler‘s distinguished career as publisher of the Los Angeles Times and chairman and editor in chief of the Times Mirror Company created a strong legacy for quality journalism in this country.

He believed that a great city deserved a great newspaper. For the next 20 years, Chandler led the charge to accomplish that mission. The Times expanded its coverage at home, in Washington, and around the world. It now has an editorial staff of about 1000, including more than two-dozen overseas bureaus. The paper is renowned for its in-depth reporting, literary journalism, and investigative articles, and is now widely recognized as one of the world’s great newspapers. The paper has won 20 Pulitzer Prizes since 1960.

Newsday, the Baltimore Sun, and other Times Mirror dailies also flourished under Chandler’s leadership. In 1980, he took on the senior corporate role as chairman and editor in chief of the company, and over the years since then has held fast to the belief that, in an age of new and changing media, “newspapers have a very relevant role.” He has continued to speak out in support of an unfettered press at a time when newspapers around the country are increasingly facing corporate business pressures. Last fall, he even criticized the Times, over a questionable deal with an advertiser that compromised the editorial content in an issue of the Times Sunday magazine.

The Burton Benjamin Memorial Award, given for a lifetime of distinguished achievement in the cause of press freedom, honors the late CBS News senior producer and former CPJ chairman who died in 1988.

More On:
Bosnia and Herzegovina
Democratic Republic of the Congo
Iran
Malaysia
USA