Thirteen journalists have been killed in contract style murders since Russian President Vladimir Putin took office, according to reporting by the Committee to Protect Journalists. No one has been brought to justice in any of the slayings. 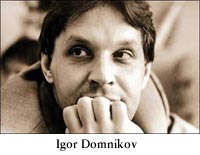 Domnikov, 42, reporter and editor for the twice-weekly Moscow paper, died two months after being struck in the head with a heavy object in the entryway of his apartment building on May 12. The assailant may have mistaken him for Novaya Gazeta investigative reporter Oleg Sultanov, who lived in the same building and received threats after reporting on oil industry corruption.