By Elisabeth Witchel, CPJ Impunity Campaign Consultant
Impunity is entrenched in 14 nations, according to CPJ’s 2018 Global Impunity Index, which ranks states with the worst records of prosecuting the killers of journalists.

Somalia tops the list for the fourth year in a row and two countries rejoin the list of offenders, including Afghanistan where a suicide attacker targeted a group of journalists in Kabul, killing nine. Colombia also reappeared on the ranks after a breakaway faction of a guerrilla group with alleged ties to drug trafficking kidnapped an Ecuadoran news crew near the border and murdered them in Colombian territory. Both nations had fallen off the index in recent years as violent conflict receded.

In the past decade, at least 324 journalists have been silenced through murder worldwide and in 85 percent of these cases no perpetrators have been convicted. It is an emboldening message to those who seek to censor and control the media through violence. More than three quarters (82 percent) of these cases took place in the 14 countries that CPJ included on the index this year. All 14 countries have featured on the index multiple times since CPJ began to compile it in 2008, and half have appeared every year. 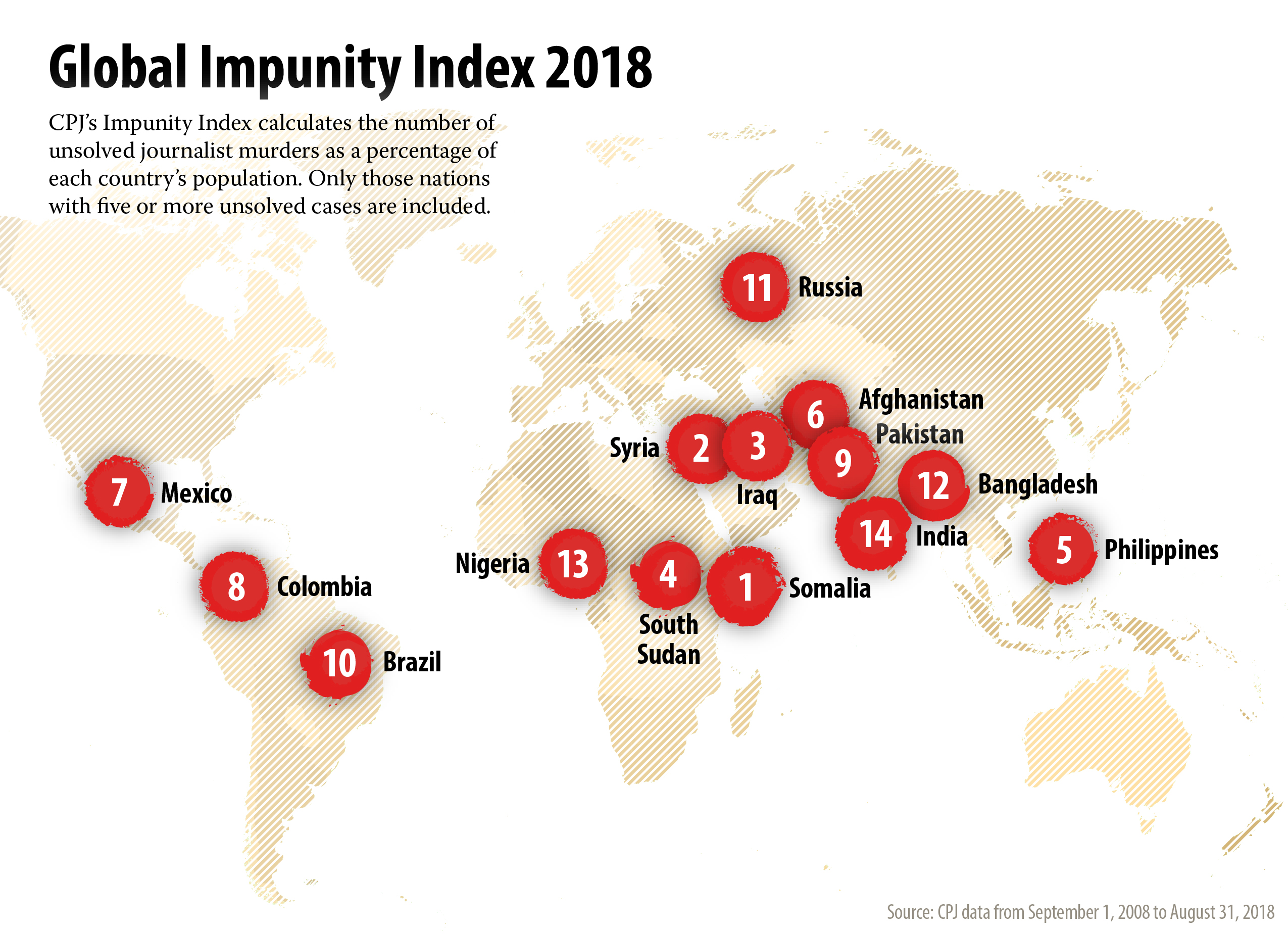 The majority of victims are local journalists. The list includes states where instability caused by conflict and violence by armed groups has fueled impunity, as well as countries where journalists covering corruption, crime, politics, business, and human rights have been targeted and the suspects have the means and influence to circumvent justice through political influence, wealth or intimidation.

The Impunity Index is published annually to mark the International Day to End Impunity for Crimes against Journalists on November 2. It calculates the number of unsolved murders over a 10-year period as a percentage of each country’s population. For this edition, CPJ analyzed journalist murders in every nation that took place between September 1, 2008 and August 31, 2018. Countries with five or more unsolved cases for the period are included. As a measure of political will to address impunity, CPJ noted which states participated in the UNESCO’s impunity accountability mechanism. Each year, this mechanism requests information on the status of investigations into killed journalists.

The following interactive chart is a list of the countries with the worst records in prosecuting those who murder journalists in direct retaliation for their work. The countries are ranked by their impunity rating, from highest to lowest.

CPJ’s Impunity Index calculates the number of unsolved journalist murders as a percentage of each country’s population. For this index, CPJ examined journalist murders that occurred between September 1, 2008, and August 31, 2018, and remain unsolved. Only those nations with five or more unsolved cases are included on the index. CPJ defines murder as a deliberate attack against a specific journalist in relation to the victim’s work. This index does not include cases of journalists killed in combat or while on dangerous assignments, such as coverage of protests. Cases are considered unsolved when no convictions have been obtained, even if suspects have been identified and are in custody. Cases in which some but not all suspects have been convicted are classified as partial impunity. Cases in which the suspected perpetrators were killed during apprehension are also categorized as partial impunity. The index only tallies murders that have been carried out with complete impunity. It does not include those where partial justice has been achieved. Population data from the World Bank’s 2017 World Development Indicators were used in calculating each country’s rating.

EDITOR’S NOTE: The second paragraph of this report has been updated to clarify details about the group that kidnapped the Ecuadoran news crew.