Who would have thought that France would top the list of most deadly countries for the press in 2015, second only to Syria? The massacre of eight cartoonists and journalists by Islamic militants at the Paris office of the satirical magazine Charlie Hebdo last January was one of the deadliest attacks against the press since CPJ began keeping records in 1992. And in November a freelance music journalist was among the 130 killed in an Islamic State-inspired attack in the French capital.

To mark the one-year anniversary of the Charlie Hebdo murders tomorrow, the magazine published a million copies featuring a blood-spattered god figure on the cover and contributions from journalists and public officials, including the French culture minister.

“In one sense the freedom of speech has never been so popular or supported, but on the other hand, you need to be far more brave to be a journalist today,” Caroline Fourest, a French journalist and contributor to Charlie Hebdo for the past five years, told me. She noted that the remaining staff live under constant police protection and work from a secret location. “They are not free for sure, they will never have their lives back. They will try to survive through this week and live with the fact that they are not free anymore because they wanted to defend freedom of the press for all.”

Throughout 2015 journalists were targeted by Islamic militant groups such as Islamic State and Al-Qaeda, which were responsible for the murder of at least 30 journalists in eight countries. This CPJ StoryMap highlights some of their cases.

As countries around the world sought to respond to real and perceived threats from extremist groups, the latest iteration of the War on Terror has put press freedom in its crosshairs. Governments use terrorism-related charges to jail journalists, while policy debates about countering violent extremism online threaten free expression and undermine the fabric of a free and independent Internet.

Egypt and Turkey, two stalwart allies of the U.S. and Europe, rank high on the list of countries that jail journalists, nearly all of them imprisoned over allegations of terrorism. Of the 199 journalists imprisoned in CPJ’s 2015 census, at least 110 were jailed on anti-state charges, often related to terrorism. 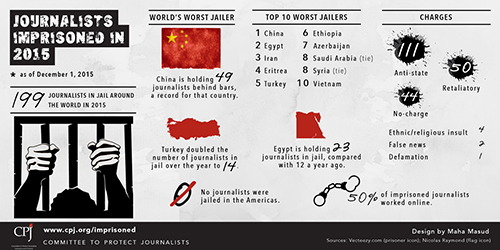 Six Egyptian journalists who worked for news outlets affiliated with the Muslim Brotherhood, which authorities designated as a terrorist group, were sentenced to life in prison on charges related to terrorism. Five journalists reporting on the PKK or in PKK-controlled areas, as well as those affiliated with pro-Kurdish outlets, were imprisoned in Turkey on terrorism charges. And Bahrain and Saudi Arabia both have charged critical journalists with terrorism, with the former stripping four of their citizenship.

The use of broad anti-terror laws to crack down on legitimate reporting and journalistic commentary has been well documented by CPJ, including in countries usually viewed as more democratic. A freelance journalist who covered alleged human rights abuses by local authorities and the activities of Maoist rebels was charged with terrorism in India in September 2015. Maoists are designated as terrorists in India. In the UK, police used anti-terrorism legislation to demand communication between a BBC journalist and a man in Syria who said he was an Islamic State member; to obtain information on journalists’ confidential sources; and to require Internet Service Providers to do more to track and take down extremist content.

The “countering violent extremism” agenda provides cover for such jailings as well as for policy-level restrictions on free expression. 2015 was a turning point as tech companies including Facebook and Google were reported to have moved more aggressively to remove extremist or radical content and governments sought new powers to monitor and enforce anti-radicalization strategies.

Calls by governments for increased surveillance powers and for social media companies to remove extremist propaganda and close accounts that promote radicalization have been made after each attack, raising concerns among rights groups, including CPJ, about the potential impact on free expression. Last month, after the Islamic State-inspired attacks in California, two U.S. senators introduced legislation to require tech companies to report terrorist activity, as they are already required to do with child pornography. In October, CPJ joined 30 other groups in opposing a draft surveillance law in France that would give sweeping powers to intelligence agencies to spy on citizens.

The creation of Europol’s Internet Referral Unit has resulted in more than 500 referrals to social media companies since July, with more than 90 percent of the content being deleted, a spokesperson for the unit told me. Similarly, 93 percent of the sites flagged by UK’s Scotland Yard were removed by Google, according to EU counter-terrorism coordinator Gilles de Kerchove.

And this is OK with some, like Fourest, who told me she thinks social media companies need to react more quickly to remove Islamic State propaganda. “The problem today is you cannot write or think or be [a] journalist if you are dead,” she said. “This is not a problem of censorship, at least in democratic states. The censorship is coming from the fanatics on the ground.”

But, as I’ve written before, blanket restrictions on types of content are problematic enough in democratic countries where rule of law and due process are the norm, and are poisonous and subject to abuse in countries that lack these protections for human and civil rights.

China, for example, has defended its regulation of online content, pursuit of a real-name registration policy for Internet services, and banning of social media accounts. An op-ed in the state-run Xinhua news agency in February claimed the accounts “were related to terrorism, violence and pornography” and cited U.S. policy. In December, Russia’s only independent TV news station, Dozhd TV, was subjected to an audit to check for anti-terrorism violations, among other purported legal abuses, in what CPJ and others believe was a politically motivated move.

As we reflect on the anniversary of one of the bloodiest attacks on journalists in history and remember those who suffered to bring us the news, we must remain vigilant against policies that threaten press freedom and provide fodder to repressive governments to restrict independent and critical journalism.

Courtney C. Radsch, PhD, is the advocacy director at the Committee to Protect Journalists and the author of Cyberactivism and Citizen Journalism in Egypt: Digital Dissidence and Political Change. As a veteran journalist, researcher, and free expression advocate she writes and speaks frequently about the intersection of media, technology, and human rights. Follow her on Twitter @courtneyr.