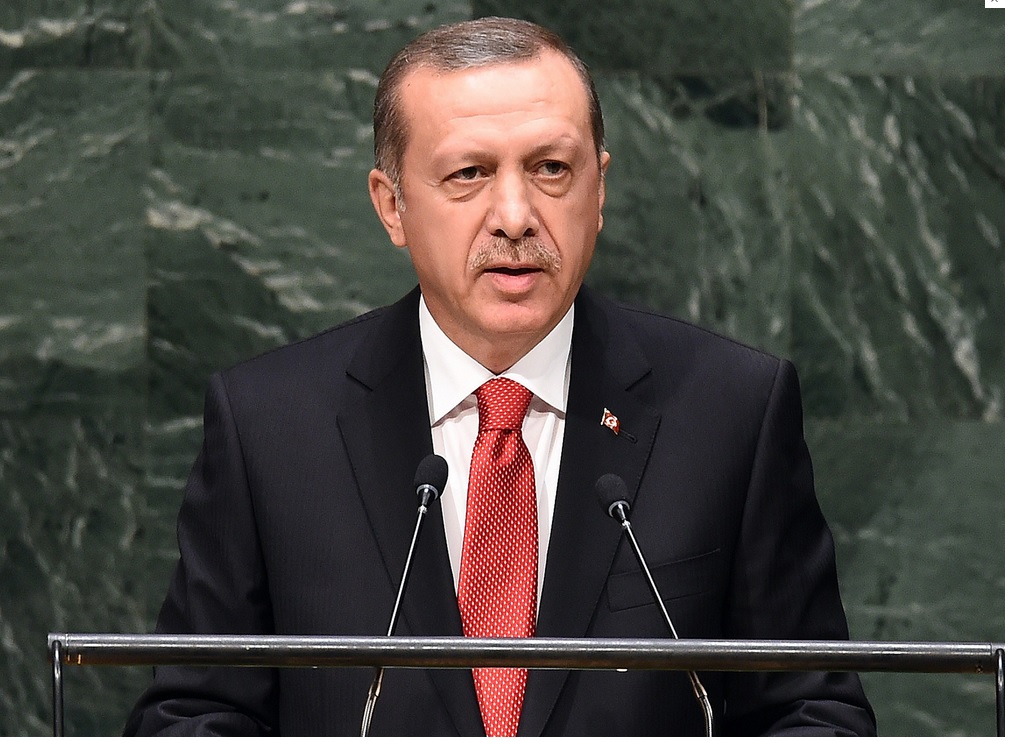 In an unprecedented meeting with Turkish President Recep Tayyip Erdoğan and other officials in early October, a joint delegation from the Committee to Protect Journalists and the International Press Institute raised concerns about the climate for press freedom in Turkey, including the imprisonment of journalists and online restrictions. In the meetings, officials defended their country’s press freedom record but agreed to take steps to improve conditions for journalists.

While the delegation welcomed the government’s pledge to address our concerns, we await evidence of action. CPJ has a history of advocating for a more open climate for press freedom in Turkey. In 2012, we released a report, “Turkey’s Press Freedom Crisis,” when 61 journalists were behind bars in the country. Today, Turkey is holding at least seven journalists, according to CPJ research.

The global interest in the ongoing press freedom struggle in Turkey, the country that earned the ignoble distinction of being the world’s leading jailer of journalists last year, was evidenced by the mission’s extensive coverage in the press, including in ABC News, Global Post, Le Figaro, Hürriyet, and Zaman, as well as by CPJ board member Jacob Weisberg in Slate.

After a promising start, self-censorship and fear

Self-censorship and fear are not what we would expect to hear about regarding the situation for journalists in an EU member country. But following a CPJ mission to Hungary, in which CPJ spoke to journalists, media lawyers, rights defenders, and government officials about the country’s press freedom record, that was the bleak picture that emerged.

“After a promising early democratization process, Hungary is now heading in a repressive direction, particularly when it comes to the media,” said CPJ board member Kati Marton, who led the mission.

The gap between official perspectives and those of journalists underscores the need to focus on holding Hungary accountable for its dismal press freedom policies. Zoltan Kovacs, spokesman for Prime Minister Viktor Orbán, dismissed as unfounded any assertion that the country had slid backward on media freedom. But dozens of journalists cited to us restrictive measures on the press, including the 2010 media law, which puts regulatory powers in the hands of government loyalists, and a 2013 legal amendment that gives authorities power to refuse access to information.

Sign up for CPJ’s Europe and Central Asia alerts to receive the latest news on Hungary.

The lack of justice in hundreds of murders of journalists around the world is one of the greatest threats to press freedom today, CPJ found in a report on impunity released in late October to mark the first U.N.-recognized International Day to End Impunity for Crimes Against Journalists on November 2. The report, “The Road to Justice: Breaking the Cycle of Impunity in the Killing of Journalists,” explores the reasons behind impunity–conflict, corruption, weak institutions–but makes the case that a lack of political will is the most prevalent impediment to justice.

CPJ has long advocated for international recognition of impunity in the killing of journalists. In November 2013, the U.N. adopted a resolution calling on states to end the cycle of injustice, recognizing November 2 as the International Day to End Impunity and calling on the U.N. secretary-general to report on the progress made in regard to the 2012 UN Plan of Action on the Safety of Journalists and the Issue of Impunity.

The report found that worldwide, there has been a near-total failure to prosecute those who order crimes against journalists. Between 2004 and 2013, 370 journalists were murdered in direct retaliation for their work. In 90 percent of the cases, there has been total impunity–no prosecutions and no convictions.

CPJ will launch the report at the U.N. in New York on November 3 and in Strasbourg, France, at the third U.N. Inter-Agency Meeting on the Safety of Journalists on November 4. Follow #EndImpunity and #IDEA on Twitter, and click here to see how you can get involved.

More than six years after being jailed for his critical views, Nguyen Van Hai, also known as Dieu Cay, was released from prison in October. CPJ honored Hai in November 2013 with its International Press Freedom Award and hosted pleas for his release on our website as part of a broader advocacy effort to secure his freedom. On October 21, all of the efforts paid off: Dieu Cay arrived in the U.S. a free man.

“It’s always good when a case like this turns out well, but we’re already thinking of our next step in Vietnam,” said Dietz. “There is a personal sense of accomplishment for the group of us who worked on this. But there are still a lot of journalists in jail–most of them bloggers like Nguyen Van Hai. Soon after we got word of his impending release, our thinking became ‘Just because one has been freed doesn’t mean we can forget about the rest of them.'”

More than a dozen other journalists remain in jail in the country, according to CPJ research. Learn more about the climate for press freedom in Vietnam in Shawn Crispin’s four-part blog series, “Undercover in Vietnam.”

In an unprecedented exodus from one of the world’s worst jailers of journalists, more than 20 Ethiopian journalists fled to Nairobi to seek exile in recent months. Nicole Schilit, CPJ’s Journalist Assistance associate, traveled to Nairobi in October with a colleague from Reporters without Borders and met with Ethiopian journalists, editors, and newspaper owners seeking asylum in Kenya, as well as with the Kenyan government and U.N. agencies that provide assistance.

“In my time at CPJ, I have not seen such a large number of journalists flee one country in such a short time span,” said Schilit. The exodus follows journalists in Ethiopia being charged with terrorism, publications being shuttered by the government, and the firing of at least 20 journalists from a pro-government station because of alleged criticism.

“It was very clear that these journalists were still a little shell-shocked from being forced to leave their country. Several told me they were depressed and felt like they woke up every day, realizing they had nothing,” said Schilit. “Many of the journalists had left Ethiopia with very few items and now depend on outside assistance for the most basic living essentials.”

Some of the journalists CPJ spoke to expressed concern about their security in Kenya, saying they had been harassed by Kenyan authorities. CPJ, RSF, and the Rory Peck Trust sent the Kenyan government an open letter about this earlier this year.

This year, CPJ has financially supported at least 16 Ethiopian journalists in exile in Nairobi through its Gene Roberts Emergency Fund. The United Nations High Commissioner for Refugees in Nairobi has agreed to look into the cases of at least 22 Ethiopians.

You can help support our work and journalists in exile around the world by making a gift today.

Journalist freed from prison in Iran, dozens others remain

Iranian journalist Yeganeh Salehi was freed from jail in October but her husband, Washington Post reporter Jason Rezaian, who was arrested with her in July, remains behind bars. CPJ has been working with the Post and human rights and civil society groups to advocate for the release of Rezaian and other journalists imprisoned in Iran.

In September, we wrote a letter to Iranian President Hassan Rouhani, calling on him to invite Ahmed Shaheed, the special rapporteur for human rights in Iran, to visit the country and for Iran to honor its commitment to cooperate with the U.N. Universal Periodic Review. We have not received a reply.

According to CPJ research, Iran and China are currently the world’s leading jailers of journalists, with around 35 journalists in jail each. We can only hope Rouhani finds the political will to reverse this dubious honor. Join us in calling for the release of all imprisoned Iranian journalists.

Nearly 8,000 journalists and concerned citizens worldwide have joined CPJ in calling on the White House to protect the #RightToReport in the Digital Age. CPJ has invited people to support the campaign on CPJ’s website, or on Participant Media and Change.org, and we hope that anyone concerned about the impact of surveillance and harassment of journalists will consider signing and sharing the petition.

Documentary filmmaker Laura Poitras, whose film about whistleblower Edward Snowden just hit theaters, has signed the petition. Amid the media throng covering the premiere of Citizenfour, Poitras sat down with CPJ’s Sara Rafsky to talk about how she knew she “was going to be able to film something of historical magnitude” when she set out to make the story about the whistleblower who revealed the extent of NSA spying.

A year ago, CPJ published its first special report on press freedom in the U.S. out of concern that the surveillance and harassment of journalists and their sources were having a detrimental impact on the press. We hoped that our measured and targeted recommendations would prompt the Obama Administration to take steps to mitigate the deteriorating press freedom environment. But little changed. The administration’s disheartening lack of response to our report and recommendations led CPJ to launch the campaign, which calls on the government to reform practices that undermine journalists’ ability to do their work in the digital age.

We hope that you, too, will add your voice.

CPJ is also helping journalists protect themselves and their sources by raising awareness about how to conduct journalism more securely in the digital age, from explaining how to protect against eavesdroppers to how resistance to encryption jeopardizes journalism. If you want to learn more, follow @CPJInternet on Twitter and check out our Journalist Security Guide.

With your help, CPJ can continue the fight for press freedom. Your support makes all the difference to us–and to journalists around the world who rely on CPJ to speak out without fear. Please join us by making a gift today.

CPJ Advocacy Director Courtney Radsch will join Ray Suarez of Al-Jazeera’s “Inside Story,” Brendan O’Neil of Spiked, and Nick Gillespie of Reason for a discussion called “Taming the Messenger: The New Threat to Press Freedom,” in which she will discuss CPJ’s Right to Report in the Digital Age Campaign. This one-day event is a chance for speakers from the U.S. and Europe to explore the state of press freedom today. Get your free tickets here.

If you’re in Washington, D.C., join CPJ and the Project on Middle East Democracy for a screening of the film “Under Threat,” an on-the-ground exploration of the dangers journalists face in Egypt and the press freedom challenges for the country as it heads into elections. The screening will be followed by a discussion with key experts. RSVP here and take a look at the trailer. Make sure to use #EgyptLastWord when sharing.

Four journalists–Aung Zaw (The Irrawaddy, Burma), Siamak Ghaderi (freelance journalist, Iran), Mikhail Zygar (Dozhd TV, Russia), and Ferial Haffajee (City Press, South Africa)–will be honored with awards in recognition of their courageous reporting in the face of severe reprisal. Jorge Ramos, co-anchor on Univision News, will be honored with the Burton Benjamin Memorial Award for lifetime achievement in the cause of press freedom.

Press freedom and the Olympic movement

In Ebola-stricken countries, authorities and journalists should work together

How resistance to encryption jeopardizes journalism

Duvalier’s death must not mean end of proceedings against dictatorship

Does Burma’s Army Still Hold a License to Kill?

Victims of Isis: non-western journalists who don’t make the headlines

How to cover the Islamic State — and survive

The Case for Automatic Encryption, Especially for Journalists

More On:
Our Impact