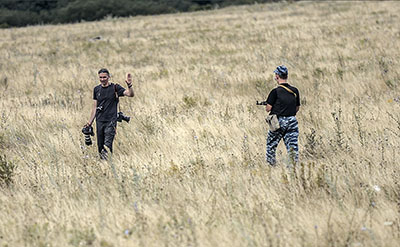 Muzaffar Suleymanov, CPJ’s Europe and Central Asia Research Associate, traveled to Kiev on July 6 on a week-long fact-finding mission and spoke to more than a dozen local and international journalists about press freedom conditions in the country. Suleymanov also met with journalists who had covered or were covering the ongoing violence in eastern Ukraine.

“Journalists and partners asked for our continued support–specifically in Crimea, where the upcoming enforcement of restrictive Russian laws on January 1, 2015, could virtually silence remaining journalists and rights activists,” Suleymanov said.

Since the beginning of the crisis in Ukraine in November 2013, CPJ has documented frequent anti-press violations, including attacks on reporters, blocked broadcasting, and abductions and even killings of journalists. Suleymanov distributed to local journalists the Russian translation of CPJ’s Journalist Security Guide, which is also available in Arabic, Chinese, English, French, Somali, and Spanish.

“CPJ will continue to survey the situation on the ground and advocate for an environment in which journalists can report without fear of intimidation, harassment, and imprisonment,” Suleymanov said.

Journalists freed from prison in…

After being imprisoned on charges of libel, false publication, and anti-state propaganda, Yusuf Abdi Gabobe, chairman of Haatuf Media Company, was released after receiving a presidential pardon on July 13. CPJ had covered Yusuf’s imprisonment, as well as the shutdown of the independent paper Haatuf, and urged Somaliland authorities to stop targeting the press.

Yusuf was jailed in May after Somaliland’s energy minister filed a complaint about articles alleging government corruption that were published in Haatuf and the English weekly Somaliland Times. Both papers are owned by Haatuf Media Company.

“While we are pleased to hear of his release, the government should also lift its arbitrary suspension of Haatuf and end its ongoing trend of suspending critical news outlets,” said CPJ’s East Africa representative, Tom Rhodes.

CPJ welcomed the release from jail this month of Siamak Ghaderi, an Iranian journalist who the organization highlighted in its “Ten journalists to free from prison” report, published in April in the run-up to World Press Freedom Day.

Ghaderi was arrested in July 2010 and convicted in January 2011 on charges of “propagating against the regime,” “creating public anxiety,” and “spreading falsehoods.” He was sentenced to four years in prison. On his blog, IRNA-ye maa (Our IRNA), Ghaderi had covered street protests and other developments following the contested 2009 presidential election.

Ghaderi’s wife told the International Campaign for Human Rights in Iran in May 2013 that the journalist had not been allowed a single day of furlough and that he had received lashes in prison.

This month, CPJ’s Middle East and North Africa program concluded its 26-day-long social media campaign that “live tweeted” major events in the Iranian crackdown five years ago. The program also updated a Storify page with the campaign’s tweets. The campaign was covered by local and international outlets, including BBC Farsi.

The campaign called for the end of the press crackdown in Iran that began on June 12, 2009, the day of the tumultuous presidential elections. That day, at least nine journalists were behind bars; 26 days later, CPJ announced Iran had officially become the world’s worst jailer of the press with 30 journalists in jail.

Iran has ranked among the world’s top three worst jailers of the press every year since. In 2013, Iran was holding at least 35 journalists in jail, according to CPJ research. On July 25, Iran confirmed that authorities were holding Washington Post correspondent Jason Rezaian, his wife, Yeganeh Saleh, and two others. They have not yet revealed any charges against them.

Askarov is serving a life term after being convicted on charges that included incitement to hatred and complicity in the murder of a police officer. A number of human rights and press freedom groups, including CPJ, have concluded that the charges against him were fabricated. CPJ has been calling for Askarov’s release since he was taken into police custody in 2010.

CPJ has written letters to the Kyrgyz government and has consistently reported on his case, including submitting research to the U.N. Human Rights Committee’s Universal Periodic Review of Kyrgyzstan. In 2012, CPJ honored Askarov with its 2012 International Press Freedom Award.

CPJ’s advocacy on Askarov’s case is now a key component of the journalist’s complaint before the UN Human Rights Committee, which was prepared by the Open Society Foundation and filed by Askarov’s defense. In May 2013, CPJ’s Journalist Assistance program helped cover urgent medical treatment for Askarov and helped to cover the cost of his family’s visits to the prison.

Your gift can go even further! Choose the “Recurring gift” option on the donation page and your monthly gift will help protect journalists who face persecution for their work.

Ever broader restrictions handed down for China’s reporters