Naziha Rejiba, editor of the Tunisian online publication Kalima and a 2009 International Press Freedom Awardee, helped us launch the new edition of Attacks on the Press at a press conference today in Cairo. 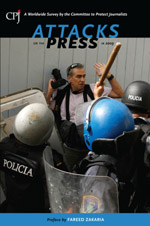 Rejiba offered a biting description of the harassment she and her Tunisian colleagues face. “They don’t kill us physically … but they assassinate our characters,” Rejiba said, noting that Tunisian state media are regularly used to smear government critics. She urged Tunisian journalists and their Arab counterparts not to be co-opted into taking part in such character assassinations.

She also noted the government’s efforts to deter potential advertisers and investors from doing business with independent media, and, more directly, its detention and harassment of critical journalists and their families. “They kill us economically. … They starve us by depriving us of our and our livelihoods. And they don’t stop there; they often also target our family members,” said Rejiba, whose husband was once the target of a vicious government smear campaign.

About 20 Egyptian, regional, and international journalists attended today’s press conference, asking CPJ Middle East representative Kamel Labidi and me a number of tough, thoughtful questions. We plan to come back to the region next year to launch the next edition of CPJ’s annual survey.

CPJ Middle East and North Africa Program Coordinator Mohamed Abdel Dayem has a master’s degree from the School of Advanced International Studies at Johns Hopkins University. He has led CPJ missions to Egypt and Yemen.