From Ebola to a Nuclear Meltdown:

Zimbabwe, declared August 2008, cholera outbreak At the height of the outbreak, new patients were being registered at a rate of one per minute. Hospitals were short on staff, medicine, food, and equipment. Authorities denied and then downplayed the crisis, accusing reporters of trying to tarnish the nation’s image. Killed: 3,623 Affected: 76,127

Pakistan, confirmed July 2011, dengue fever outbreak A heavy monsoon season led to ideal conditions for mosquito breeding. Local media criticized the government for dragging its feet on the health crisis, which claimed the life of a former president of the East Pakistan Union of Journalists. Killed: 300 Affected: 20,000

Sources: World Health Organization, United Nations, World Bank, CNN, New York Times, Businessweek, Public Radio Exchange, Committee to Protect Journalists.
Outbreaks of the Ebola virus in Central Africa, the Severe Acute Respiratory Syndrome, or SARS coronavirus, in Asia, the H1N1 virus in tropical and other regions of the world, and cholera in Haiti are all examples of health epidemics that severely tested news media. Events involving bioterrorism as well as chemical and radiation emergencies pose yet another set of risks for the reporters and photojournalists covering them. As described in Chapter 7, freelancers should know that they may have to address risks and accept consequences on their own. A freelancer wishing to cover a health epidemic or mass hazard would do well to contact editors in advance to secure interest in possible stories, and to determine the level of institutional support a news organization might provide. 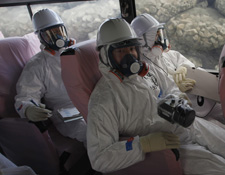 Any journalist planning to cover a disease epidemic or a manmade health emergency should be in good health, have an immune system that is not compromised, and have no existing condition that could predispose him or her to illness. Before traveling to an affected area, consult the World Health Organization’s International Travel and Health handbook along with its region-specific publications, as well as the U.S. Centers for Disease Control and Prevention’s Emerging Infectious Diseases Journal. The World Health Organization provides guidelines for specific diseases, explaining the science behind a disease and measures to avoid infection. In 2005, the organization released a journalists’ handbook on the influenza pandemic. Health bulletins, regional updates, and travel restrictions are accessible on the international organization’s website, which is available in many languages. The World Health Organization and the U.S. Centers for Disease Control and Prevention each provide information on biological, chemical, and radioactive emergencies. These sources and others should be frequently checked for any updated information. Both sites offer podcasts, RSS feeds, and other updated information to help journalists stay on top of developments as they occur. Consult a health care professional before departure. Receive recommended vaccinations and allow sufficient time for them to work. (See the section Medical Care and Vaccinations in Chapter 1.) Be sure your medical kit is updated with gear and medication specific to the risks you will face on an assignment. (See Appendix A Checklists.) Bring as much medication as allowed, because there may be shortages locally. Review your medical insurance as well to see if it will cover treatment and other expenses likely to be incurred in case of illness, including the cost of emergency medical evacuation. Journalists and others might be denied permission to leave an outbreak zone if they become ill. This could expose you to further physical as well as psychological injury. Keep in mind that any serious health emergency could overwhelm local health facilities, so prepare alternative plans.

Journalists should always prioritize their own safety. No story is worth your life, and if you were to be killed or become ill from exposure, you would become a burden instead of an asset. Even the combination of good health and vaccination are no guarantee of avoiding a disease. Wash your hands frequently and immediately after any possible exposure, as recommended by the World Health Organization’s International Travel and Health handbook, which is updated annually. Carry hand sanitizer in any such situation. Avoid potentially contaminated food and water. Avoid any possible contact with bodily fluids, skin, mucous membranes, and related medical waste. Learn how the disease in question is transmitted, and then take the appropriate precautions. The World Health Organization lists seven ways diseases can be spread: through food and water, vectors such as mosquitoes, infected animals, soil, air, and sexual contact or contact with blood and bodily fluids. Precautions include sleeping under bed nets, avoiding sexual contact, and, if possible, avoiding crowded situations and confined spaces. Learn how specific mass hazards may be spread. Bioterrorism and other biological hazards could include anthrax, botulism, brucellosis, plague, smallpox, tularemia, and viral hemorrhagic fevers, according to the U.S. Centers for Disease Control and Prevention. Each biological agent is distinct in the way it is spread, its symptoms, prevention, and treatment. There are other chemical agents that can be of military, industrial, or natural origin. Similarly, each chemical agent will spread differently and require its own form of protection and treatment. The U.S. Centers for Disease Control and Prevention and the U.S. Department of Health and Human Services provide information on radiation emergencies, including the effects of dirty bombs, nuclear blasts, nuclear reactor accidents, and transportation accidents. Exposure to radiation can produce short- and long-term conditions, including some effects that may become apparent years later.
Learn the science of a health or mass hazard. Take precautions, adapt your behavior, and obtain protective gear. Even then, some situations may be too risky.
Learn the science of any biological, chemical, or radiation threat. “In a radiation emergency, you can think of distance, time, and shielding as protective devices,” New York Times editors wrote in a 2011 document prepared for their reporters. “Distance means not getting too close to a spill of radioactive material or other sources of radiation. Time means that if you are in an area that your dosimeter indicates has radiation, don’t stay longer than you have to. In certain circumstances, you may also gain some protection by taking shelter in a concrete or brick building.” The danger may be imperceptible. “The radioactivity meter is going up, but you don’t feel a thing,” Tetsuo Jimbo, Japanese journalist and founder of the website Videonews, told CNN in 2011 after he traveled with a Geiger counter into Japan’s nuclear quarantine zone near the damaged reactor at Fukushima. “You don’t smell anything, you don’t feel heat, you just don’t feel a thing. And that’s actually the most scary part of the whole trip.” Extreme caution is required in every case. Journalists and others must realize in advance that some scenarios would be simply too dangerous to cover as long as the threat persists. Journalists should research the specific threat and the agent’s possible duration, as well as all protective measures or equipment that may be needed. The list of recommended equipment is extensive in severe cases. Antidotes to counteract hazardous agents should be obtained only though qualified medical experts, as they are specific and limited in their use and carry considerable risk. Do not hesitate to ask your employer or assigning news organization to purchase protective gear. At the same time, be aware that even the best measures and state-of-the-art equipment may be ineffective in severe situations.