On June 19, Abdülhamit Bilici, the last editor-in-chief of the now-shuttered Turkish paper Zaman, tweeted about the decline of press freedom in his home country. If you can see his tweet, you are probably not in Turkey because it is among the over 1.5 million tweets belonging to journalists and media outlets censored there under Twitter’s “country withheld content” (CWC) policy. 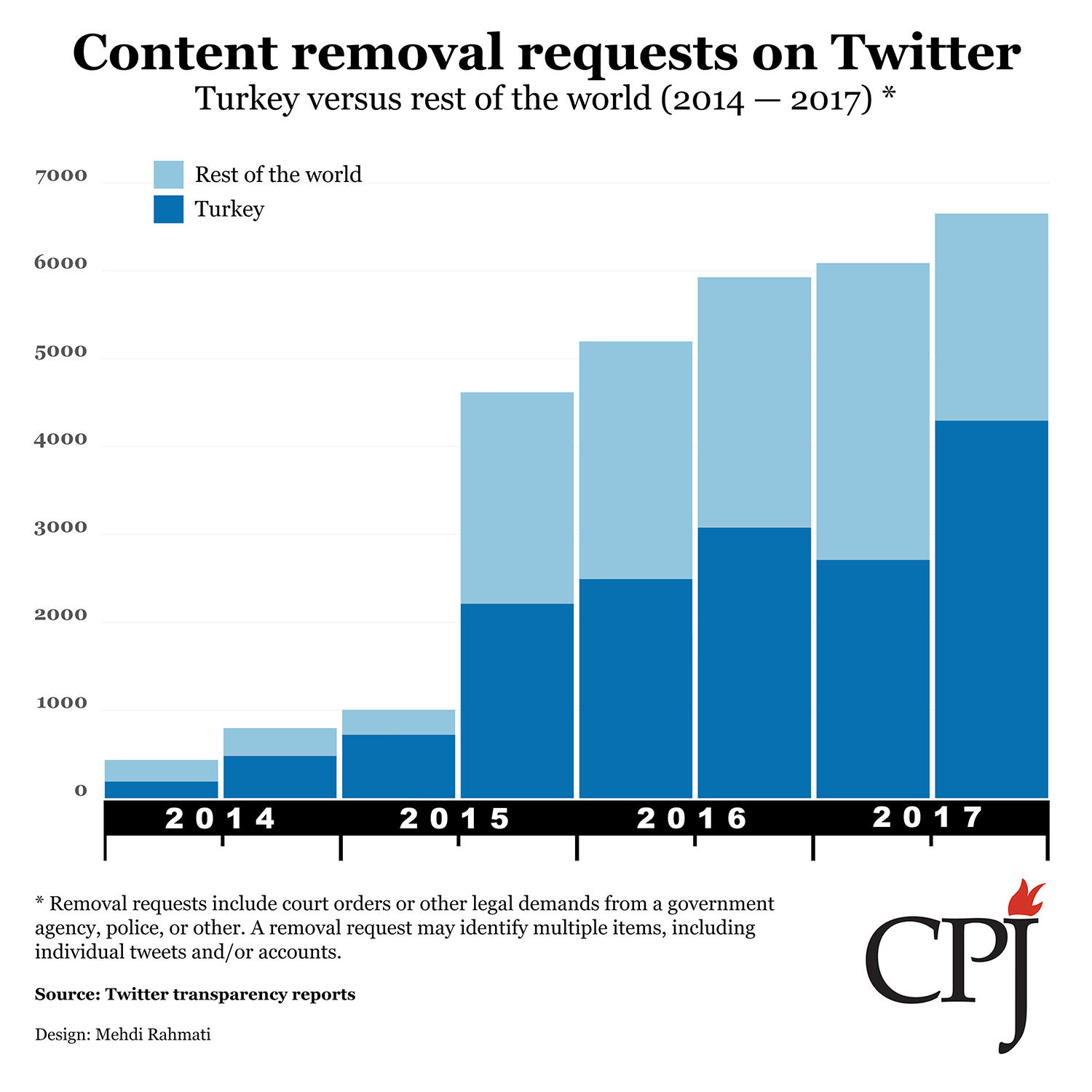 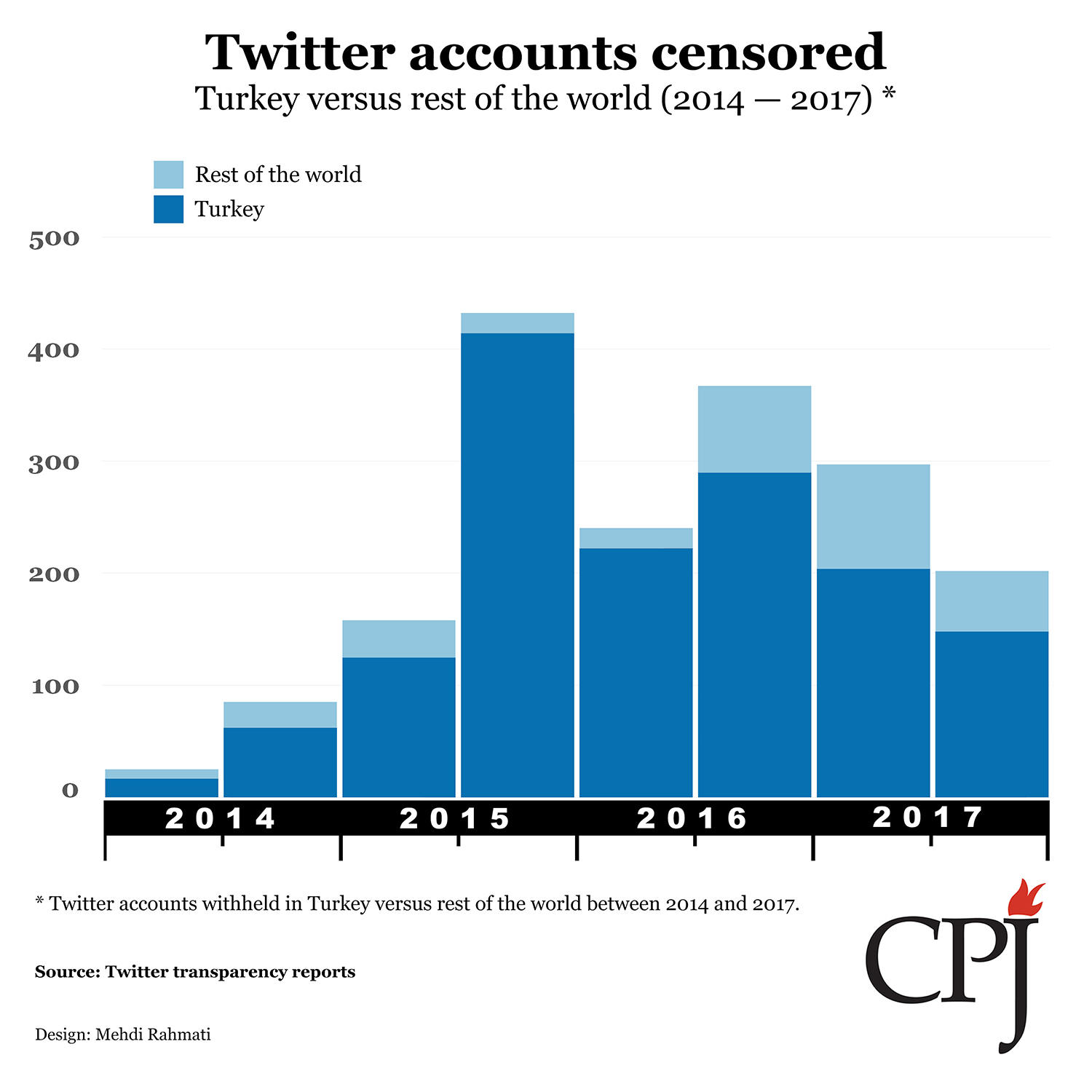 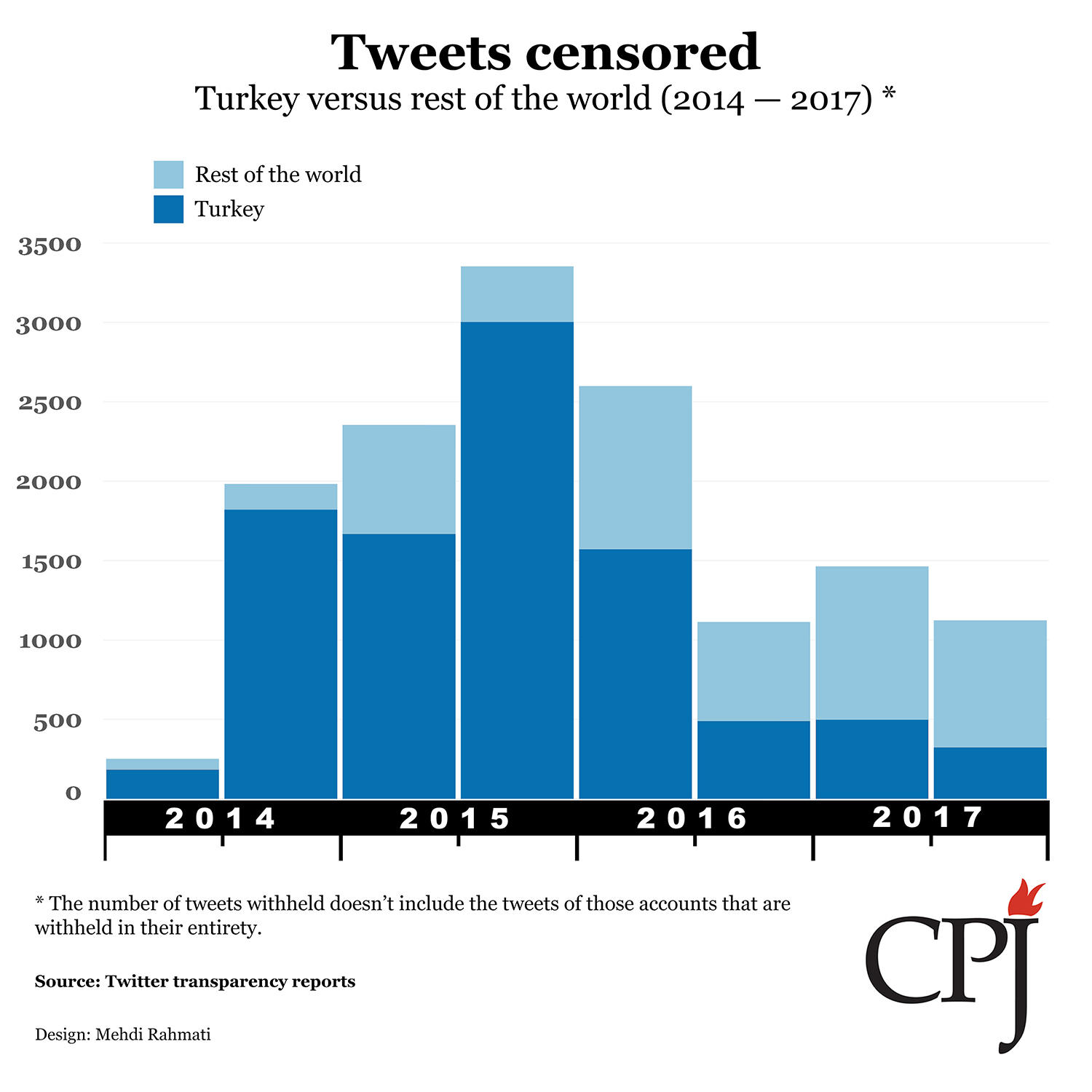 Figures from Twitter transparency reports show that legal demands to remove content on the platform went from 432 requests in the first part of 2014 to 6,651 requests in the second part of 2017. Turkey and Russia were responsible for 74 percent of all requests during that period. As legal demands can specify more than one account and/or tweet, over 78,000 accounts were reported by governments during that period. Twitter complied fully or partially with 24 per cent of legal demands from Turkey, compared with about 9 percent for the rest of the world. Facebook’s transparency reports for the same period show it made close to 154,000 content restrictions worldwide. In the second part of 2017 in Turkey, more Twitter accounts were withheld and Facebook content restricted than in any other country.

When CPJ reviewed a Buzzfeed News database of over 1,700 accounts withheld in one or more country, along with court orders uploaded by tech companies to Harvard University’s Lumen database, tweets, Twitter lists, and news reports, it was able to identify at least 59 Twitter accounts that belong to journalists and media outlets censored using the CWC tool in Turkey. As of late July, those 59 accounts had a combined following of over six million, in a country of about 11 million Twitter users.

Journalists whose accounts have been censored by CWC requests told CPJ that Twitter is inconsistent with its compliance with such requests and complained about the lack of remediation options.

Bilici told CPJ, “It is a shame that Twitter silences a journalist already silenced by an authoritarian government.” The journalist is living in exile in the U.S. after Turkey seized and then shuttered his paper for its close ties to the Hizmet movement that Turkey accuses of being a “terrorist organization” and being behind a failed attempted coup in July 2016.

Bilici said, “I challenge both Twitter and the Turkish government to [find in my tweets] anything that can be considered illegal or harmful. My only crime is being a journalist.”

Efe Kerem Sözeri, a Turkish researcher based in the Netherlands, said, “Twitter, Facebook, [and] Google…are responsible to their shareholders primarily, I don’t consider them as guardians of the free speech. But the imbalance in the tools they offer to users versus governments make them complicit in the authoritarian rulers’ crackdown against opposition.” 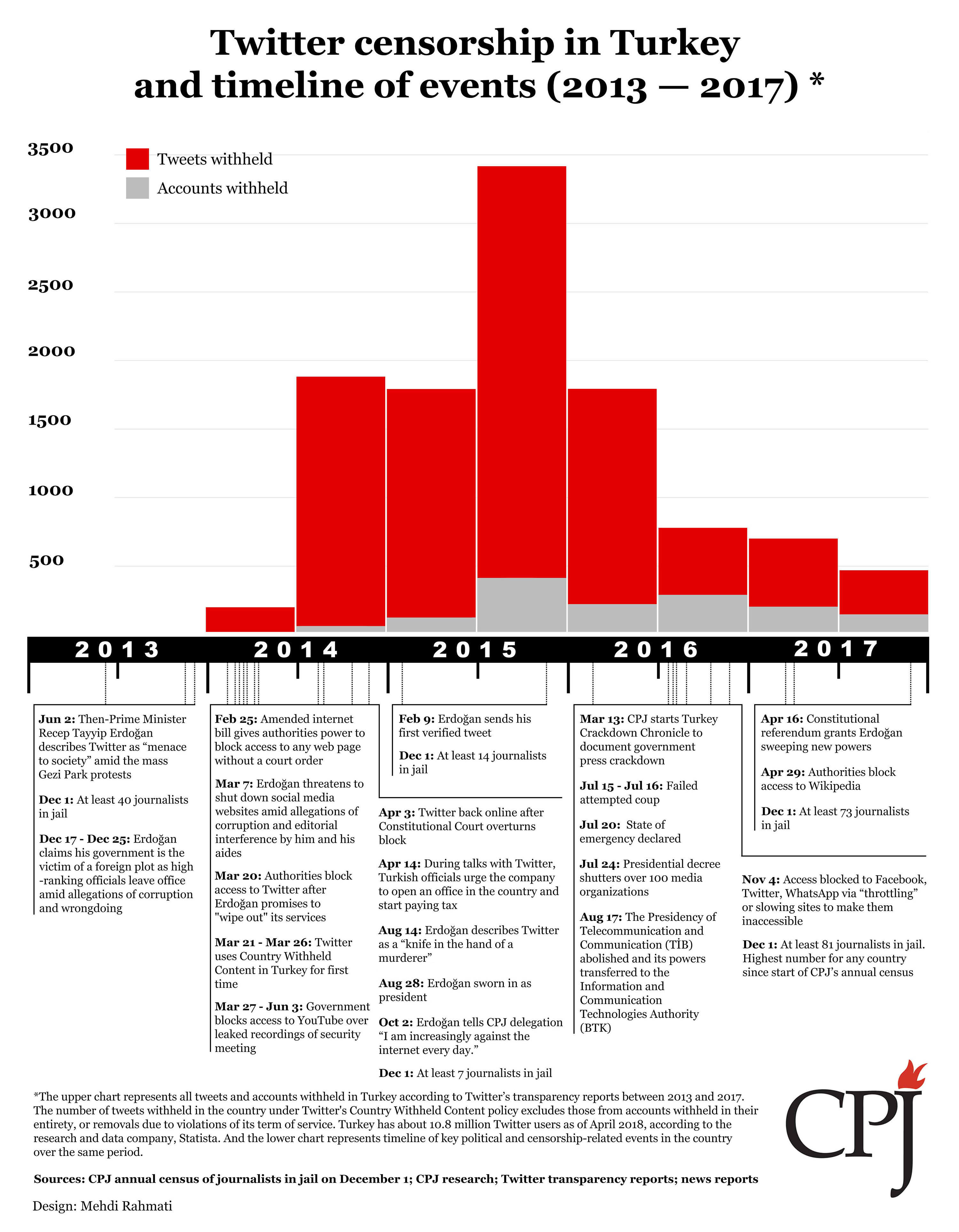 Twitter’s co-founder Jack Dorsey has previously tweeted that his platform stands for speaking truth to power, but its policy and data show that Twitter may comply with requests to withhold content if the platform receives “a valid and properly scoped request from an authorized entity.”

Colin Crowell, Twitter’s head of global public policy, told CPJ, “If [we] don’t use CWC, then the alternative is to remove [the content] globally [then] nobody can see it.”

Soon after Twitter recorded its first CWC use in Turkey during a two-week ban on the platform in 2014, then-Deputy Prime Minister Beşir Atalay told the press that “Twitter now toes the line.” Since then, Turkey has used the tool to withhold 1,482 accounts (82 percent of all accounts ever withheld worldwide), and 9,552 tweets (67 percent of all tweets withheld worldwide), according to Twitter’s transparency reports.

Asked whether Twitter is worried that Turkey might be misusing the tool to silence journalists, Crowell told CPJ, “We are obviously concerned about it to the extent we go to court to challenge it.”

It is rare, however, for Turkish courts to accept Twitter’s legal objections. Between 2014 and 2017, they accepted less than 3 percent, according to Twitter’s transparency reports.

Getting a court order to censor journalists is not a hard task in Turkey which, according to CPJ research, is the world’s worst jailer of journalists. Human Rights Watch said in 2014 that “Turkish courts have tended to accede to government requests to block websites with apparent minimal, if any, scrutiny.”

The country’s court system has also been criticized by the Council of Europe Venice Commission. In an opinion on Turkey’s peace judgeships, which rule on cases of internet blocking via a “horizontal process” in which appeals are heard by other peace judges rather than higher courts, the commission found courts could be “capable of becoming an instrument of oppression.” It found that peace judges, who gained new powers under the state of emergency, were burdened with ruling on traffic offenses, in addition to more pressing cases. The judges “rubberstamp all administrative bans, basically converting them into court orders,” Sözeri said.

Court documents viewed by CPJ show how an Ankara court in August 2016 ordered Bilici’s Twitter account, which has over 210,000 followers, to be blocked for “promoting terrorism, violence, and threatening national security and public order.” The order, made under law 5651 that regulates internet publications, specifies tens of other websites and Twitter accounts, including those of journalist Celil Sağır, who is also in exile, and jailed journalist Hanım Büşra Erdal. Sağır had four of his Twitter accounts blocked in Turkey between 2014 and 2016.

Amendments to law 5651 in 2014 gave authorities power to block sites without a court order. Google transparency reports show that since the amendments came into effect, the majority of removal requests came from judicial rather than executive orders.

Law 5651 is “a very fast-track system [to block content] with almost no checks,” Sözeri said.

Erkan Saka, an assistant professor at the School of Communication at Istanbul Bilgi University who met with Twitter during its meetings with members of Turkish civil society and the private sector in 2014, said that “without being blocked, [some Turkish users] stopped tweeting or…went underground, [as they are] frightened to speak out.”

Twitter, Facebook, Blogger, and YouTube are not the only social media sites affected by Turkey’s crackdown through legal demands. Between July and December 2016, 75 of the 96 government takedown requests reported by Tumblr in its transparency reports came from the Turkish government, affecting 144 blogs. Tumblr complied in 16 percent of cases.

“After Gezi, internet blocking was intensified by legal measures, but also beyond legal measures, there were political trolls, and more technical measures like centralized governance of the internet, centralized filtering system, internet throttling, and most likely deep packet inspection-based surveillance,” said Saka, referring to the nationwide Gezi park protests in 2013.

In his U.N. report on regulation of user-generated online content published earlier this year, David Kaye, the U.N. special rapporteur on the promotion and protection of the right to freedom of opinion and expression, recommended that “companies should recognize that the authoritative global standard for ensuring freedom of expression on their platforms is human rights law, not the varying laws of states or their own private interests.”

Ahmed Zidan, CPJ’s deputy director, digital and social media, previously worked as social media editor of Radio Netherlands Worldwide, reporter and contributor to the Arabic desk at RNW (Huna Sotak), and editor of ArabNet. He was the editor of Mideast Youth, which won the 2011 Best of Blogs award from Deutsche Welle. Follow him on Twitter @zidanism. His public PGP encryption key can be found here.