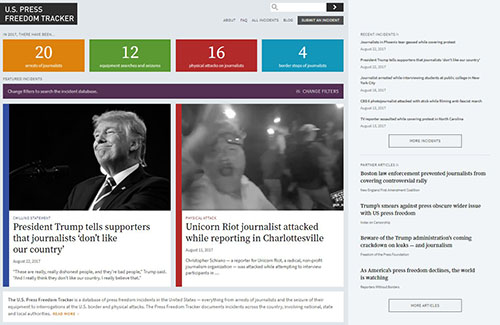 “I’m really doing this to show you how damned dishonest these people are,” President Trump said during his August rally in Phoenix. “Truly dishonest people in the media and the fake media, they make up stories. … They don’t report the facts.”

President Trump’s comments, as reported by TIME, were included in the U.S. Press Freedom Tracker this month, a website CPJ launched in early August to document press freedom incidents and violations that take place in the United States under the Trump administration.

The tracker also included a story from the New York City news website Gothamist about a journalist who was arrested while interviewing students at a local college. Even though the reporter had press credentials, college public safety officers told the reporter to leave, and then restrained and handcuffed him before issuing a summons. Another incident included in the Tracker was a report by Albany, New York’s CBS 6 that documented how one of the television channel’s photojournalists was taken to the emergency room after a protester assaulted him.

“Stories like these are vital to include in the U.S. Press Freedom Tracker, because they illustrate the much bigger challenges to press freedom this country is facing right now,” said Alexandra Ellerbeck, CPJ’s North America program coordinator and chair of the Tracker’s steering committee.

CPJ joined with 22 partner organizations to launch the U.S. Press Freedom Tracker, the first centralized source of data of its kind. Click here to check it out!

In August, CPJ welcomed Jacquelyn Iyamah as the inaugural Patti Birch Gender and Media Fellow. The fellowship was established in June following a generous grant by the Patti and Everett B. Birch Foundation.

Iyamah, who is based in Washington, will spearhead a project investigating the intersection of gender and press freedom. CPJ spoke to Iyamah about her new role.

What drew you to CPJ?

As an aspiring socio-political journalist, I’m not only interested in journalism, but also advocating for its importance―like CPJ does! Journalism is essential to shedding light on injustices, particularly those affecting marginalized communities.

Gwen Ifill, one of my role models, embodied these ideals. Despite threats of a racial and sexual nature, Ifill persisted in her work because she felt she had a duty to speak out for those who often fall through the cracks. That’s the type of journalist I aspire to be, and I believe that working at CPJ―an organization very much in line with these values―will motivate me to do just that.

How do you see yourself helping in CPJ’s mission to promote press freedom in your new role?

Most of the work I did before joining CPJ focused on highlighting narratives of groups that are frequently forgotten. At the Friends Committee on National Legislation, I advocated for economic justice, and at the Ella Baker Center, I advocated for racial justice.

My experiences there sharpened my ability to recognize and highlight stories that are frequently left in the dark. At CPJ, I look forward to applying these same skills to work to protect journalists of varying gender identities and backgrounds.

When you’re not working to eradicate injustice, what do you like to do? Any hobbies?

I’m an artist. I love painting, photography, and poetry. I’m also always up for a good workout; whether it’s boxing, soccer, or dance, I’m there.

You were raised in Geneva–how did your experiences in that city inform the work you do and the person you’ve become?

Geneva is the epicenter of global diplomacy. The values of organizations like the International Labor Organization, the World Trade Organization, and the U.N. were ever present in my formative years. Growing up in this environment made it almost impossible not to be committed to justice, equality, and peace.

“I really didn’t think people would pay attention to [me],” said Bheki Makhubu, editor of Swaziland’s The Nation magazine, to CPJ staff when speaking about his 447 days in prison.

Makhubu shared his experiences with CPJ staff and other journalists over lunch while he was in New York City in August for a meeting of CPJ’s Africa Advisory Group.

In April 2014, Swaziland authorities arrested Makhubu, along with human rights lawyer Thulani Maseko, and held both without bail for three months. In July that year, the pair was convicted on “contempt of court” charges for articles they wrote criticizing Swaziland’s chief justice. They were each sentenced to two years in prison. The judge presiding over their cases said the sentences were meant to deter journalists from similar actions in the future.

In June 2015, Makhubu was released early from prison. Maseko was released as well. “I’m very glad for the noise CPJ made while I was in jail,” Makhubu said at the August lunch. “CPJ should continue to make noise.”

CPJ featured Makhubu in its award-winning “Press Uncuffed” campaign, which highlighted cases of 13 journalists jailed all over the world. CPJ and students at the University of Maryland launched the campaign in March 2015. The students raised enough money to create bracelets emblazoned with the journalists’ names.

CPJ believes that no journalist should be imprisoned for his or her work. Our 2017 campaign, “Free the Press,” raises awareness of journalists held on anti-state charges all over the world.

In a Q&A with CPJ, Harlem Désir, the new OSCE representative on freedom of the media, discussed his plans for his role, and why his priorities include ensuring journalists’ safety, fighting impunity, and combating violent extremism online. “I am a great believer in, and fighter for, fair and democratic societies in which everyone has the opportunity to be heard and represented,” he told CPJ’s EU Representative Tom Gibson.

“Journalism is a dangerous business in Pakistan,” wrote CPJ Asia Research Associate Aliya Iftikhar in a post on CPJ’s blog in August. “Reporters there are at risk of attack or even death from militant groups, gangs, political parties, and even law enforcement and security agencies.” But now a new network of safety hubs has been set up so journalists can help provide protection for each other.

A month after Somalia’s government approved changes to its national media law, journalists and rights groups say the government has still not done enough to ease the repressive media climate. In a Q&A with CPJ, the editor of a Somali radio station explained how the law will be used to further increase restrictions on the press. If the law is passed, he said, “journalists will either [have] to accept the law and refrain from reporting the truth or face harassment and jailing from the government.”

In late July, CPJ began collaborating with photojournalists from all over the world in an Instagram campaign called “Lens in Exile.” Allowing journalists to “take over” our Instagram page gives CPJ’s audience a look at the demanding and often dangerous places in which photojournalists often work.

In August, Syrian photojournalist Loubna Mrie began publishing her work on CPJ’s Instagram page. “The first time I had to leave my home in the west coast town of Latakia, Syria, was in 2012 when the area was controlled by the government,” she wrote in one of the posts. “Over the next few days I will be sharing some of the images I took in Syria before I left the country for the last time.”

The first journalist to take over CPJ’s Instagram page was Egyptian photojournalist Mohammed Elshamy. Elshamy left Egypt in 2014 after his brother Abdullah Elshamy, also a journalist, was imprisoned. “We might get arrested, abducted, traumatized or even killed, yet we continue to document the world’s tragedies and … the truth,” Elshamy wrote in a post. “Sometimes, people don’t even know who we are or where we come from. We risk our lives and fear we will die in vain.”

Sign up for the 2017 James W. Foley Freedom Run

Sign up here to run (or walk) the 5K for the James W. Foley Legacy Foundation. The foundation was founded to defend press freedom worldwide after the murder of U.S. freelance journalist James Foley in 2014.

The 2017 Foley Freedom run will be held on Saturday, October 14 in New York City, but you can run from anywhere! Just post your pictures on social media using the hashtag #IRunForJim.

Once you register, you’ll be sent a T-shirt. And if you can’t run yourself, you can support a local team or just donate to the foundation. You can also fundraise for your run–people who raise at least $200 will receive their very own James W. Foley Freedom Run/Walk glass.

Consider getting your employer to match your CPJ donation!

CPJ accepts funding from individuals like you as well as the companies, organizations, corporations, and foundations that you work for. But did you know that many of your employers will match your donations? This is free money that you could be using to double–and sometimes even triple!–your gift.

For instance, General Electric will match its employee’s gift (dollar for dollar) from $25 up to $25,000. If you work for Apple, they’ll match your donations up to $10,000. Johnson & Johnson will match a full-time employee’s donation at a two-to-one ratio all the way up to $20,000! Even Starbuck’s and Google have employee matching systems in place!

Curious if your company will match your gift? Just ask.

“The world is watching Trump’s attacks on the press,” CNN

“In the trenches of Trump’s leak war,” Vanity Fair

“Journalists in peril around the globe as US cedes leadership role,” The Hill

“‘The Mideast’s only democracy’ goes to war on press freedom,” The New York Times