CPJ releases Attacks on the Press

CPJ launched the 2017 edition of our annual publication Attacks on the Press at two events on April 25. The book, “The New Face of Censorship,” explores the evolution of censorship tactics into sophisticated tools used to control the flow of information around the world.

Nearly 500 U.S. and international media outlets, including Newsweek, MediaFiled, The Boston Globe, the Press Gazette, Radio Free Europe/Radio Liberty, and the Somaliland Press, reported on the book’s release. The book is available to read online or in a hard copy through Bloomberg Press, an imprint of Wiley. CPJ gratefully acknowledges the generous support from Bloomberg, which underwrites the annual publication of Attacks on the Press.

“You have quickly reduced a free press to one of subservience,” said Alan Rusbridger, former editor-in-chief of the Guardian, at a discussion panel launching Attacks on the Press at Oxford on April 25.

Rusbridger, who is also a CPJ board member, wrote a chapter on censorship in Kenya for the book. “They have developed a more sophisticated way of getting the outcome they want,” he said.

The other panelists included Lindsey Hilsum, international editor for Channel 4 News; Jon Williams, managing director of news and current affairs at Irish broadcaster RTÉ and a CPJ board member; and Joel Simon, CPJ’s executive director. Razia Iqbal, presenter for “Newshour” on the BBC World Service, moderated. The panel was attended by about 100 individuals and was followed by a Q&A session.

CPJ’s other launch event was held at Columbia Journalism School in New York. The panel, called “Defeating the Censors,” was moderated by CPJ Editorial Director Elana Beiser. Bloomberg Technology’s Karen Amanda Toulon, a CPJ board member, made opening remarks, and Sheila Coronel, director of the Stabile Center for Investigative Journalism and Columbia University professor and also a CPJ board member, welcomed the panelists and the audience. The event was sponsored by Bloomberg News.

The panelists–Zelalem Kibret, an Ethiopian blogger for Zone 9, whose members won CPJ’s 2015 International Press Freedom Award; John Daniszewski, editor-at-large for standards at The Associated Press; Loubna Mrie, an activist and former Reuters photographer, from Syria; and Alan Huffman, a freelance journalist, photographer, and editor–discussed ways to get around censorship in the new and changing technology-driven world.

Check out CPJ’s Twitter page to read the live-tweeting or sign up here to get breaking news alerts and read more about CPJ’s work!

CPJ welcomed the release from prison in April of Chanda Chimba, a Zambian journalist who had been sentenced to two years in prison in November 2016. Chimba was charged with failing to register his production company and two newspapers and of possession of property suspected to be proceeds of a crime.

Chimba, who had produced a pair of documentaries critical of a politician, was the only journalist jailed in southern Africa on December 1, 2016, when CPJ last conducted its global prison census. CPJ privately petitioned the Zambian government to release him.

The journalist was released from prison on April 21 following a pardon on humanitarian grounds by the Zambian president. Chimba has advanced prostate cancer.

CPJ to release report on journalist murders in Mexico 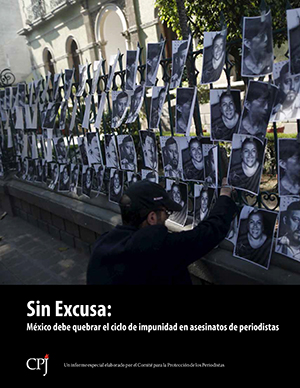 On May 3, World Press Freedom Day, CPJ will release a special report highlighting impunity in journalist murders in Mexico.

Since 2010, CPJ has documented more than 50 cases of journalists and media workers killed or disappeared. The violence is particularly acute in Veracruz state, where attacks on the press went unpunished during former Governor Javier Duarte de Ochoa’s term. Mexico is one of the most dangerous countries in the world for journalists, with endemic impunity allowing criminal gangs, corrupt officials, and cartels to silence their critics.

CPJ will launch the report at a panel discussion in Veracruz City as part of a mission of solidarity with our Mexican colleagues. We will also meet with government officials in Mexico City to advocate for an end to impunity.

CPJ joined with 29 other organizations this month to launch the Fly Don’t Spy campaign, which supports the rights of journalists to protect their confidential information when traveling.

The campaign, hosted at the FlyDontSpy.com website, asks individuals to sign a petition calling on John Kelly, secretary of U.S. Department of Homeland Security, to reject any proposal requiring visa applicants, refugees, or foreign visitors to provide passwords for online accounts before entering the United States.

“Secretary Kelly,” the petition reads, “we urge you to protect human rights and reject the collection of passwords for entry into the United States.”

Make your voice heard and sign the petition today!

In Yemen, a lack of information and any due process of law results in a dangerous environment for journalists in the country to carry out their work. Justin Shilad, CPJ’s Middle East and North Africa research associate, highlights in a blog post, called “Collapse of state institutions leaves Yemeni journalists vulnerable,” how journalists are facing mounting risks, especially in areas controlled by the Houthi rebels.

In a post called “Proposed German legislation threatens broad internet censorship,” CPJ Advocacy Director Courtney Radsch examines a draft law approved by the German cabinet in early April that is aimed at combating disinformation and hate speech. The Global Network Initiative, of which CPJ is part, issued a statement expressing concern that the law would restrict freedom of expression and privatize censorship.

On April 24, CPJ condemned the 10-year prison sentence handed to Cameroonian journalist Ahmed Abba, a correspondent for Radio France Internationale’s Hausa service, on charges of terrorism. Abba was included in CPJ’s 2015 and 2016 prison censuses, and was the first journalist highlighted in CPJ’s 2017 “Free the Press” campaign, which raises awareness of journalists imprisoned on anti-state charges around the world.

Join CPJ and ProPublica for a screening

CPJ is partnering with ProPublica and New York University’s Tisch School of the Arts and Arthur L. Carter Journalism Institute to host a free screening of “Dateline-Saigon” on May 4 at NYU’s Iris and B. Gerald Cantor Film Center.

“Dateline-Saigon” chronicles the work of five journalists from news outlets in the U.S. who were determined to expose the true story of the Vietnam War. The film will be followed by a panel discussion with director Thomas D. Herman, CPJ Executive Director Joel Simon, and Jay Rosen, NYU journalism professor. Robin Fields, managing editor of ProPublica, will moderate the debate.

RSVP now to attend the film!