CPJ continues to advocate for journalists and press freedom in the United States. In a February 25 op-ed published in The New York Times titled “Trump is damaging press freedom in the U.S. and abroad,” CPJ Executive Director Joel Simon argued that the U.S. administration’s attacks on the media undermine “trust by sowing confusion and uncertainty about what is true” and do damage outside the United States, “where America’s standing as a global beacon of press freedom is being drastically eroded.”

Over the weekend, our deputy executive director, Robert Mahoney, spoke on CNN about reporters being barred from a February 24 press secretary briefing, among other issues, and to Democracy Now! about the global effects of U.S. President Donald Trump’s actions against the press. Mahoney told The Guardian that such attacks do not help CPJ’s work “trying to deal with countries like Turkey, Ethiopia, or Venezuela, where you have governments who want nothing more than to silence and intimidate the press.”

When Trump tweeted that the media “is the enemy of the American people,” we joined in on the hashtag #NotMyEnemy that began making the rounds on social media. We also published a short video featuring 11 journalists who lost their lives in the past 25 years in pursuit of the news. The video reached more than 110,000 people and was viewed over 42,000 times. You can see it here.

CPJ works hard to document each violation of press freedom, both in the United States and globally. On February 1, as U.S. Senator Marco Rubio spoke at a Senate session to consider the nomination of Rex Tillerson for Secretary of State, he cited CPJ data on journalists killed and imprisoned around the world in 2016. “Ultimately … as champions of human rights, they need the information to expose abuses and call for reforms,” Rubio said. “Without independent journalists, without information, tyrants and dictatorships can get away with so much more.”

CPJ spoke to many of the U.S. journalists now facing charges, including criminal trespassing and rioting, in connection with their coverage of protests against the Dakota Access Pipeline. Two of the journalists said they were strip searched at the time of their arrest. It was “humiliating,” one said. On February 17, CPJ published a blog with a sidebar that details each journalist’s case. Court hearings for two of the journalists are scheduled for the first week in March.

Unprecedented risks to the press require a new approach

In February, CPJ published a special report, “The Best Defense: Threats to journalists’ safety demand fresh approach,” illustrating the ways in which the world has become more dangerous for journalists. The report follows the announcement in late 2016 that CPJ created an Emergencies Response Team to promote and advance journalist safety worldwide.

While reporting on wars and natural disasters is dangerous, the rise of insurgent and criminal groups around the world has posed an unprecedented risk to journalists. In August and September 2014, the world was horrified by the videotaped killings by Islamic State of U.S. journalists James Foley and Steven Sotloff. Since then, public awareness of the risks of reporting has increased, yet the dangers continue.

“I did go into conflict without training,” said one American journalist who recalled working alone in Cairo because he didn’t know better. “It was scary. I didn’t think it all through.”

Tweet: For tips on journalist safety, check out the new #CPJEmergencies report!

Meeting with the UN Secretary General to urge journalist safety

This month, CPJ’s executive director, Joel Simon, joined Reporters Without Borders Secretary-General Christophe Deloire to meet with United Nations Secretary General António Guterres to discuss the #ProtectJournalists campaign to appoint a UN Special Representative for the safety of journalists. Secretary-General Guterres pledged to the delegation that he would take action.

“As journalists around the world are increasingly under attack physically and verbally, it is encouraging and gratifying to have this kind of support from the Secretary-General,” said CPJ’s Simon. “We look forward to working with him to move this commitment forward.”

The goal of the campaign is to establish a mechanism that enforces international law, thus reducing the number of journalists killed every year. In September, CPJ joined with RSF to host a panel discussion at the UN Correspondents Association press room to raise awareness of journalist killings and of the #ProtectJournalists campaign to appoint a Special Representative to the UNSG for the Safety of Journalists.

The campaign has been endorsed by a global coalition of more than 120 organizations, including Human Rights Watch, the Rory Peck Trust, The Associated Press, and Freedom House. Coalition members including the James W. Foley Legacy Foundation, the Syrian Center for Media and Freedom of Expression, and the Pakistan Press Foundation sent letters to Secretary-General Guterres echoing the call for the appointment of a special representative.

Statistics show that despite various UN resolutions related to safety of journalists and combating impunity, there have been few concrete results on the ground. In fact, the past five years have been the deadliest on record for journalists, with hundreds of journalists killed and many more attacked simply for doing their jobs. At least 48 journalists were killed in relation to their work in 2016 alone, CPJ research shows.

On February 22, Uzbek authorities released Muhammad Bekjanov from prison. The editor of the opposition newspaper Erk had been in prison since 1999. He and his colleague, Yusuf Ruzimuradov, a reporter for the paper, were the longest-imprisoned journalists anywhere in the world, according to CPJ research.

CPJ had long called on Uzbek authorities to free Bekjanov. The journalist has been included in CPJ’s prison census each year since his imprisonment. We included him in a 2014 campaign called “Ten journalists to free from prison” and have repeatedly urged authorities to release him.

A former police officer in the Philippines on February 20 acknowledged his role in a September 2003 murder of a radio journalist and said the murder was ordered by President Rodrigo Duterte, who was then mayor of Davao City. CPJ’s alert, called “Ex-police official admits role in Filipino radio journalist’s murder,” documented the former police officer’s confession that he was involved in a “death squad” that carried out extrajudicial killings on Duterte’s orders.

In early February, CPJ Americas researcher Alexandra Ellerbeck wrote a blog, “Surveillance of journalists and court orders puts Canada’s press freedom at risk,” about how Canadian warrants to spy on journalists have created a chilling effect on the local press.

Do your part to #FreeThePress

CPJ has launched a “Free the Press” campaign that raises awareness of journalists imprisoned around the world on anti-state charges.

The first journalist featured in the campaign, Ahmed Abba, is a 38-year-old Cameroonian journalist who was arrested in July 2015. He has been charged with complicity in acts of terrorism and could face the death penalty. CPJ has called on President Paul Biya to free Abba and published a moving video about his case.

The second journalist in the campaign will be featured from February 28.

Tweet: No journalists should be imprisoned for their work! #FreeThePress 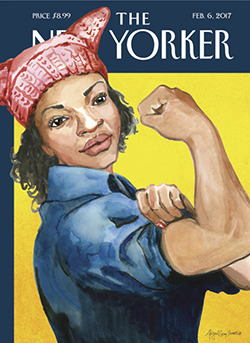 The New Yorker has announced that it will donate part of the profits from sales of T-shirts, including those featuring a February 6 cover illustration inspired by the classic “Rosie the Riveter” image, to CPJ. The shirts are on sale now, so get yours today!

Vanity Fair threw a party on February 23 to celebrate its 2017 Hollywood issue and will make a generous donation to CPJ. The cover celebrates talented and powerful women in Hollywood. Thank you, Vanity Fair!

A number of other initiatives have been announced, ranging from artwork sales and comedy shows that will benefit CPJ. We are, as always, so grateful for your support!

Donald Trump and the enemies of the American people

At-risk journalists can turn to ‘Emergencies Response Team’ for help