Since May 3, dozens of people, mostly journalists — but also including academics, activists, and an actress — have joined the campaign to act as co-editor of the newspaper as a show of solidarity.

Önderoğlu and Fincancı, whose cases are being heard in a different court, visited the Istanbul offices of Özgür Gündem following their release yesterday, the leftist newspaper Evrensel reported.

Birsi told reporters yesterday that Özgür Gündem and its staff are defendants in 149 individual trials for allegedly violating Turkey’s vague Anti-Terrorism Law, as well as 27 trials for violating article 301 of the Turkish Penal Code, which makes it a crime to insult Turkey, the Turkish nation, or the Turkish state.

Fincancı said their imprisonment was unacceptable, but added, “This situation turned into a situation that made us happy inside because we witnessed solidarity growing in waves,” recalling the 108 people who signed up for the campaign following the arrest of the three.

Önderoğlu said RSF has advocated on behalf of journalists from across the political spectrum since he began working for the group, a policy it had continued after the election of the current ruling Justice and Peace Party (AKP).

“We will try to be a part of the solidarity in terms of defending democratic values. Our solidarity will continue through friends who still face [criminal] investigations and [court] cases,” Önderoğlu told reporters.

Özgür Gündem also reported today that the Gölbaşı Court of Penal Peace in Ankara had odered regulators to block access to the newspaper’s website for readers in Turkey.

Police arrest former editor
Police in the Tarsus district of Turkey’s southeastern Mersin Province arrested Arafat Dayan, former news editor of the pro-Kurdish weekly newspaper Demokratik Ulus, according to a report in the daily newspaper Özgür Gündem. Dayan had gone to the Tarsus District Police Station to renew his driver’s license, Özgür Gündem reported, when police found an outstanding warrant for his arrest on charges the newspaper did not specify.

The website of the pro-Hizmet newspaper Yeni Hayat was blocked because of a story it ran following this week’s deadly attack on Turkey’s largest airport saying there could be 150 suicide bombers in Turkey, according to press reports. The daily newspaper Yarına Bakış reported today that regulators had blocked access to its website, and that the TİB did not offer an explanation when newspaper staff asked. The websites Subohaber.com and Onyediyirmibes.com, whose coverage is also sympathetic to the Gülenist movement, likewise wrote on Twitter that regulators had blocked the sites without explanation. CPJ was unable to reach any of the four websites using the country’s largest Internet service provider.

Court orders journalist released
The Second Court of Serious Crimes in the southeastern Turkish city of Mardin yesterday ordered the release of Bilal Güldem, a journalist for the pro-Kurdish Dicle News Agency (DİHA), pending the conclusion of his trial, according to press accounts. Güldem still faces charges of “being a member of a [terrorist] organization” and “propagandizing for a [terrorist] organization.” Police detained him on April 23 in Batman Province while he was on a reporting trip.

Court acquits columnist of ‘insulting the president’ charge
Istanbul’s Second Court of First Instance today acquitted Ender İmrek, a columnist for the socialist daily Evrensel, of charges of insulting the president in a column headlined “Can corruption, thievery, and bribing be kept secret?,” the newspaper reported. In March, Justice Minister Bekir Bozdag told parliament that his ministry had allowed more than 1,845 criminal cases on charges of insulting Turkish President Recep Tayyip Erdoğan since Erdoğan became president in 2014, Reuters reported at the time.

The court also approved indictments against the two on charges of “propagandizing for [terrorist] organization,” and ordered them released, pending trial, according to the news website Bianet. The two were arrested on June 20, alongside Cumhuriyet columnist Ahmet Nesin, for having participated in a campaign to protest authorities’ judicial harassment of the pro-Kurdish newspaper Özgür Gündem, CPJ reported at the time. It was not immediately apparent whether Nesin would also be released.

The three are among 16 people referred to trial for their participation in the campaign, Özgür Gündem‘s lawyer, Özcan Kılıç, told CPJ.

Since May, dozens of people — mostly journalists, but also human rights activists, professors, and an actress — have taken turns symbolically acting as co-editor of the newspaper to protest the regularity with which prosecutors bring charges against the newspaper’s staff for its reporting on the conflict between ethnic-Kurdish youth and security forces in the southeast of the country.

At least 41 people were killed and 239 injured in a gun and suicide bomb attack on the airport on Tuesday night, the BBC reported today.

It has become standard practice for Turkish courts to impose a ban on coverage of the investigation, broadcasting footage showing the injured, and spreading materials related to suspects in the investigation following similar attacks. Regulators have also frequently censored social media websites following attacks, though many Turkish Internet users are able to circumvent the censorship.

Internet freedom activists today shared a statement from the İnformation Technologies and Communication Institute (BTK) warning Turkish social-media users that sharing security camera footage of Tuesday’s attack — including those who “retweet” or “repost” such videos — could face legal action. In the statement, the BTK warned social media users against “serv[ing]the means of terrorism.”

Şamil Tayyar, a leading deputy of the ruling Justice and Development Party (AKP), last night told television viewers, “I wish those who criticize the news ban would die in a similar blast.” 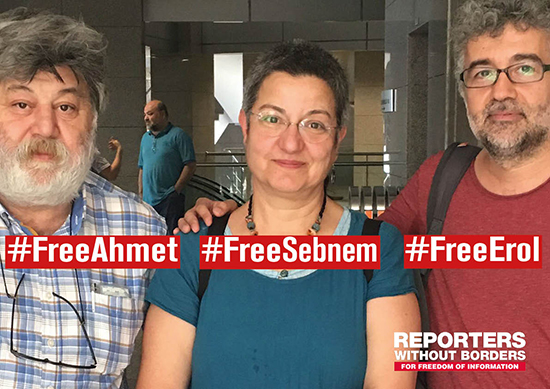 Prosecutors close investigations into eight people following show of solidarity with newspaper
Prosecutor have dropped legal investigations into eight people who participated in a campaign to show solidarity with the pro-Kurdish newspaper Özgür Gündem, according to legal documents the newspaper’s lawyer, Özcan Kılıç, sent to the Committee to Protect Journalists.

Some 55 people, mostly journalists, but also including academics, lawyers, activists, and one actress, have symbolically acted as the newspaper’s co-editor for a day since May 3 to protest authorities’ judicial harassment of the newspaper’s staff, according to Kılıç and reports from the websites P24 and Bianet. Prosecutors in Istanbul have opened criminal investigations into all of them, according to Kılıç and news reports.

The 55 people who have been investigated for participating in the campaign are:

Authorities have referred 16 people to trial on charges of propagandizing for a terrorist organization — the banned Kurdistan Workers’ Party (PKK) – and “praising a crime,” according to documents Kılıç sent CPJ:

As of June 27, prosecutors had dropped investigations into eight others who had participated in the campaign:

The campaign in support of the newspaper continues, according to press reports.

Court orders journalists detained pending trial
Mardin’s Second Court of Serious Crimes on Friday refused petitions from two reporters for the pro-Kurdish Dicle News Agency (DİHA) to be released from jail pending trial, DİHA reported. Police in on April 11 arrested Meltem Oktay and Uğur Akgül from their homes in early-morning raids, allegedly beating the two in the process, CPJ reported at the time. Oktay faces charges of “being a member of a [terrorist] organization” and “making propaganda for a [terrorist] organization,” based on her journalistic work and posts to Facebook. Akgül is charged with “making propaganda for a [terrorist] organization” only, based on her posts to Facebook, the journalists’ employer reported.

DİHA reported that at least one of the witnesses who had testified against Oktay recanted his testimony today, saying it had been extracted under torture. Both journalists denied any ties to the Kurdistan Workers’ Party, which Turkey classes as a terrorist organization, their employer reported.

The journalists’ trials are scheduled to begin individually on August 18, according to DİHA.

Four more journalists interrogated following show of solidarity with newspaper
Prosecutors called four journalists who had symbolically acted as co-editor of the pro-Kurdish daily Özgür Gündem for a day to protest authorities’ persistent judicial harassment of the newspaper’s staff to testify at Istanbul’s Çağlayan Courthouse today, according to media reports and videos posted to social media. Journalists Nadire Mater, Yıldırım Türker, Tuğrul Eryılmaz, Faruk Balıkçı, and Veysi Altay are suspected of terrorism charges in connection with the newspaper’s coverage on the days they acted as co-editor, the website Bianet reported.

Prosecutors have opened criminal investigations into at least 41 journalists who have taken turns adding their names to the masthead of the newspaper for a day since the campaign began in May, according to press reports. On June 20, an Istanbul court ordered the pretrial detention of Erol Önderoğlu, Turkey representative for the press freedom group Reporters Without Borders, Şebnem Korur Fincancı, a rights activist and columnist for the left-leaning Evrensel newspaper, and Ahmet Nesin, a contributor to the opposition Cumhuriyet newspaper, CPJ reported at the time.