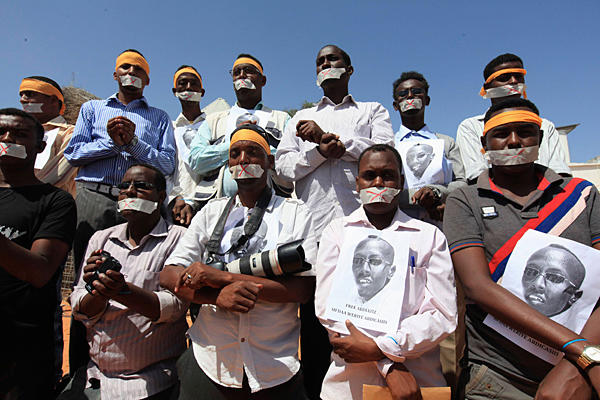 News agencies, press freedom organizations, and advocacy groups came together this month to address mounting concerns over the hiring and safety of freelance journalists. While dangers to freelancers have always been present, last year international journalists made up nearly a quarter of journalists killed, about double the proportion CPJ has documented in recent years. The murders of freelancers James Foley, Steven Sotloff, and Kenji Goto by the militant group Islamic State prompted an unprecedented collaboration between stakeholders. CPJ is proud to have helped draft guidelines for a global standard that will protect freelancers whom outlets are increasingly dependent on for stories, especially from hostile environments.

The guidelines were released at a press conference with CPJ Deputy Director Robert Mahoney at Columbia University on February 12. James Foley’s mother, Diane, also attended. “I am so encouraged by this gathering,” she said. “It’s a huge step.”

“I’ve been observing the press freedom situation in Egypt for nearly a decade and I have never seen such dismal conditions and such grave threats to independent journalists, said Courtney Radsch, CPJ Advocacy Director, after returning from a mission to Cairo this month. Both she and Middle East and North Africa Program Research Associate Jason Stern found a climate of fear and censorship when they traveled to Egypt to meet with local journalists and government officials. Although the trial of three Al-Jazeera journalists thrust Egypt’s press freedom record into the international spotlight, at least nine other journalists remain in jail in the country. In 2014, Egypt was one of the leading jailers of journalists in the world, according to CPJ’s prison census.

Journalists and press freedom groups told Radsch and Stern that protests have become too dangerous to cover. Those not registered with the Egyptian Journalists Syndicate are particularly at risk because they lack accreditation that can prove they are press and not a participant, they told CPJ.

The mission included meetings with several government officials, including Minister of Transitional Justice Ibrahim al-Henaidi. “We want the media to show the world what Egypt is going through,” al-Henaidi told CPJ through a translator. “We want thousands of journalists to come cover Egypt.”

We do too. So we plan to follow up on the visit with a letter to President Abdel-Fattah al-Sisi outlining the few but important commitments officials made to us, including an offer to visit a prison to see the situation for jailed journalists ourselves.

When Bartholomaeus Grill and Tobjoern Selander were arrested in a Mozambique village on February 16 while reporting a story for German weekly Der Spiegel about poaching, CPJ’s Africa team sprang into action. “We worked with one of the journalists, as well as the head of their legal team, and a senior editor at Der Spiegel to try to get the charges dropped,” Kerry Paterson, CPJ’s Africa program research associate, said. “We brought the incident to the attention of the officials at the Mozambique Embassy in Washington, D.C. and published an alert on the Friday afternoon. We were notified by one of the two journalists on Monday morning that all charges had been dropped, and that aside from some paperwork to complete, they were free to leave.”

World’s cartoonists team up to release I am Charlie

Following the January 7 attack on the Paris offices of French satirical weekly Charlie Hebdo that left 12 dead, including eight journalists, some of the world’s top cartoonists joined forces to produce I am Charlie, a book featuring cartoons in response to the attack. Publications and cartoonists around the world have faced tremendous pressure over decisions to publish Charlie Hebdo covers and cartoons in solidarity with the satirical magazine.

All proceeds from the book will go to the Committee to Protect Journalists.

The book is available for purchase here.

A letter of thanks from an exiled journalist

This month, CPJ received a thank you note from an African journalist who was aided by our Journalist Assistance Program after being persecuted for their work. This was one of countless letters of thanks CPJ receives each year from local journalists supported by the Gene Roberts emergency fund, which dispenses grants to journalists in distress worldwide.

[The following letter has been edited for clarity and the journalist’s name removed for security reasons.]

First of all, I would like to extend my cordial greetings to you and to your workmates.

I believe you have made a remarkable contribution to save my life & my family’s. I cannot express my feeling based on your support.

I would like to mention some points about my problems. My children stopped school. Also they were living without someone to support them. I was living in a bad situation. But our life has changed with your holy gift, our God blesses you more & more.

My professional friends, I kindly request you to share my joy. I got big satisfaction with CPJ has done around my life.

My dear sister Nicole [Nicole Schilit, CPJ Journalist Assistance Associate] when I was in bad condition, I have seen you beside me, I am very thanking to you & God bless. Thanks to all the people who have helped me. I wish [the best] for all my professional friends. Shalom.

In our own words: CPJ op-eds and interviews

A Radio Journalist Who Put His Life On The Line – Interview with CPJ’s East Africa correspondent, Tom Rhodes, for NPR on World Radio Day.

Events: Where we were and where we will be

February 4, 2015 – The News We Could Lose: New Threats to Journalism and Press Freedom, Washington, D.C.