Prominent support for #RightToReport in the Digital Age 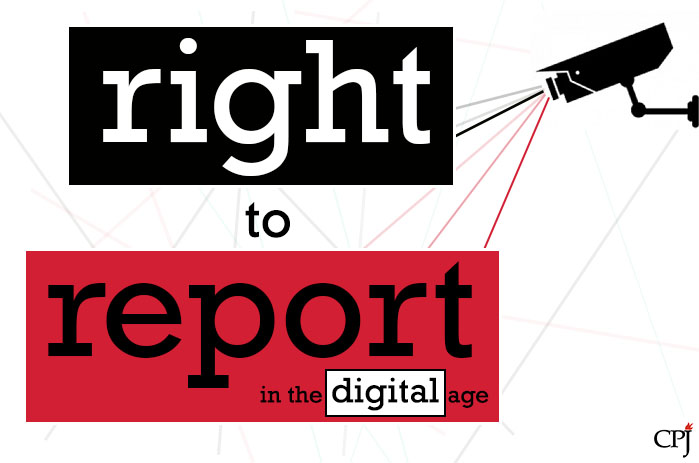 More than 2,800 people including prominent journalists Christiane Amanpour, Glenn Greenwald, and Alan Rusbridger have already signed on to CPJ’s new campaign Right to Report in the Digital Age.

CPJ launched the campaign this month along with more than 60 supporting partners including The Associated Press, Getty Images, Bloomberg News, The Huffington Post, First Look Media, Slate, Global Voices Advocacy, and the Electronic Frontier Foundation, in response to revelations in the past year about surveillance, intimidation, and exploitation of the press. These revelations have raised unsettling questions about whether the U.S. and other Western democracies are undermining the ability of journalists to report in the digital age, and have given ammunition to repressive governments seeking to tighten restrictions on the media and Internet. What happens in the U.S. has a tremendous impact on global standards, which is why CPJ has organized a petition calling on the U.S. government to:

CPJ Executive Director Joel Simon wrote a blog about the importance of this campaign for U.S. and international journalists alike, and CPJ sent a letter to President Obama about the concerns, and to follow up on CPJ’s previous recommendations sent to him after last year’s report, The Obama Administration and the Press.

The campaign is gaining strength, but we need your help to spread the message. Sign the petition and share your support for it on social networks using the hashtag #RightToReport.

The 2014 awardees are Aung Zaw, founder and editor-in-chief of Burma’s The Irrawaddy, which was branded an “enemy of the state”; Siamak Ghaderi, the Iranian freelance journalist and former editor and reporter for the state news agency IRNA, who was released from prison in July after spending four years behind bars; Mikhail Zygar, editor-in-chief for the Russian independent TV channel Dozhd; and Ferial Haffajee, editor-in-chief of City Press in South Africa, who has been threatened after publishing critical stories.

CPJ will present Jorge Ramos, co-anchor on Univision News since 1986, with the Burton Benjamin Memorial Award for lifetime achievement in the cause of press freedom. He also hosts “Al Punto” (To the Point), the Univision Network’s Sunday public affairs program. He recently started hosting a program in English on the TV network Fusion.

CPJ board member Christiane Amanpour, who is Chief International Correspondent for CNN, will host the event, and Alberto Ibarguen, President of the Knight Foundation, will be the dinner chairman.

Journalist murders on the rise in Guatemala and Honduras

According to the CPJ report Who is killing Central America’s journalists?, released this month, Honduras and Guatemala have experienced an alarming rise in the number of murders of, and attacks against, journalists. Those responsible enjoy near-complete impunity, the report, authored by Americas Research Associate Sara Rafsky, found. The report follows a mission Rafsky undertook to both countries in May.

Americas Program Coordinator Carlos Lauría presented the report’s findings at a regional Conference on Investigative Journalism, organized by the International Center for Journalists, in Honduras this month, where he met with local and regional journalists, and activists.

The report and its findings were covered by a number of outlets in Latin America including el Periodico, Yahoo! Mexico, and Univision. It can be accessed on the CPJ website in English and Spanish.

As this newsletter goes to press, a CPJ board delegation, in partnership with the International Press Institute, will be in Turkey seeking commitments from the government on key press freedom issues. These include the release of the remaining 10 journalists in jail; the reforming of multiple anti-press laws; and the allowing of free, unfettered speech online, including on social media.

The delegation will meet with local journalists, media experts, and government officials to discuss these issues. During his visit to New York as part of the U.N. General Assembly, Turkish President Recep Tayyip Erdogan agreed publically to meet the delegation.

CPJ welcomes the adoption of a resolution on the Safety of Journalists by the 27th session of the United Nations Human Rights Council, including concrete measures for fighting impunity. In it, the Human Rights Council calls on member states to consider creating investigative units or independent commissions, and adopting specific protocols for investigation, as well as establishing an early warning and rapid response mechanism to give journalists access to protective measures.

The resolution is, in part, the result of a tireless campaign led by CPJ for many years. To mark the International Day to End Impunity on November 2, CPJ will release a comprehensive report —The Road to Justice: Breaking the Cycle of Impunity in the Killing of Journalists — addressing some of the key concerns as well as providing recommendations on how member states, the U.N., and journalists can combat impunity.

On the ground, CPJ worked to improve the safety of journalists by co-hosting a training session for journalists, along with UNESCO and the Somali Independent Media Houses Association, for editors in Somalia this month. CPJ’s Journalist Security Guide is available in Arabic, Chinese, English, French, Russian, Somali, and Spanish.

CPJ Impunity Campaign Consultant Elisabeth Witchel wrote a blog this month about the new U.N. resolution on the safety of journalists.

While these releases are a positive sign, at least 11 journalists remain in prison in Egypt. CPJ is currently producing a short video on imprisoned journalists there, which is due to premier later this year.

Earlier this month Hassan Gessey, a Somali journalist, was detained without charge and held for 27 hours by the National Intelligence and Security Agency after criticizing a directive to restrict reporting on military operations.

After his release Gessey thanked CPJ for its work on his case. “After 27 hours in NISA jail I am free thanks to Allah and friends who were in solidarity with me including you and [the] CPJ team,” he wrote.

CPJ released a four-part undercover series this month on bloggers and journalists fighting repressive conditions and the threat of imprisonment and exile in Vietnam. The series is based on reporting undertaken on a mission to Vietnam earlier this year by CPJ Southeast Asia Correspondent Shawn Crispin, and concludes with recommendations for the Vietnamese government and international bodies.

An escalating campaign of suppression has targeted bloggers, making Vietnam the world’s fifth worst jailer of journalists. Laws, including a decree passed last year, have curbed Internet and social media freedoms in an attempt to bring online journalists further under the restrictions imposed on the country’s state-dominated mainstream media.

Last year CPJ honored Vietnamese blogger Nguyen Van Hai with its International Press Freedom Award. Van Hai remains in prison in Vietnam, though CPJ continues to work closely with his family and the U.S. government to secure his release.

CPJ signs on to letter urging release of Syrian journalists

CPJ, along with 78 other organizations, called for the release of three members of the Syrian Center for Media and Freedom of Expression who have been imprisoned by Syrian authorities since 2012. The center’s director, Mazen Darwish, and colleagues Hussein Ghrer and Hani al-Zitani are expected to receive a verdict on their contrived charges of “publicizing terrorist acts” on October 1.

The petition calling for their release was covered by The Associated Press and subsequently picked up by media outlets including The Washington Post, Yahoo, and ABC News.

Press freedom at the Olympic Games

CPJ released a report on the press freedom conditions in Russia before the Sochi Olympics this year, and a second report on impunity and censorship of the Brazilian press before the FIFA World Cup hosted by Brazil this summer. In the lead up to the 2008 Beijing Games CPJ issued a critical report on China and also met with the International Olympic Committee.

In attempts to contain Ebola, Liberia censors its press

Journalists investigating deaths of Russian soldiers are threatened and attacked

Is it time to end media blackouts?

Somalia: Journalist Released After Being Held for More Than Two Years

UPDATE: The section about freed journalist Hassan Gessey has been corrected to reflect that he lives in Somalia, not Kenya.