News from the Committee to Protect Journalists, February 2013 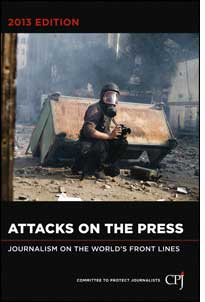 CPJ launches 2013 edition of Attacks on the Press

An unprecedented rise in the number of journalists killed and imprisoned in the past year coupled with restrictive legislation and state censorship is jeopardizing independent reporting in many countries, according to Attacks on the Press, CPJ’s yearly assessment of global press freedom released on February 14.

Launched at a live-streamed press conference at the U.N. Headquarters in New York, CPJ’s flagship publication was covered by media around the world, including The New York Times and the U.K.’s Guardian. The newest edition of Attacks also features CPJ’s new Risk List, which identifies the 10 places where the organization documented the most significant downward trends in 2012.

The publication features timely analyses by CPJ and global experts on media conditions, press freedom violations, and emerging threats in every corner of the world, along with regional data and a snapshot of conditions in close to 60 countries. The online edition of the book includes essays that focus on the weakening of the inter-American human rights and press freedom system; the looming media vacuum in Afghanistan; China’s relationship with the foreign press; mobile security; and the prospects of a global press freedom charter in times of increasing challenges.

The expanded print edition of the book includes essays on the Taliban by world-renowned author Ahmed Rashid; citizen journalists in Syria, by prominent freelance correspondent Oliver Holmes; jailed Ethiopian journalist Eskinder Nega, by multiple award-winner Charlayne Hunter-Gault; and the risks involved in covering the news, by CPJ Honorary Chairman Terry Anderson, who was once held hostage for almost seven years in Lebanon.

Regional sections of Attacks on the Press are available in Arabic, French, Russian, Spanish, and Portuguese. The print edition is published by Bloomberg Press, an imprint of Wiley, and is available for purchase here.

CPJ will host events around the world to promote the 2013 edition of Attacks on the Press. For more information on upcoming events, click here.

Pledge for justice in journalist murders in Somalia

As President Hassan Sheikh Mohamud seeks to legitimize the new government in Somalia, CPJ has pushed to ensure that press freedom remains on his agenda. CPJ was pleased to hear that the Somali government established a task force earlier this month to investigate journalist murders, but the organization renewed its call for the release of Abdiaziz Abdinuur, a Somali journalist jailed for interviewing an alleged rape victim.

On February 5, authorities established the much-anticipated Independent Task Force on Human Rights, whose mandate includes the investigation of past cases of journalist murders. Less than two weeks later, Prime Minister Abdi Farah Shirdon announced a $50,000 reward for information leading to the conviction of a journalist killer. “One journalist killed is one journalist too many,” Shirdon said on Twitter.

CPJ and other local and international press freedom groups have repeatedly called on Somali authorities to investigate journalist murders. In 2012, CPJ ranked Somalia second worst on its Impunity Index, which spotlights countries where journalists are murdered regularly and the killers go free.

International journalist Nadir Dendoune was released on bail on February 14 after being detained in Iraqi prison for almost a month. CPJ had joined other local and international press freedom groups in advocating widely for the journalist’s release and denouncing the vague Journalist Protection Law, under which he was charged.

Dendoune was arrested and accused of failing to register under the country’s Journalist Protection Law. The law’s ambiguities create unnecessary barriers to access information and falls short of international standards of freedom of expression. CPJ had also found similar issues with the Information Crimes Bill, another vague piece of Iraqi legislation that criminalized reporting on the Internet, which was effectively defeated in parliament in January.

Late last month, CPJ renewed its call for the elimination of the Journalist Protection Law and for all Iraqi journalists to be able to report freely and critically without fear of reprisal.

Since the October release of CPJ’s special report on Turkey, and the international attention it received, authorities have released several imprisoned journalists, including at least seven who were freed on bail this month from pretrial detention. CPJ has repeatedly called on authorities to end their pattern of doling out extended jail time for journalists awaiting trial, and included this recommendation in October’s special report.

CPJ found that more than three-quarters of the 61 imprisoned journalists documented in the report had not been convicted of a crime but were being held as they awaited resolution of their cases.

Since releasing the report, CPJ has conducted two missions to Turkey and advocated tirelessly to ensure the government will honor its international commitments to freedom of expression and stop the jailing of journalists.

CPJ Senior Program Coordinator for the Americas will be presenting findings from Attacks on the Press at a seminar in Sao Paulo on March 9. The event is hosted by ABRAJI.

CPJ’s Asia Program Coordinator Bob Dietz will be launching a special report on China in Hong Kong’s Foreign Correspondents Club in mid-March. The panel discussion will be moderated by CPJ board member David Schlesinger.

Faith in Somali judiciary hard to find as Abdiaziz jailed

Drawing lessons from Chinese attacks on US media

Assistant Advocacy Director Magnus Ag is a New York-based human rights advocate and journalist. Prior to joining CPJ in 2010, Ag worked as head of section in the Danish Ministry for Science, Technology, and Innovation. He holds a bachelor’s and a master’s degree in political science from the University of Copenhagen. He speaks English, Danish, and Norwegian. Contact him here or follow him on Twitter @AgMagnus.