In a country filled with paranoia and fear, citizens learn to be reporters. By Oliver Holmes 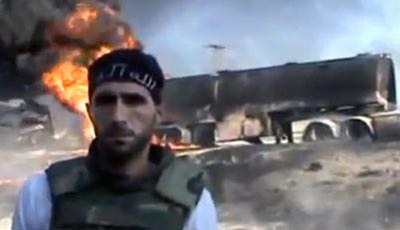 “Is he shooting at us?” I asked. The flaring red tracer bullets fired from a Syrian Army attack helicopter hit just in front of my feet, spitting up the dust of Aleppo’s streets. Sheltering behind an old car engine–the nearest thing I could find–I should have been able to answer the question for myself.

I had covered Syria’s uprising since it began, for the most part from outside the country, given the government restrictions on media access and the dangers on the ground. I had reported on the targeted killings of Syrian and foreign journalists. In Aleppo, I had seen the body of a boy lying in a street–he had been shot in the head by a government sniper as he walked home from market. I had spoken to Syrian journalists who had been beaten nearly to death by President Bashar al-Assad‘s security forces.

Yes, he was shooting at us.

Inspired by the Arab Spring’s dramatic sweep across the Middle East, Syrians took to the streets in March 2011 to protest four decades of oppressive rule by the Assad family. In the months that followed, peaceful demonstrators were shot dead or simply went missing, taken by Assad’s ubiquitous secret police. The defection of soldiers who refused to kill their own gave an armed wing to the uprising, backed further by farmers with hunting rifles. In response, the government used artillery and airstrikes to hit rebel groups positioned in civilian areas, like the deprived Aleppo suburb where I was attacked. A full-scale civil war was raging countrywide.

In Aleppo and Damascus, I reported from both sides of Syria’s conflict–in rebel-held territory where the risks were almost prohibitive, and in the government-run capital where restrictions made it impossible to get a rounded picture of the crisis. Journalists were not seen merely as observers in Syria. Assad’s media machine painted the uprising as a foreign conspiracy fought by terrorists, and declared that anyone critical of the regime was a terrorist and deserved death. Before entering Syria, journalists are advised to rip off the “PRESS” decal from their protective vests. The designation confers no safety.


I visited Aleppo, a sprawling metropolis of 2.5 million people, in August 2012, when roughly half the city was in rebel hands. The night before I ventured in, a Japanese video journalist, Mika Yamamoto, had been shot dead at close range by government militia when she turned the wrong corner. Her husband, who worked as her cameraman, said the assailants had recognized her as a journalist before firing.

CPJ research now ranks Syria as the most dangerous place in the world for journalists. At least 28 journalists were killed covering the conflict from January through December 2012. And it is not just government forces behind the killings; rebel forces have been blamed for an increasing number of attacks against journalists seen as pro-government.

I was staying in a rebel-held town an hour’s drive north of the city with a photographer who had a hunger for front-line images and a burly British security adviser who was worryingly conspicuous in his Oakley sunglasses. Entering Aleppo, we found a city being demolished from the top down. The multistory buildings provided some protection on the streets from incoming artillery fire, but floor by floor the buildings were being wiped out by shelling.

Despite its status as a war zone, Aleppo was still full of civilians. “We might be able to leave Aleppo, but what then? We have no money,” said a tobacconist who lived only a few hundred meters from where rebels and soldiers were fighting. I saw mothers, dressed in the conservative black veil, walking along streets with a line of young children behind them as black smoke rose and tank shells boomed in the distance. After months of battle, they appeared numb to the brutality of war.

During the Libyan conflict a year before, NATO forces had taken down Muammar Qaddafi’s air power, and journalists were able to advance to the battleground and then retreat to a safer distance. But in this war that Assad is waging against his own citizens, fighter jets and helicopters batter residential districts of towns and cities. Residents in Aleppo told of government spies who were giving away rebel positions and informing on foreign press in the city. Nowhere was safe.

Syria has a long history of repression. A year after President Assad took over from his father in 2000, he legalized private media, which had been banned since 1963. Yet the move was seen as largely superficial, with the state controlling media through intimidation and censorship, or through ownership by proxy. The Syrian journalists I know who were trained before the uprising were taught to write and broadcast propaganda for government media, not to criticize or expose.

But our guide in Aleppo was one of the many Syrians who, in the absence of a free press, had decided to become a citizen journalist and document the atrocities. A young man who was finishing a bachelor’s degree in international law when the uprising began, Abu Zaid started filming protests in the wider Aleppo province when the government was still in control.

“The regime prevented foreign journalists from coming in, and I needed to show the world that police were shooting dead peaceful protesters,” he told me one morning as we made our daily drive past farms along the flat roads that lead to Aleppo. After a year and a half of fighting, the rebels had pushed government forces out of Abu Zaid’s hometown. He had become a combat journalist during that time, spending his days filming the conflict in Aleppo. As we spoke, I noticed that he kept a pistol tucked in the back of his jeans.

“Why do you carry that?” I asked. “Just in case,” he said, offering me the gun for my time in Aleppo.

“If I hold a gun, then I can be considered a military target and not a journalist,” I said, with a tad too much self-righteousness. He burst out laughing: “You’re a target anyway.” Abu Zaid had been wounded three times before we met. A few weeks after I left, I heard a bullet had sliced through both his legs. Yet Abu Zaid laughed off his close calls with death. His life, like that of many Syrians, had been devastated by the war that had engulfed his country.

Before advancing to the front line, rebels would frequently tell me, they prayed to God asking for the gift of death. Once we were there, with bodies in the streets, tank shells hitting buildings, and the whiz of bullets cutting the air, I would berate myself for advancing with people who appeared to want to die. One afternoon, I spoke to a rebel fighter about my body armor. “Is it bulletproof?” he asked, dressed in camouflage and wearing an ammunition belt. “Let’s see if it is,” he said, pointing his rifle at my chest. I stood there in shock as his men laughed. A mortar landed across the street, and I felt shrapnel ping near my face. They barely flinched.

I didn’t want to die. I wanted my friend Abu Zaid to show an appreciation for his safety, too. Yet without his blasé attitude, how could he return to work in that city every day?


After I left, I called a friend, a Syrian journalist from Damascus. “Aleppo is really bad,” I said, sitting exhausted in my hotel room in Turkey. “Is that what it is like all over Syria now?” My friend, who like many Syrians does not want her identity known, goes by the name Leila. She had just returned to Damascus from her native Deir Al-Zor, an eastern desert city close to the border with Iraq. “My city is being destroyed, too,” she told me.

I had met her a year earlier, just as people were starting to protest across the country, first in rural areas and then in major towns and cities. Nobody could believe it was happening. Many states in the Middle East had vast security agencies, but Assad and his father before him had perfected the art of silencing dissent through fear.

Just out of university, Leila was smart and confident. She had started working for a pro-government news website but slowly became disillusioned and was quietly told to leave. We were introduced by mutual friends, and I asked her to work for me as a fixer. She helped me find doctors who had treated torture victims and protesters who had been shot. Leila used her network of friends around the country to get an idea of what was happening outside the capital.

When we met, she asked me to teach her how journalists worked abroad. She knew she had a talent for gathering information and said she wanted to help her country. But her friends were worried that she was being too vocal. She had been posting photographs on her Facebook wall of the men, women, and children who had been shot while protesting. And I worried about our professional relationship; she risked interrogation and jail for working with a foreign journalist.

With more than 20 intelligence agencies, Syria has had thousands of informants and secret police on the streets. Conspicuous in their leather jackets and beige trousers, standing idly on street corners, the security agents’ lack of discretion was intentional. Their presence was intended to incite fear among civilians, keenly aware that they were under constant surveillance.

I had entered Syria on a student visa that time, intent on pursuing a number of freelance assignments. The authorities had restricted foreign journalists, either by refusing entry or granting short trips under tight government supervision. Those who were found reporting illegally were arrested, sometimes beaten. Wary of the secret police, Leila and I would meet sources in rooms with the windows closed. Open reporting was impossible, and phones were tapped. I conducted nightly phone interviews with international radio and television broadcasters over Skype, using encryption software to try to conceal my identity.

“We now go live to Faris Amato, who cannot give his real name for security reasons,” the anchors would say before I talked about the situation in the capital. I’d selected the pseudonym to protect both myself, and the people I’d spoken to. I’d heard stories of Syrians being seized by the police after journalists were too open about speaking with them. I didn’t want that on my conscience. I wish the viewers could have seen me. I imagine they thought I was the typical foreign correspondent, standing in a dusty street with a notepad. The reality was far from that. For each interview, I would hide with my laptop under a thick bed blanket and lie there only in boxers, sweating copiously in the summer heat. The crowded Old City of Damascus offered ramshackle accommodations, and I worried that my neighbors would overhear conversations through the thin walls.

Leila is still working in Damascus. Like many journalists in government-held areas, she has to work in secret and cover her tracks. In contact with a handful of news organizations outside the country, Leila gives first-hand accounts of both government and rebel abuses, much needed as foreign journalists are few on the ground. The uprising and civil war, in a country filled with paranoia and fear, has turned Leila, as it did Abu Zaid, into a reporter. Learning the craft as they go, constantly working in peril, Leila and Abu Zaid and many others like them are getting the story out to the world.


Oliver Holmes is a correspondent for Reuters based in Lebanon. He previously worked as a freelancer for Time and The Wall Street Journal. He has worked across the Middle East including Syria, Yemen, and Libya.

Support CPJ: Purchase a copy of Attacks on the Press in 2012