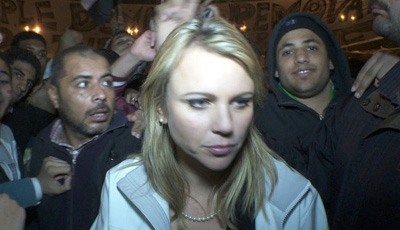 The much-publicized assault on Lara Logan put the danger of sexual violence for journalists into the spotlight for the first time. As a result, there is more open discussion between reporters and news managers, but still too few preventative steps. By Lauren Wolfe

When word went around that a mob had sexually assaulted CBS correspondent and CPJ board member Lara Logan in Cairo’s Tahrir Square in February 2011, the media jumped on the specifics: Why was the press release about her assault so precise? Why did it say the attack was “brutal” and “sexual”? What people didn’t know was that Logan was more than satisfied with CBS’ wording, and relieved that the information was finally public. Waiting a few days, she recently told CPJ, was painful. She was ready to speak immediately, to let the world know that her sexual assault was an attack not just on her body but also on the press, and that she would not only survive it but continue her work, unbroken.

“Your silence is like denial,” Logan said, adding that CBS had delayed the news release to allow her to physically recover a little and fly to the United States. She said that she never considered concealing what had happened from her viewers and that she could not have asked for more from her employer. “The single most important thing a company can do is stand behind a journalist,” she said. “If my boss had questioned what I was wearing, that would have broken me.”

Logan’s assault was not entirely unusual–CPJ uncovered a number of serious sexual assaults or rapes of journalists in its June report “The Silencing Crime”–but her disclosure and her employer’s supportive response were. Since that attack, awareness and sensitivity to sexual violence against journalists have increased in the news industry, with managers in particular expressing a desire to provide help to reporters and photographers on assignment, a CPJ follow-up survey has found. Still, for the most part, the profession lacks training programs that address the risks in a meaningful way.

Of more than 50 local and international journalists CPJ interviewed for “The Silencing Crime,” more than a dozen said they had experienced rape or other violent sexual assault, such as digital penetration or sodomy with an object. The majority of international correspondents reported having been repeatedly groped while working. But most of the journalists told CPJ that they had chosen not to tell their editors or go public about the sexual assaults, and of the few who did speak up, all but one said they had been met with censure, such as being pulled from an assignment or being told to remain quiet.

“I think it’s difficult for us to talk about this stuff because we don’t want to look like we’re weak, or whiners,” ProPublica reporter Kim Barker told CPJ in May. “The tendency of bosses is to want someone who knows what to do and doesn’t need hand-holding.”


Logan told CPJ that she had experienced sexual violence in the course of her reporting before–in one instance, a man had violently grabbed her breasts in Afghanistan–but the extreme nature of the 2011 attack led her to speak out.

With the lack of communication between journalists who don’t disclose sexual assaults and newsroom leaders who do not ask directly about a delicate or taboo subject, both sides have been in the dark about what to do next. But since Logan spoke out, and since New York Times photographer Lynsey Addario went public about her own sexual assault in Libya in March, some journalists, particularly editors who directly manage reporters and photographers, say they are interested in opening up the conversation or trying new approaches.

Jamie Wellford, Newsweek‘s photo editor, works with at least a dozen journalists around the world who are often on dangerous assignments. He said he believed that “most people would be pretty forward about telling me” if they had been sexually assaulted. After a lengthy conversation with CPJ, Wellford said he realized that he had never asked his photographers directly whether they had ever been sexually assaulted but that he was ready to do so now because there would be great value in having the information.

“It’s extremely important when you put people in a world of chaos and disorder that they speak about their experience,” he said. “It’s important to know so you can orient yourself how to put your people in the field. It’s so chaotic out there.”

MaryAnne Golon, a photo editor at Time magazine for 24 years until she left as director of photography in 2008, told CPJ that, having been close to many of her photographers over the years, she understands why journalists keep sexual assault a secret in their professional lives.

“I’m like their den mother,” said Golon. “I’m the one who sets up the sat phone. I had a firsthand notion of what they had to go through in the field.” Female journalists have told Golon about several “horrific experiences” in places such as Kuwait and Israel, she said. She recalled urging one journalist who was particularly traumatized after being groped to tell her editors what had happened. “I said, ‘This needs to get publicized.’ She said, ‘It won’t be by me.’ People are afraid of what it does to their own reputation rather than seeing the bigger picture.”

Golon, like Wellford, said there should be more open discussion of sexual assault. “What could happen, and what should happen, is particularly wealthy, big media organizations should be required to give these people training,” Golon said. “It should include that kind of sexual assault training. They should understand that this is a real possibility. There are steps that need to be taken when they come back. News outlets don’t even want to talk about [post-traumatic stress disorder], much less sexual assault.”

Prashant Rao, Baghdad deputy bureau chief for Agence France-Presse, told CPJ that he felt unsure of what he should do if one of his journalists was sexually assaulted. “Particular training on this would of course be useful, because, I must confess, I have little to no idea how I would handle such instances or advise colleagues on how to avoid/prevent them,” Rao wrote in an email.

Since May, when NBC’s vice president for worldwide news-gathering, David Verdi, told CPJ that the network would implement training on how to prevent and deal with sexual assault, the network has created and run a pilot course in conjunction with a consulting social worker who works with the military on post-traumatic stress.

“We felt there was a hole in that training, and we needed to fill that hole,” said Tracey Leaf, director of human resources for NBC Universal and NBC News, who described the process of creating a course as “very challenging” because there is no model from which to draw. “Right now I feel like I’m shooting arrows into the dark, to be honest,” Leaf said. It’s not like creating a training session on finance for your staff, she said. “We didn’t have a buy-off-the-shelf for this one.” NBC’s training includes safety tips and a discussion on how to identify post-traumatic stress disorder, Leaf said, as well as medical advice and tools. Rape kits that include the morning-after pill and a pricey HIV blocker will be prescribed to any journalist who requests them.

As for the fear that disclosure of sexual assault will result in being pulled off a story, Leaf said that at NBC’s pilot training, Verdi told the journalists: “Your assignment would never be compromised because of this. We want to help you, but we would never stop you from going into the field again because of it.”

But training alone would not have prevented what happened to Logan, said Jeff Fager, chairman of CBS News and executive producer of Logan’s program, “60 Minutes.” He likened her attack to being hit by a tsunami, saying that she was “lucky to be alive.” Though Logan and her crew were accompanied by a security specialist on the night of the attack–the crew had been roughed up a week earlier–the situation demanded greater support, Fager said. “We will never, ever, send a reporter into a situation like that again without significant security. And if we do not think we can provide enough security to feel safe? Then we will not cover the story.”

Lauren Wolfe is the director of Women Under Siege, a project on sexualized violence and conflict at the Women’s Media Center. While CPJ’s senior editor, she wrote the CPJ report, “The Silencing Crime: Sexual Violence and Journalists.” Previously, she was a researcher on two New York Times books on the 9/11 attacks.

Editor’s note: The original text of this piece was corrected to reflect that Prashant Rao is deputy Baghdad bureau chief, not bureau chief, for AFP.