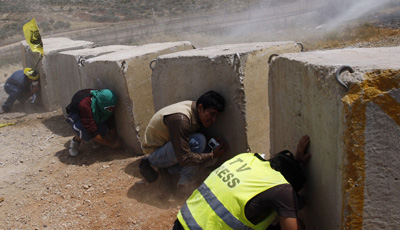 The danger of covering violent street protests has become a significant risk for journalists, alongside combat and targeted killings. Sexual assault, organized crime, and digital vulnerability are also hazards. The security industry is struggling to keep up. By Frank Smyth

Less than 20 years ago, the field of journalist security did not exist. “There was no security, no body armor, no training,” said Heather Allan, head of news-gathering for Al-Jazeera English and a former NBC News bureau chief.

In the 1990s, journalists’ deaths in the Balkans and Africa underscored “the need for a systematic approach to journalists’ physical security,” said Bruce Shapiro, executive director of the Columbia University-based Dart Center for Journalism & Trauma. The shock of the September 11 attacks and the wars in Afghanistan and Iraq made the journalist security field, at least for a time, a growth industry.

Today, the need for safety preparation has never seemed greater. Traditional threats to journalists persist at the same time that new dangers are either emerging or becoming apparent. Sexual assault, civil unrest, organized crime, digital security, and trauma are all recognized challenges to press freedom and safety, and leading news organizations are either modifying the military-oriented training courses, or developing their own security practices and curriculum. Still, money for security training is limited, and employers struggle to adapt their preparation to the myriad dangers. “We’ve quickly had to change our view of security,” said David Verdi, vice president of worldwide news-gathering for NBC News.

“We need a more nuanced approach,” said Judith Matloff, a veteran foreign correspondent and independent journalist security trainer who recently became director of the North American branch of the London-based nonprofit International News Safety Institute. “What is the best training for a situation? We need to do assessments of needs, as opposed to taking the approach that there is one solution for all.”


For more than a decade, many journalists took HEFAT, or Hostile Environments and Emergency First Aid Training, courses taught largely by British Royal Marines and other elite U.K. forces. Yet the most dangerous situation for journalists historically has not been combat coverage, but local reporting on sensitive topics such as crime, politics, and corruption. Since 1992, nearly three out of four journalists killed worldwide were murdered, mostly within their own nations, according to CPJ research. Another one in five was killed in combat or related situations, with the balance killed while covering street demonstrations or other violent, nonmilitary assignments.

Those proportions have changed significantly over the past two years, during which growing numbers of journalists have been killed covering violent street protests. By 2011, about 40 percent of media fatalities came during coverage of street demonstrations, many during the series of popular uprisings that swept the Arab world. And that shift in the dangers facing journalists has raised a new set of challenges for the profession.

The international community spends about $250 million a year on media development around the world, said Rodney Pinder, executive director of the International News Safety Institute and a former Reuters Television News executive. “They are training them to be professional journalists, and risk their lives,” Pinder said. “But they don’t train them how to protect themselves.”

Al-Jazeera correspondents and crews have been on the front lines of breaking news in nations such as Tunisia, while citizen journalists have been feeding footage and other news to the Doha-based network from nations such as Syria. “We’re worried about injury, how to get people out,” said Al-Jazeera news chief Allan. Kidnapping is another major concern. Every one of her foreign correspondents must compile regular risk assessments. The preparation requirements are even more stringent for Al-Jazeera journalists covering Mexico, a nation plagued by pervasive violence. “We have to see [the assessment] before they go out the door. Where are you going? Who are you meeting? How are you traveling there? Where are you sleeping at night?” she said. “People disappear there. Journalists are soft targets.”

Few attacks more strongly underscore the need for a new approach than the sexual assault of CBS News correspondent Lara Logan in Egypt’s Tahrir Square in February 2011. That case “drove the point home–that we must prepare our journalists not only for the battlefield but for all of the various new threats they face when covering the news,” said Larry Rubenstein, a veteran photojournalist who recently became Thomson Reuters’ general editorial manager for safety and logistics.

Indeed, Time magazine’s veteran foreign correspondent Vivienne Walt recently told the Canadian Broadcasting Corporation about her experience taking a HEFAT training course. “We were taught all sorts of things, from dressing wounds to recognizing different kinds of artillery, to what to do in a kidnap situation,” she said. “What was really striking was there was never any discussion about the particular problems pertaining to women.”

Organized crime groups, corrupt government officials, and terrorist organizations pose another kind of threat. “There is a difference between preparing war correspondents and training local journalists covering urban violence or organized crime,” said Rosental Alves, former managing editor of Jornal do Brasil and director of the Knight Center for the Americas at the University of Texas at Austin.

Journalists are regularly targeted for murder in nations such as Iraq, Mexico, the Philippines, Russia, Pakistan, and Somalia. Worldwide, the murderers get away with it in nearly nine out of 10 cases. The victims are overwhelmingly local journalists, cut down within their own communities. “Local journalists in emerging democracies living amidst civil conflict go home to their families who are also at risk,” said the Dart Center’s Shapiro. “Press freedom advocates need to be looking at ways to do more for local journalists.”

In Peru, the nonprofit news outlet IDL-Reporteros is developing its own security curriculum. Journalists take classes twice a week for eight weeks to learn Krav Maga, the self-defense system designed for close-quarter fighting adopted by the Israeli military. “This is obligatory,” said Gustavo Gorriti, editor of IDL-Reporteros and one of Latin America’s most respected investigative journalists. (Gorriti himself was abducted for two days in 1992 by Peruvian intelligence agents.) Gorriti said journalists are also trained how to spot a tail.

Another nonprofit, investigative journalism group, the Balkans-based Organized Crime and Corruption Reporting Project, has its own security training practices. “We believe the most dangerous indicator is that someone is following your reporter,” said Advising Editor Drew Sullivan. The group’s security protocols include surveillance detection and ways to approach and interview potentially violent groups and figures. “You have to do some counter-surveillance measures. Ours are not very sophisticated, but you have to start somewhere.”

A related threat is electronic interception. Government agencies have spied on journalists in nations from China to Colombia and Iran to Eritrea. In these countries and others, foreign correspondents, local journalists, and bloggers alike face the prospect of having their email, Facebook, and Twitter accounts monitored, their communications with sources, editors, and others intercepted, the data on their hard or flash drives stolen or copied, and their movements tracked, perhaps through cell phones or other devices. Criminal syndicates often possess the same capabilities. The lifting of such information rarely leaves a trace.


There is still great need for training in combat awareness and emergency first aid. Veteran photojournalists Chris Hondros and Tim Hetherington were killed in an attack in April in Misurata, Libya. Hetherington’s colleagues say he bled to death from an open wound to the femoral artery, consistent with a video of his body on a hospital gurney showing a blood-soaked wound to the right inner thigh.

Several colleagues told CPJ that they wonder whether Hetherington could have been saved. A trained responder could conceivably reach into an open femoral wound to apply pressure above the artery break to stop the bleeding. But this would be difficult under the best of circumstances, let alone in the back of a speeding pickup truck carrying three wounded journalists. A tourniquet would be another option, at the likely cost of losing the leg. But few journalists carry tourniquets and even fewer are trained how to use them.

The 2011 meltdown and radiation leak from a nuclear power plant in Fukushima, Japan, raised another set of contingencies that experts have barely addressed. Leading firms such as the U.K.-based Centurion Risk Assessment Services have provided training on biological and chemical warfare protection, but not on radiological disasters. The leading nonprofit International News Safety Institute lists providers of chemical, biological, radiological, and nuclear protection equipment.

One area in which many international news organizations have provided better support for journalists in recent years is coping with stress and trauma. Years ago, said Al-Jazeera’s Allan, “I think every journalist was supposed to suck it up.” Allan, a journalist of 30 years, said attitudes toward trauma are different today. “There are signs, and you can help people,” she said.

“We seek out leaders in the field of trauma,” said Santiago Lyon, a veteran photojournalist and photography director at The Associated Press. NBC news executive Verdi said he now brings in female and male experts from both the counseling and law enforcement fields who are experienced in addressing trauma as well as rape as part of NBC’s security training.

“Security in all its forms is simply a part of the core function of companies that are putting journalists in the field,” Verdi said. “It’s no longer discretionary. It’s not an adjunct or ancillary function. It’s a core function of being a journalist. It has to be considered up front on how to cover different regions of the world.”