Back in 2004, Iraqi gunmen loyal to the radical Shiite cleric Muqtada al-Sadr abducted U.S. freelance photographer Paul Taggert because, as they later told The Associated Press, they thought he was a spy. Now, a new poster from the U.S. Transportation Security Administration reinforces dangerous misconceptions by depicting a photographer as a terrorist. 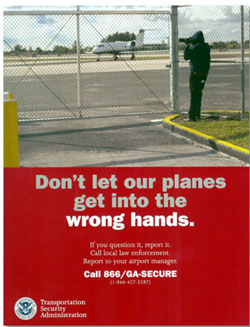 “Don’t let our planes get into the wrong hands,” reads the poster’s caption beneath an image of a man holding a camera with a telescopic lens pointed through the chain-link fence of an airport. The poster comes a year after U.S. Homeland Security Secretary Janet Napolitano went on Fox News and urged viewers to be suspicious “if they see, for example, somebody continually taking photographs of a piece of critical infrastructure that doesn’t seem to make any sense.”

The National Press Photographers Association sent a letter on Monday to Napolitano, asking her to order U.S. security authorities to remove the poster from display. “It is my understanding that airport administrators have been directed to post and prominently display this material around airports ‘one poster per entrance,'” stated NPPA General Counsel Mickey H. Osterreicher, who signed the letter. “I would have hoped that DHS and TSA would have been more sensitive to free speech concerns after your statement last year on Fox News regarding photography.”

Worldwide, photographers are regularly detained and harassed for doing their job. And that’s true in the United States as well. Lance Rosenfeld was on assignment this year for ProPublica and the PBS program “Frontline,” taking photographs related to the Gulf oil spill, when he fell under suspicion. Rosenfeld was detained in July near BP’s refinery in Texas City, Texas, by police and released only after authorities reviewed his images and collected his personal identification information, which they then shared with BP, the company whose off-shore drilling resulted in the massive Gulf of Mexico oil spill.

“In any free country, the balance between actual vigilance and over-zealous enforcement is delicate,” the photographers association wrote last year to Napolitano. “It is one thing for DHS to act when there is probable cause; it is quite another to abuse that discretion in order to create a climate that chills free speech under the pretext of safety and security. It is our position that the material targeted at the general aviation community does just that.”