Though it has been a dark year for Rwanda’s press, it has also been a year of resistance and turning to a new sort of reporting–from exile.

Ever since Rwandan authorities began cracking down on the nation’s independent press before the presidential elections in August, the space for critical reporting has been dissipating.

“The criminal cases against us [are] so heavy–up to 25 years in prison, plus I am under intense surveillance, more than ever,” Deputy Editor Didas Gasana told me while still in Kigali. “As things appear now, the country has become practically impossible for any critic or any opposition.” Soon after Gasana explained his situation to me, he fled the country. Umuseso was no more.

By June, life had become too difficult for the main players behind Umuseso. Chief Editor Charles Kabonero and Web Editor Richard Kayigamba found themselves in exile along with Gasana. (I am not disclosing their current location, since this information could put them at risk.) 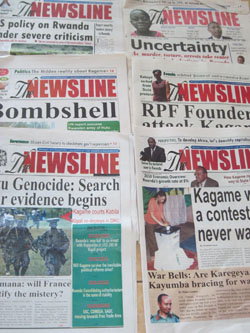 The bus carrying the copies of The Newsline was stopped at the border and the papers were confiscated, Kabonero told me.  Government security agents detained the conductor for five days in an attempt to find out who was behind the publication. Fortunately for the Newsline team, the conductor forgot the names of their newspaper distributor contacts in Kigali. Still, Kabonero said, “we felt so bad about getting this innocent fellow in trouble.”

Unable to ship the papers into the country directly, the team started sending electronic copies and smuggled in a few hard copies.

“We didn’t plan on it but people just started printing Newsline from the emailed versions we sent and threw copies onto the road,” Kabonero said. “I was so happy, I started encouraging people to do it.”

Despite the clandestine printed versions, the paper’s circulation in Rwanda remains very weak. While The Newsline sells around 1,700 copies in Uganda per week, only 300 reach Rwanda.

The Newsline‘s target audience is the Rwandan diaspora. It is printed in English, unlike the editors’ former weekly, Umuseso, which was printed in the local Kinyarwandan language.

The online edition of The Newsline attracts more readers than the print edition, Kayigamba said. Still, The Newsline cannot be considered a replacement for the former feisty weekly. The new publication has a more national, analytical focus, rather than the regional, news-oriented focus found in Umuseso, Kabonero said.

“Newsline has very few investigative stories, unlike Umuseso,” Kabonero admitted. “Umuseso had so much penetration, so many stringers–we are missing the rural stories that made the much-needed former paper what it was.”

The new publication still maintains its critical stance with headlines such as “Kagame wins a contest that never was,” an article that claimed the August presidential elections were manipulated to ensure President Paul Kagame’s landslide victory. But the Newsline editors refute the claim they are an opposition paper. “We still criticize the opposition,” Kabonero said. “But we are the only ones that provide coverage for the opposition politicians, since 60 percent of the Rwandan media is state-controlled.”

Obtaining information is a challenge for the exiled editors. Journalists in Kigali are easily bribed or intimidated by the state, Kabonero said, making factual confirmation difficult. An even greater concern is ensuring the security of their reporters and sources.

“That’s our main anxiety these days,” Gasana told me. “Whatever they do to us does not worry us.” The exiled editors still get threatening text messages from anonymous senders and are aware of at least three instances when Rwandan security agents followed them, Gasana said. “They know our movements. The Rwandan ambassador has criticized [us] on the air over here, but you get used to it,” he added.

Most Newsline contributors opt to keep their names out of the newspaper’s bylines to protect themselves. “None of our journalists know each other,” Kabonero said. “That way, if one is interrogated by security, he or she will not reveal the other reporters working for Newsline.”

While clearly pleased with their new product, the editorial team admits that The Newsline does not fill the information vacuum left by Umuseso and another defunct leading Kinyarwandan weekly, Umuvugizi. Rwanda’s Media High Council suspended Umuvugizi at the same time as Umuseso, leading Editor Jean-Bosco Gasasira to flee Rwanda in May after reporting legal and physical intimidation similar to that faced by the Umuseso journalists. Gasasira, now in Sweden, told me that 70 percent of Rwandans speak only Kinyarwandan.

“Most Rwandans do not speak English or French and only three percent have Internet access. So without these tabloid newspapers [Umuseso and Umuvugizi], the public will have no independent news,” Gasasira said. Umuvugizi now publishes online and receives an average of 5,000 visitors per day, according to Gasasira. The site is still blocked in Rwanda.

Another private weekly long harassed by the government, Umurabyo, quickly rose to prominence in April, although it was not considered as professional as the suspended papers, Umuseso and Umuvugizi, local journalists told CPJ.  Umurabyo stopped publishing in July after police arrested its editors on charges of incitement, genocide denial and contempt for the head of state.

This month, the Media High Council called Editor Nelson Gatsimbazi of Umusingi, a private paper that publishes irregularly, expressing concern over a series of recently published articles. Gatsimbazi told CPJ he fears the meeting with the Council will eventually lead to Umusingi‘s suspension.

As the Rwandan government cracks down on the last vestiges of the media’s independent press, we may expect the ranks of Rwanda’s exiled media practitioners to grow. Few expect they will be able to return any time soon. The Media High Council recently lifted the six-month suspension on Umuseso and Umuvugizi. But this hardly allows them the opportunity to return, Gasana told me.

Still facing criminal charges, Umuseso will not be able to register with the Media High Council as required by the media law to publish in Rwanda. “The Council still wants to ban us permanently,” Gasana adds, “and that will always hang over our heads.”