On July 26, the following headline appeared in Mexico’s daily Milenio newspaper: “Canada: Will assassinated at point-blank range.” Soon, similar headlines followed. The stories focused on a recent report by three Canadian investigators that sustains conclusions made by the Mexican authorities in the case of Bradley Roland Will, left, a U.S. video-journalist and activist killed in October 2006 in the southern Mexican state of Oaxaca. The government-commissioned report has sparked controversy for echoing the findings of Mexican authorities, whose investigation has been heavily questioned by local and international human rights groups and the Will family for being politicized and riddled with irregularities.

Will, 36, was shot as he filmed a violent clash in the outskirts of the Oaxacan capital between antigovernment protesters and supporters of Ulises Ruiz, the Oaxacan governor who remains in office. Ruiz’s power was strongly tested at the time as the protesters, many of whom were led by the Popular Assembly of the People of Oaxaca, or APPO, carried out a months-long protest that virtually shut down the capital city, Oaxaca.

Immediately after Will’s murder, photographs and video, including Will’s own video, poured in from the crime scene. The documentation provided compelling evidence that pro-government gunmen seen shooting at the protesters were responsible for killing Will, who was standing alongside the protesters. The documentation also squared with eyewitness testimony, including statements from other journalists at the crime scene, along with forensic evidence, including autopsy findings that the fatal bullets originated from a long range and at a distance that matched where the pro-government men had positioned themselves during the clash. 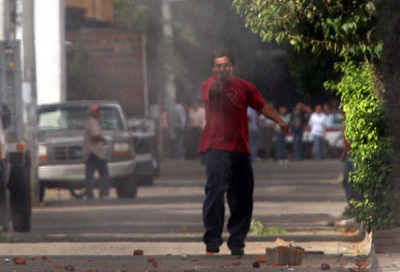 Despite this evidence, Mexican authorities argued that Will was shot at close range, essentially clearing pro-government gunmen of the crime and implicating the protesters themselves. In October 2008, a Mexican judge ruled that there was enough evidence to bring Juan Manuel Martínez, an impoverished local man who sympathized with APPO, to trial for Will’s murder. To date, Martínez remains in jail awaiting trial. His case file does not include a witness that places him at the murder scene. No motive is cited, and a murder weapon has yet to be produced linking Martínez to the crime.

The Mexican government’s failure to rigorously pursue other lines of inquiry, including those implicating the armed men shooting at the protesters, has generated criticism about the overall soundness of the investigation. The Will family and independent teams who have investigated the case, including the Boston-based nonprofit Physicians for Human Rights (PHR), have reiterated their disappointment in the government’s investigation and have questioned the imprisonment of Martinez. The new report, commissioned by Mexico’s Attorney General’s Office, appears intended to combat international criticism. Authorities have called the report independent but have not disclosed details about their arrangment with the three Canadian investigators.

The report agrees with the Mexican government’s findings in key ways, including the conclusion that Will was shot twice at close range. That theory contradicts findings by Mexico’s National Human Rights Commission and the PHR, which conclude that the two bullets that penetrated Will were fired at an estimated distance of between 130 to 165 feet. It also contradicts the autopsy report, which found that the wounds to Will’s body and damage to his clothing were consistent with long-range shots.

The new report also discards the theory by the PHR and other groups that damage found to one of the bullets extracted from Will’s body–one of the bullets was dented and marked with a red substance, possibly paint–was consistent with a ricochet and thus supported a long-range shot. The Canadian report contends that the bullet was damaged during the autopsy and “painted by someone to designate” it later on, as claimed by Mexico’s Attorney General’s office.

There are also factual errors in the Canadian report, including a false claim that Will “had done some independent journalistic work with guerrilla groups in Central America” and that, in Oaxaca, he lived at an APPO leader’s home. Kathy Will told the CPJ that Will never traveled to Central America and that he lived with three other non-Mexicans his entire time in Oaxaca. In a press release and addendum, the  Will family said that it believes that such erroneous background material reflects an attempt to present Brad Will in a prejudicial way.

There are also concerns that the Canadian investigators were influenced by Mexican authorities during their review. In their report, the three investigators–James Stephen, a forensic pathologist, and Phil Ziegler and Gary Buerk, two retired members of Royal Canadian Mounted Police–state that they are non-Spanish speakers and relied on translators from Mexico’s Attorney General’s Office. They also state that they were escorted by members of that office throughout their review. They also state that they read the reports by the National Human Rights Commission and the PHR. However, they did not make direct contact with those organizations. The Will family also was not contacted during the review.

In their conclusion, the Canadian investigators state their belief that the Mexican authorities carried out their investigation “in an unbiased manner with an open mind to all possible theories.”

The Will family said the Canadian report continues the Mexican government’s “pattern of biased, unscientific and politically motivated investigative efforts” and justifies “a deeply flawed investigation into the true circumstances of Brad’s death.”

Monica Campbell is a freelance reporter and CPJ consultant.