The shooting death last year of Radio Mindanao Network broadcaster Dennis Cuesta raised the realization among journalists here that the profession we know and love could cost us life and limb. 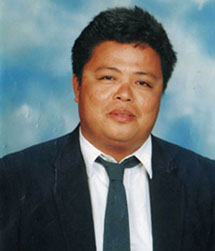 Cuesta, left, was the epitome of a brave and honorable provincial journalist. He was an intelligent but unassuming man, forthright and candid. And he was good company too. He used his radio program to make a difference in the name of community journalism and in the course of his reporting made powerful and corrupt people cringe, for which he ultimately paid for with his life.

Cuesta’s death has not made us cower in fear; to the contrary, it has given us a sense of purpose to soldier on and do what is honorable in our work. It has dawned on many of us here that there are people in our midst who don’t respect the rule of law and are willing to act ruthlessly when their interests are at stake.

It has also opened our eyes to the intricacies and handicaps of our justice system. We have now seen how powerful people can run circles around our courts. Previously, journalists here were often detached when reporting on judicial matters, but Cuesta’s murder has made clear that we are no longer disinterested spectators.

Before Cuesta’s killing, journalists in General Santos City were no stranger to harassment and even murder. Since 2002, three media practitioners here have fallen to gunmen’s bullets–two of them after exposing the illegal activities of people in government.

It is not uncommon for reporters in our city to receive death threats or warnings from “concerned people” to go slow in our reporting on certain issues. Officials and powerful individuals often lash out at reporters who mention their names on the airwaves or in newspaper reports, sometimes brandishing their weapons in fits of anger.

Justice in Cuesta’s murder case is the only way to stop these brazen acts and send notice to powerful people that they can no longer easily get away with killing journalists. Hopefully the supreme sacrifice Cuesta made will act as a catalyst for putting an end to the endless stream of harassment and killings of journalists across our country.