Somali journalists held an emotional press conference in Mogadishu today at the Sahafi Hotel after Sunday’s fatal shooting of the former director of Shabelle Media Network. (Sahafi means “journalist” in Arabic.) Roughly 15 journalists from different news outlets announced they were suspending their work because of security concerns. “We can no longer operate independently and impartially, and our lives are in danger because of the chaotic situation in our country,” said a statement signed by the journalists, who were mainly editors and producers at local radio and TV stations.

Since late 2006, dozens of Somali journalists have either been killed or forced into exile due to the ongoing fighting in the capital. CPJ helped former Shabelle Media Network journalist Baabul Nor leave Mogadishu in November 2007 after he survived gunshots, police raids, and detentions. Now in exile in Uganda, Nor told CPJ about his former friend and colleague, Shabelle Media Network Director Mukhtar Mohamed Hirabe, below, who was gunned down by armed men Sunday morning near the station in Mogadishu: 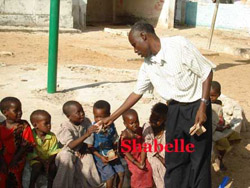 “It was with a great sense of loss that I heard of the death of my colleague Mukhtar Mohamed Hirabe. I send my greatest sympathy and deepest condolences to his family, friends, and colleagues, and my heart is truly saddened.

“Hirabe, former TV and radio director of Shabelle Media, had a dedicated audience in Mogadishu due to his balanced reports, programs, and stories. He was a kind, considerate man who geared his stories to the concerns of the poor and the needy. In 2006, he helped organize a Shabelle assistance program for orphans in Internally Displaced Person camps in Mogadishu. Well respected, he was also often the peacemaker when heated arguments arose within the station.

“My former colleague began his career with Shabelle as a correspondent reporting from Djibouti, and covered the reconciliation conference in 2000 that formed the former Somali government. In 2005, he came back to Somalia and started reporting on the conflict in the capital. He covered a range of programs including politics, business, and entertainment during his work at Shabelle.

“With such experience, Hirabe was nominated the director of Shabelle in late 2007 after his predecessor Bashir Nor Gedi was assassinated and the station’s former deputy chairman, Mohamed Amiin, fled to Sweden. Journalists were literally trapped inside the radio station at the time as the former government and insurgents battled next to the station in Bakara Market. Up to 10 Shabelle staffers left the station for security reasons and death threats; three of them were evacuated to Uganda with the help of CPJ.

“Hirabe’s death reportedly appears to have been an assassination by Islamic insurgents. I know that his passing will leave a void in the Somali media, in the hearts of all those who knew him.”

Radio Shabelle, one of leading independent media companies in the country, has been broadcasting since March 2003. The company launched a TV station earlier this year. Somalia is one of the most dangerous places for the media to work in. Five reporters have been killed this year–three from Shabelle–either as direct targets or caught in the crossfire of fighting between different groups.