There is an often-repeated phrase among journalists: No story is worth dying for, we say. But journalists are dying in every region of the world. In Iraq, in Somalia, in Russia, in Bolivia, in the Philippines, journalists died last year while reporting the news in their countries. 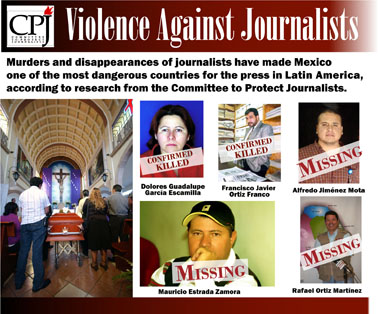 Those disturbing findings brought CPJ to Tijuana and San Diego this week. , CPJ’s Americas senior program coordinator, and board member Clarence Page presented Attacks on the Press to nearly 60 journalists in Tijuana on Tuesday, as Executive Director Joel Simon presented the report to the United Nations and other CPJ representatives discussed the report in Cairo and Madrid.

On Wednesday, Lauria and Page reviewed the findings during a session at the Institute of the Americas, a nonprofit organization on campus of the University of California, San Diego, headed by Jeffrey Davidow, former U.S. ambassador to Mexico and Venezuela. They told the audience of reporters, students, and professors about the self-censorship that is occurring among Mexican journalists who fear for their lives if they report on organized crime or the link between organized crime and government officials.

They said the threat to journalists has spread from dangerous border cities such as Nuevo Laredo–where the newsroom of the daily newspaper El Manana was the target of a February 2006 grenade attack–to once “safe” cities such as the industrial northern Mexico city of Monterrey.

Lauria explained that reporters in small cities and towns far from Mexico City are most often the targets of murders and disappearances. In those distant cities, serious criminal investigations are rarely pursued by the authorities. As a result, few of the crimes committed against journalists since 2000 have been solved.

As Lauria spoke, the tragic statistics on murdered and missing journalists flashed across a screen:

Brad Will, killed in Oaxaca in October 2006

Gamaliel Lopez Candosa, missing in Nuevo Leon since May 2007

Many more cases of murdered and missing Mexican journalists have been documented by CPJ since 2000, Lauria said.

CPJ is pressing Mexican President Felipe Calderon’s government to enact a law that would make it a federal crime to murder a journalist–something that would be considered in a broader context an attack on freedom of expression. Two bills are before the Mexican Congress now. As attacks against journalists continue, CPJ–and Mexico’s journalists–await the results.

S. Lynne Walker is the vice president of the