News from the Committee to protect Journalists 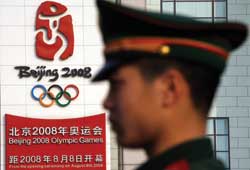 CPJ’s blog took off in August as Asia Program Coordinator Bob Dietz posted on the Olympics from Hong Kong. Bob covered issues from the censorship of various Web sites to the arrests of journalists covering protests. From our offices in New York, Asia consultant Kristin Jones blogged on the Chinese-language media and focused on the stories that grabbed the attention of reporters on the mainland.

The blog quickly became the second-most visited page on our site and helped sustain media interest in China ‘s failure to meet its press freedom commitments. CPJ was quoted in numerous stories as major news outlets such as The Associated Press and Reuters looked to Bob Dietz as the authoritative voice on press freedom issues during the Games.

CPJ continues to expand our blog content with updated information on press freedom issues and reactions to breaking news. We are constantly updating, adding regular news updates, video, and CPJ statements. Check back regularly at cpj.org/blog, or subscribe to the RSS feed to stay current with all our postings.

The U.S. military has been detaining Iraqi journalists at an increasing rate. Just last week, two were arrested–one from Reuters another from Baghdad TV. Only one has been released so far. Executive Director Joel Simon expressed worry about “the apparent uptick in journalist detentions” in a news release on the detentions.

In another case, Ali al-Mashhadani was freed on August 21. He was arrested on July 29 in Baghdad by the U.S. military while he was in the Green Zone trying to renew his press card. Al-Mashhadani, a freelance cameraman

who has worked for Reuters and the BBC, has been detained three times by U.S. forces in Iraq .

Then, two days later, on August 23, Ahmed Nouri Raziak was also freed. Raziak has worked for APTN and had been detained at his home in Tikrit on June 4. Later that month, a U.S. military review board ordered Raziak held for at least six more months for “imperative reasons of security.” No specific charges or evidence were disclosed.

CPJ has documented several cases of Iraqi journalists held by U.S. forces for weeks or months without charge or conviction. All were released without any charges being substantiated, including Associated Press photographer Bilal Hussein, who was freed after two years in April 2008.

Instability in Georgia a continued danger for journalists

While the hot war, which took the lives of three journalists in Georgia , has ended, journalists covering ongoing tensions in the region continue to face harassment and detentions.

CPJ has reported on the death of three journalists as well attacks on at least eight others, including a Polish news crew released on September 9.

Three journalists, two from Ethiopia and one from Syria , were safely resettled this summer with help from CPJ’s Journalist Assistance Program. All three had spent over a year’s time living in precarious conditions outside their countries after work-related persecution forced them to flee.

CPJ lobbied the UN refugee agency and foreign embassies to push for these journalists’ resettlement and provided them with much needed financial support.

Merid Estifanos, once editor-in-chief of Satanaw, had been living in hiding in Sudan for the past year before securing a visa to travel to France , where he is seeking asylum. Feleke Tibebu, former deputy editor of Hadar, fled to Kenya following his acquittal and release from prison, where he had served nearly 17 months on anti-state charges.

A Syrian journalist, who wishes to remain anonymous for the security of his family, was also resettled in the United States this summer after spending over a year in Lebanon , where a heavy Syrian security presence kept him fearful for his safety.

Tibebu was acquitted and released in April 2007, and now lives in Virginia with his family. Feleke speaks about CPJ’s role in his release on the CPJ Blog. “CPJ gave me hope and support,” he said. “I knew organizations like CPJ were fighting for our rights when they visited us. When the authorities heard that CPJ and others were coming, they built a new cell and they moved us there.”

Feleke is one of more than 340 journalists forced into in exile whose cases CPJ has documented since 2001.