The government’s promise not to censor the Internet has allowed bloggers more latitude than journalists working in other media. Now, with a leading blogger jailed, that freedom is in jeopardy.
KUALA LUMPUR, Malaysia
The jailing of Raja Petra Kamarudin, a self-described risk-taker who has led Malaysia’s lively blogging culture, has come to symbolize the government’s new assault on Internet expression. On September 12, police raided Raja Petra’s residence, seized documents, and arrested the popular blogger under the draconian Internal Security Act, which allows for detention without trial. 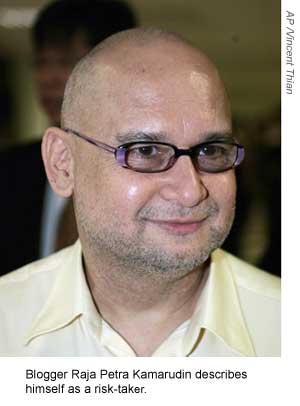 In the four years since he launched Malaysia Today, the 58-year-old Raja Petra has established a reputation for running news and commentary critical of the administration. This year, as the ruling party’s influence has slipped, the government has stepped up harassment of the blog’s founder. Raja Petra’s reporting on a politicized murder case led to several days of detention on sedition charges in May and, later, to three counts of criminal defamation. In August, government regulators ordered domestic Internet service providers to block Malaysia Today on grounds that the blog was publishing seditious material. The move also happened to coincide with Raja Petra’s plans to post real-time results of a special election eventually won by opposition politician Anwar Ibrahim.

Despite the government’s actions, Malaysia Today has managed to survive. Raja Petra got around the censorship order by publishing the blog on a mirror site and creating new Internet addresses in foreign countries. His wife, Marina Lee Abdullah, and colleagues have continued to publish since his imprisonment. And in a September 30 post written and smuggled out of prison, Raja Petra remained defiant as he described his conditions.

That attitude was on display when CPJ interviewed Raja Petra a month before his imprisonment. “I’ve been charged with everything from insulting Islam, the prime minister, the sultans–every known living thing,” he said, relaxing that day in a restaurant in the Bangsar neighborhood. “Islam makes it mandatory to oppose oppression. It’s your duty, and it’s what I’m doing.”

A former businessman turned political activist, Raja Petra started Malaysia Today in August 2004 in response to what he considered to be a chronic lack of critical coverage in the state-controlled mainstream media. The site runs commentary and news from three regular, pseudonymous writers. With a steady stream of hard-hitting reports, he claims a higher daily readership than most Malaysian newspapers.

Malaysia Today has been at the forefront of the country’s vibrant and proliferating blogosphere, which independent researchers, press freedom advocates, and journalists say has expanded the boundaries of Malaysian press freedom. News-driven blogs like Raja Petra’s have taken hard aim at the government and individual politicians, providing a sharp counterpoint to state-led television news and ruling party-influenced newspapers. “We take risks no one else takes,” Raja Petra told CPJ in August. 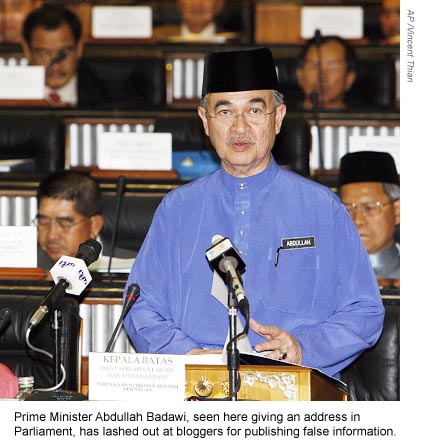 The Malaysian government has long held local newspapers and magazines in check through a renewable licensing system that has also led to arbitrary suspensions. National security laws such as the Internal Security Act, Sedition Act, and Official Secrets Act have instilled a culture of self-censorship at most news publications.

But a government pledge not to censor the Internet, first made in 1996, has allowed bloggers and online news sites to tackle tough issues the mainstream media habitually neglect. The no-censorship policy, developed by then-Prime Minister Mahathir Mohamad, was designed to lure foreign investment to the Multimedia Super Corridor project, a big ticket, state-led bid to incubate Malaysia’s own version of the Silicon Valley.

The country’s commitment to an open Internet appears to be in doubt now. With only a clutch of multinational companies in residence, the incubator project has failed to live up to commercial expectations. And as Malaysia’s blogosphere has grown in political significance, the ruling United Malays National Organization (UMNO) has seen its own position weakened. In March elections, UMNO lost its two-thirds majority in parliament and control over five of the national federation’s 13 states. Prime Minister Abdullah Badawi and others have lashed with greater frequency against bloggers, claiming they publish false and libelous material.

The government’s actions against Malaysia Today were the first instances in which the government directly broke its no-censorship pledge, but journalists and human rights lawyers told CPJ that troubling signs had been coming throughout the year. “The government seems to be intent on creating a climate of fear, although with dubious procedures,” says Jun-E Tan, a doctoral student at Singapore’s Nanyang Technological University who recently co-authored a book on Malaysian blogs and their impact on democratization.

Unconfirmed blog reports, for example, said that a hard-line UMNO faction working alongside the Science Ministry had explored closing YouTube and template blog sites such as WordPress and Blogspot in the run-up to the March election. Around the same time, reports posted on several blogs said that UMNO’s youth wing had compiled a list of 30 local bloggers it considered potential threats to social stability.

Information Minister Ahmad Shabery Cheek would not confirm or deny those reports. In e-mail comments made to CPJ before Raja Petra’s arrest, he said “the government encourages the growth of online journalism” and that Malaysia “was one of the freest environments on earth where blogs and bloggers are concerned, even compared with the United States, Britain, and Europe.”

“What we stress is accountability. … The government is, of course, concerned with anyone who is out to undermine the country’s peace and stability,” said Ahmad Shabery. “If the person who tries to incite racial discord happens to be a blogger, the government will act against him, not because he is a blogger, but because he is out to create trouble.”

That’s clearly how the government views the likes of Raja Petra. Last year, the blogger ran a 12-part series on corruption among police, particularly alleged links to organized crime syndicates. Before that, he ran a series of investigative reports on alleged nepotism involving Abdullah and son-in-law Khairy Jamaluddin, deputy chief of UMNO’s youth wing.

“I have deep throats both inside and outside government,” Raja Petra told CPJ before his imprisonment. Yet neither those sources nor his lineage to one of Malaysia’s main royal families has shielded him from government harassment. Since launching his blog, Raja Petra says he has been hauled in for police questioning more times than he can remember. He has also received anonymous death threats on his cell phone, although he said he doesn’t take the calls too seriously.

“I’m a risk-taker, not a troublemaker,” he said in August. “We see how far we can go with what the government considers a crime and see if we can get away with it.” Now, as Raja Petra sits in solitary confinement, the Malaysian government appears to have responded.

Shawn W. Crispin is a Bangkok-based journalist and consultant to CPJ’s Asia Program.