Befekadu Moreda was anxious as he sat with his pregnant wife, Tseday, and their two daughters in a terminal at Chicago’s O’Hare International Airport in April. His pockets were virtually empty, and his future was filled with uncertainty. Their connecting flight to Houston–their new home–had been cancelled.

In his native Ethiopia, Moreda was known as a tenacious and uncompromising editor. But at this moment, his 3-year-old daughter, Fennane, wanted a drink, and even that was beyond his means. “At that time, I remember, we don’t have money even to buy a soda. My little child asked me for water, water, water,” Moreda now recalls. “We are strangers here. We don’t have anyone.” 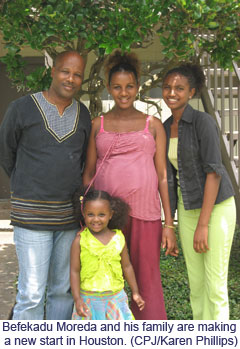 Moreda, who was granted resettlement status in the United States, finally made it to Texas with his family, concluding a journey that began in early 2006 when he fled across the Ethiopian border to Kenya under threat of imprisonment. Despite the extraordinary hardships that come with leaving one’s career and one’s homeland, Moreda, 43, considers himself a fortunate man.

According to CPJ research, Moreda is among 34 Ethiopian editors and reporters who have fled into exile since 2001, a period during which only Zimbabwe has produced more exiled journalists. Dozens of journalists have been in and out of .Ethiopian prisons within this timeframe, one that also saw the wholesale dismantling of Ethiopia’s independent press, including Moreda’s well-regarded newsweekly, Tomar. His grueling journey out of his native country and into a new life mirrors the experiences of many Ethiopian journalists forced to flee their homes

Moreda was one of a group of like-minded publishers and editors active in the establishment of Ethiopia’s free press in the early 1990s, following the rise of the Ethiopian People’s Revolutionary Democratic Front (EPRDF) led by Prime Minister Meles Zenawi.

Moreda remembers it as a hopeful time to be a journalist in Ethiopia, where new publications emerged out of a desire to support the country’s nascent democracy. “To build this democratic society, this society should have the right to speak freely,” he said in an interview with CPJ. “We started the newspapers and magazines to facilitate the forums for these people.” 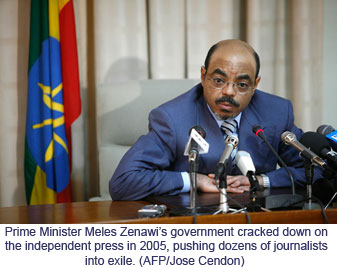 In 1993, Moreda helped launch a weekly called Tomar, which means “letter” or “message” in Amharic. Tomar had a reputation for exposing government corruption and human rights violations. As its editor, Moreda was known for his professional integrity and his courage in defending the right of journalists to do their jobs.

That same year, Moreda became a founding member of the Ethiopian Free Press Journalists Association. In a telephone interview with CPJ in June, Tamiru Geda, the association’s UK-based secretary, called him “one of the most dedicated and respected journalists I came across when I was in Ethiopia.” Moreda, he said, “doesn’t give up easily or surrender to external or internal challenges.”

Between 1993 and 2005, Moreda was detained nine times as the EPRDF’s commitment to press freedom waned in the face of increasingly critical coverage by private publications. The charges against him, which stemmed from articles he wrote or published in Tomar, included “incitement to violence,” “defaming the military,” and refusing to reveal sources–despite a 1992 press law that supposedly guarantees their confidentiality.

Moreda described Ethiopian prisons as cramped and dirty. “You cannot lie down even at night; you can sleep only on one side because of the space,” he said. “There is no sanitation system.” Imprisonment was then a routine occurrence for independent journalists and editors in Ethiopia, although bail money was usually enough to secure a release. Most important to Moreda was that Tomar remained on the newsstands, even during his detentions, the longest of which lasted six months.

However objectionable these conditions were, they got much worse for the press in 2005. In May of that year, contested parliamentary elections led to violent clashes between opposition groups and the ruling EPRDF party. At least 15 journalists were imprisoned on claims of antistate activity for articles that criticized the government’s handling of the civil unrest. Several others were detained on years-old charges and held without bail.

With three cases against him already in the court system, Moreda knew it was only a matter of time before his name would be called. To make matters worse, the government had pressured Tomar‘s printer to stop publishing the newspaper. In March 2006, Moreda fled his home, leaving behind his career and, for a time, his family. The next day, he was sentenced in absentia to 15 months in prison on charges stemming from an opinion piece published in Tomar five years earlier. 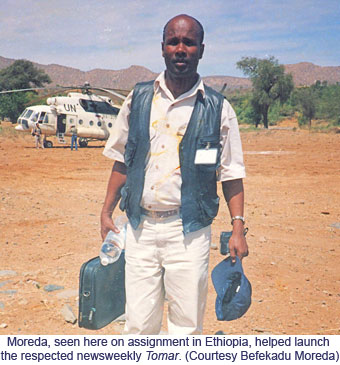 “If you cannot work in your country, if they ban your newspaper, your media institution, what do you do?” Moreda asked. “You have to move someplace else.”

Where he would ultimately end up, however, was still unclear. “It was a life of fear,” Moreda recalled. “It was hiding and doubt.”

Moreda hid at a cousin’s house until he could secure a car to drive him the 475 miles (765 kilometers) to Moyale, a city on the Ethiopian-Kenyan border. From Moyale, his driver helped him hire a broker to guide him and three other refugees across the border, traversing grazing land in Ethiopia and weaving through dense forest on the Kenyan side, keeping a lookout for Ethiopian security agents.

Not long after their arrival in Kenya, they were approached by a police car. Moreda’s broker negotiated their passage to Nairobi, a two-day journey. Moreda remembers the trip as bittersweet: “On the one side is the hope I will overcome this problem, so I have to be strong. On the other side is my family, which I left behind. That was a feeling of pain. “

New challenges awaited Moreda when he arrived in Nairobi, home to an estimated 30,000 refugees who pour into Kenya from neighboring countries. A friend and fellow Ethiopian journalist, Silessi Woledeyes Beyene, offered him a place to stay. Within a week, Woledeyes Beyene was contacted by representatives of the Ethiopian government and told to bring Moreda in for questioning. The two immediately changed lodgings and kept a low profile.

Elizabeth H. Campbell, a coordinator for Refugee Council USA, said the Kenyan government “continues to insist that all refugees must reside in camps and legally does not recognize refugees outside of camps.” She added that the refugees’ lack of legal status increased their vulnerability to arrest by what she termed a corrupt police force.

Refugees like Moreda can request official status from the United Nations High Commissioner for Refugees (UNHCR), which affords “a certain insulation from excessive police abuse,” according to Campbell, but is no safeguard from abduction or harassment by Ethiopian agents.

Meanwhile, Moreda’s wife was enduring police harassment at home. After the journalist went into hiding, Tseday Moreda received phone calls and visits from police demanding to know his whereabouts and, finally, forcing her to sign an official document stating that he had left the country. Tomar‘soffices were ransacked. Fearful of the police, shunned by her neighbors for being a so-called “enemy of the government,” and without the means to support her family, she made the decision to take her daughters over the border and join Moreda in Nairobi.

Inside the Moreda family’s new home–a weathered prefab apartment in southwest Houston–are reminders of a distant homeland. Leftovers from an Ethiopian breakfast of injera bread, grilled meat, and green kochkocha sauce sit on the kitchen table, and the smell of newly roasted coffee beans hangs in the air. Two worn copies of Tomar sit on the coffee table before a muted TV set.

Moreda, dressed in blue scrubs, says good-bye to his daughters and wife and steps into the hot May morning. He will ride the city bus for more than an hour to get to his maintenance job at a Houston hospital. The hours are long–he usually returns home after 1 a.m.–and the work is physically draining, but it pays the bills and, Moreda said, his first goal is to make a new life for his family.

Moreda’s experience in Houston is typical of that of most journalists forced into exile. Of the 209 cases of exiled journalists that CPJ has documented since 2001, less than one-third have found work in professions related to their field. Language barriers, varying professional standards, and job scarcity reduce their likelihood of making the transition into a foreign newsroom. In the end, the majority of exiled journalists must take low-level jobs in order to provide for themselves and their families.

“There are millions of people living in Ethiopia who think of America as a garden of heaven,” Moreda said. “But America is not like that; it is the land of effort.”

Since his departure from Ethiopia, all of the journalists detained during the 2005 crackdown have been released, but many have gone into hiding, fearing re-imprisonment. Fifteen of the more than 20 newspapers that flourished prior to the crackdown remain shuttered, and exiled Ethiopian journalists interviewed by CPJ said that self-censorship is widespread among the papers still operating.

The government, for its part, denies the very existence of a press crackdown. Zemedkun Tekle, a spokesman for the Ethiopian Ministry of Information, told CPJ that journalists are not imprisoned for doing their job. “I do not know these journalists you are talking about. I can only say that the rule of law is prevailing in Ethiopia.”

Asked whether he would return to Ethiopia, Moreda echoed sentiments expressed by his exiled colleagues abroad. “Really I don’t have an interest to live in [the] USA,” he said. “Even tomorrow, if this government allowed [a] free press, if they declared amnesty for people like me, I would go back to my home and I would serve my people.” But his return to Ethiopia, where conditions for journalists remain precarious, seems an unlikely prospect anytime soon.