When Marc Epstein and Jean- Paul Guilloteau, two French reporters writing an article for the newsweekly L’Express about Taliban activity along Pakistan’s border, were arrested for traveling to the area without government permission, they were released on bail two weeks later and allowed to return home.

But Khawar Mehdi Rizvi—the local journalist hired as their “fixer” to guide, translate, and arrange interviews— was detained for more than three months. For the first six weeks, during which Rizvi says he was tortured, police denied even holding him. He was later charged with sedition, conspiracy, and impersonation, which can carry a sentence of life in prison. Ironically, when police arrested the men in December 2003, Rizvi, as a Pakistani citizen, was the only one who wasn’t violating the country’s restrictive visa laws.

Rizvi is not the only local fixer to face serious consequences for his work with foreign reporters. At particular risk are local media workers assisting in covering the U.S.-led war in Iraq and terrorism in general. In Iraq, nine fixers, translators, and drivers have been killed in 2004, while at least a dozen others have been threatened, attacked, or injured. At least five Pakistani journalists have been detained, assaulted, or threatened in the last year because of their work for foreign journalists.

In a climate of heightened danger for the press, local fixers, though they may blend in more than Westerners, have become targets themselves because of their association with international media outlets. And as fixers’ work becomes both more substantial and more dangerous, news organizations face tougher questions in navigating this new terrain in international journalism.

Fixers have long worked with foreign correspondents, doing everything from booking hotel rooms to scheduling interviews with top officials. While the term is sometimes broadly applied to include drivers and travel guides, established fixers are generally local hires, many of whom are well-respected journalists in their own countries. They work on a shortterm basis providing expertise, translation, contacts, and research. 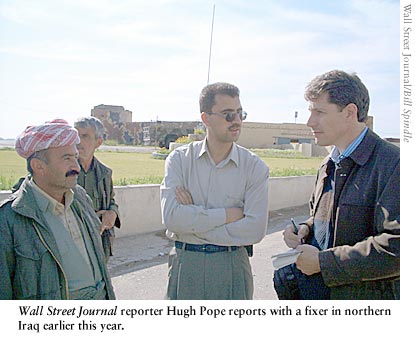 For some, the word itself is problematic. “Fixer is the wrong term,” says Andrew Maykuth, foreign correspondent- at-large for The Philadelphia Inquirer. “They are really journalists. … Their work demands the same ethical standards of reporting.” Though fixers traditionally worked behind the scenes, political conditions in today’s hot spots are pushing them to the front lines. Kathy Gannon, currently on leave from her post as Islamabad bureau chief for The Associated Press, says, “Fixers and stringers are used more and more to go into areas that, as a Westerner, it is difficult to penetrate, such as the tribal areas of Pakistan.”

In Iraq, where Western journalists are routinely targeted for attack, media outlets rely on local hires to report in dangerous areas. (See “Getting the Story,” Dangerous Assignments, Spring/Summer 2004.) Hannah Allam, Baghdad bureau chief for Knight Ridder, says that their fixers have taken on increasing responsibilities. “Their work has changed in the last year I’ve been here from making phone calls to going out and covering stories.”

“What we’re seeing now are fixers as surrogates,” says Orville Schell, dean of the Berkeley School of Journalism. In Iraq, “they are the Seeing Eye Dogs, or rangers, for the men and women who can’t safely go out and do the reporting themselves.”

According to Schell, it is not only the dangers posed to correspondents by anti-Western sentiment that have increased reliance on fixers. “The role of the fixer has grown with parachute journalism,” he says, and notes that since the end of the Cold War, media outlets and journalism schools have failed to cultivate regional expertise. “When I was in China, most correspondents there were Chinese studies graduates. To some extent, universities have bred a generation of journalists who need prosthetic devices to cover certain areas,” Schell argues.

Fixing has always been a risky business, even before the Iraq war and the struggle against terrorism. According to Juan Tamayo, a veteran foreign correspondent and now chief of correspondents at The Miami Herald, that has always been true. “Fixers are subject to local retaliation more than we are. And that’s the case almost anywhere,” he says. “We do our story; we leave. They stay.”

Two years ago, local Bangladeshi journalist Saleem Samad and human rights worker Priscilla Raj were detained for nearly two months and tortured in custody for their work as fixers for a U.K.-based Channel 4 documentary on politics and religion in Bangladesh. Acquitté Kisembe, a fixer for Agence France-Presse in the Democratic Republic of Congo, disappeared while on assignment in June 2003 in the city of Bunia. He remains missing and is presumed dead. And in April 2002, Guatemalan fixer David Herrerra was abducted while on his way to pick up former National Public Radio correspondent Gerry Hadden. Herrerra later escaped.

Today, Pakistani authorities and religious groups routinely harass fixers for their work with foreign correspondents. Elizabeth Rubin, a contributing writer for The New York Times who has worked with fixers in both Pakistan and during the Balkan conflicts, says that in Serbia, fixers were often called in to report to the Information Ministry, but they were not “chased down” as they are in Pakistan. Fixers there are also more vulnerable because they may not necessarily be viewed as legitimate journalists, due to the informal hiring process, which usually does not include a contract. According to Pakistani journalist Iqbal Khattak, before September 11, the term “fixer” was unknown in Pakistan and even now is viewed with suspicion by intelligence agents and police there.

Widespread Internet access is another reason that local fixers can run afoul of governments or religious groups more often, says one fixer with eight years’ experience in Pakistan and Afghanistan who asked not to be named. “Foreign correspondents think they are writing for a certain audience, and that they are not putting their fixers at risk. But now any warlord can get an article online, and they are frequently translated into the local language and circulated. If the story offends someone, the fixer will get a visit.”

Greater dependence on fixers has brought some benefits. Traditionally, fixers’ work is uncredited, but in the last year, a number of print media outlets have featured joint bylines or acknowledgments of local staff reporting. “Their role is changing from a source to a contributor,” Gannon says.

Fixers are also developing professionally. In Pakistan, says Khattak, local journalists have developed an interest in investigative journalism because of their work with correspondents. According to Mark Seibel, managing international editor of Knight Ridder’s Washington Bureau, fixers in Iraq “are really learning the skills of journalism.” There are financial benefits as well. Maykuth of The Philadelphia Inquirer recalls that during his many trips to Afghanistan in fall 2001, he saw the daily rate of fixers rise from US$30 to US$300.

But money doesn’t always outweigh the risks. “I learned early on that fixers are in the most danger,” says PBS “Newshour” Senior Correspondent Elizabeth Farnsworth, who has used fixers in Haiti, the Middle East, and throughout Asia. “As a correspondent for a national program, I can get a great deal of attention if I’m in danger, but what about a local fixer?” 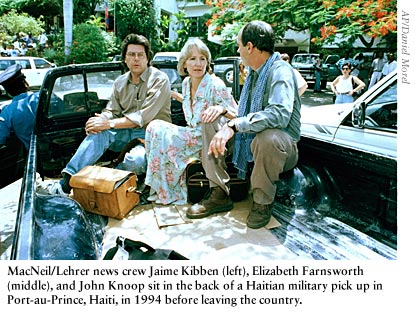 Farnsworth recalls when her Haitian fixer was detained in Port-au- Prince in 1994 while they were shooting footage in restricted areas. Authorities offered to release the fixer, but only if the “Newshour” team left Haiti. Local journalists advised Farnsworth that the fixer’s safety depended on her departure, so the “Newshour” team left. He was eventually freed unharmed, but Farnsworth describes it as one of the worst moments in her career. “I consider it one of my prime duties to look after the people working for me,” she says.

Some journalists, however, believe that many correspondents are not sensitive enough when it comes to exposing their fixers to risk. “What is disturbing is the callow use of fixers by correspondents who come into a region, don’t know it well, then put [fixers] in dangerous situations,” Gannon argues.

Though fixers are often aware of the risks they are taking, some feel they are put in unfair positions. Pakistani fixers interviewed for this article say they often try to dissuade correspondents who ask to be taken to dangerous places but fear that they will lose their jobs to someone else if they decline altogether. “For the money offered, there is always someone who will take them,” says one Pakistani fixer who asked not to be named. In Pakistan and Afghanistan, “There are also cultural dynamics at play,” Gannon says. “People here really want to help out and are not comfortable saying no.”

Most observers believe that the international media community must do more to protect fixers, although there has been a growing awareness of the dangers. Knight Ridder’s Baghdad bureau chief Allam says that in Iraq, she has seen significant changes in the last year, including the introduction of security training, defensive driving courses, and flak jackets for all Knight Ridder fixers. Tamayo of The Miami Herald says that his office has purchased bulletproof vests at a cost of $1,500 to $1,800 for Herald fixers and stringers in Venezuela this year.

Since the mid-1990s, CNN International has provided hostile-environment training to all of its workers, including fixers, going into potentially dangerous situations. According to CNN Vice President for International Public Relations Nigel Pritchard, the definition of a hostile area expanded so much in 2004 that it included the Athens Olympics. Bill Spindle, foreign desk editor at The Wall Street Journal, says his paper’s policy of treating fixers like employees has been consistent, but that there is a substantial rise in the number of instances where intervention is needed on a fixer’s behalf. “We’re using them more often and in more complicated situations,” Spindle says.

Still, argues Tina Carr, director of the London-based Rory Peck Trust, which assists freelance media workers, this awareness has yet to translate into widespread practice. “We hear of fixers around the world who are not provided with the same security equipment as the correspondents they work with or are not adequately compensated for injury or death,” Carr says.

To date, most cases where fixers or translators were evacuated from dangerous situations have been ad hoc. With virtually no insurance or medical compensation for international short-term hires, news organizations have to pay out of pocket, and decisions rely heavily on the individual relationships fixers have with their media outlets. According to Knight Ridder’s Seibel, “The relationship is informal contract labor. How far should an international news organization go to help them? There is probably a need to review and go over policies.”

While many journalists cite a moral obligation to help their fixers, there is also a professional imperative. By targeting fixers, governments and militia groups ultimately discourage local and international coverage of sensitive issues. Rizvi, whose criminal case was pending this fall, says, “What they did to me is their message to people, telling them not to report in those areas.”