Dangerous Assignments
For Nigeria’s besieged independent press, the time that elapsed between the sudden death of Gen. Sani Abacha on June 8 and Chief Moshood Abiola’s fatal heart attack on July 7, proved to be the cruelest month ever for the profession. Abiola, owner of the nation’s largest independent media house, the Concord Group, and widely believed to have won the presidency in 1993’s democratic elections, had been imprisoned by Abacha in 1994. He became Nigerian journalists’ weapon-of-choice in their battle against the military regime which responded with a calculated, and almost successful, campaign to decimate the independent press. With Abiola’s death in detention, the euphoria the press enjoyed upon Abacha’s demise dissipated as quickly as it had erupted.

Amidst this maelstrom, Gen. Abdulsalami Abubakar, a senior career soldier who was virtually unknown outside of military circles, emerged as Abacha’s successor. Seemingly overnight, the country’s journalists prepared to face off with yet another general while simultaneously sounding the alarm on the nation’s editorial pages about a now-predictable national phenomenon — political déjà vu. 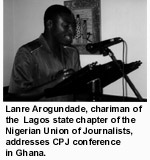 The watchdog private press immediately exposed Abubakar’s relationship to his mentor, close friend, and neighbor, former dictator Gen. Ibrahim Babangida, who has remained a potent force within the military since he ceded power to Abacha in a 1993 palace coup. Babangida has now assumed a public role in the current regime’s desperate attempt to placate citizens’ demands for an immediate transition to democratic rule, courting the same press that he targeted earlier this decade with the parcel bomb assassination of Newswatch editor
Dele Giwa.

The 139-year-old Nigerian press is the continent’s most prolific and vociferous, setting the standards for media practitioners throughout the region. This decade they met their match in the Abacha regime, which set new standards of abusive treatment of the press amongst like-minded regional rulers promoting tactics such as indefinite detentions without charge, secret trials by special military tribunals, torture by police and state security agents, disappearances, office bombings, and bans and seizures of publications.

The regional impact of the regime’s decimation of the private press was exemplified by the unprecedented rapid deterioration of press freedom conditions in the West Africa sub-region. Gambian ruler Yahya Jammeh’s importation and enactment of restrictive Nigerian decrees, many aimed at silencing the press, has rendered the country’s legal system ineffective. At the time of Abacha’s death, exiled Nigerian journalists based in Ghana were being threatened with deportation to Nigeria for critical commentary published in and aired on Ghanaian media.

CPJ held a conference in Ghana in August, which provided leading Nigerian journalists the first opportunity in years to meet without the threat of security raids or detention. As they discussed the recent unanticipated political events in their country with colleagues from Ghana, Zambia, and Argentina, many participants expressed the view that Abubakar’s recent release of detained journalists was not an indication of lasting change, nor did it constitute a “honeymoon” as expressed by observers in the West.

A host of decrees remain available to the regime: The Detention of Persons Decree No. 2, allowing indefinite, incommunicado detention of citizens; the Offensive Publications Decree No. 35 of 1993, which allows the government to seize any publication deemed likely to “disturb the peace and public order of Nigeria; and the Treason and Treasonable Offenses Decree No. 29 of 1993, which was used in 1995 by a special military tribunal to convict Kunle Ajibade, Chris Anyanwu, George M’bah, and Ben Charles Obi as “accessories after the fact to treason” for reporting on an alleged coup plot. The four journalists, who were released by Abubakar in recent months, would still be serving their 15-year prison terms if Abacha were still in power.

Abubakar’s tacit endorsement of the controversial 1995 draft constitution is also widely regarded as an indication of the regime’s refusal to enact systemic change. The draft constitution provides for the creation of a Mass Media Commission that would be granted sweeping powers to restrict journalists’ ability to practice their profession, and grants rulers the authority to silence the press in the name of national security.

Despite Abubakar’s quiet demeanor and his public pronouncements of a commitment to a transition to civilian rule, few observers believe that he has the power to hold the military hawks within the Provisional Ruling Council at bay.

In the meantime, the independent media are watching the regime as it plays to its new constituency — a coalition of Western governments and multinational corporations that, with the general’s assistance, is rapidly shedding its image as a complicit supporter of the worst violator of press freedom in the nation’s history.

Kakuna Kerina is Africa program coordinator at the Committee to Protect Journalists.