Doan Viet Hoat was released from prison in Vietnam on September 1, 1998, midway through a 15-year sentence for publishing pro-democracy newsletters. He was set free under an amnesty program timed to coincide with Vietnam’s national day, but was then immediately expelled from the country.

Kept in isolation throughout much of his imprisonment, Dr. Hoat is Vietnam’s most prominent dissident. A writer and academic, he was arrested in 1990 for his role in producing the independent Freedom Forum newsletter. He was sentenced to 20 years in prison in 1993 — later reduced to 15 years — on charges of trying to overthrow the government. Dr. Hoat had previously been detained without trial from 1976 to 1988, accused of being an “anti-Communist reactionary.” CPJ awarded Doan an International Press Freedom Award in 1993.

The following is Doan Viet Hoat’s account of his imprisonment and exile. 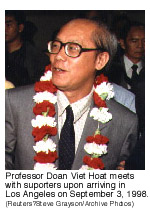 On February 25, 1994 I was moved from Xuan Phuoc Prison, South Vietnam, to Ba Sao Prison, Nam Ha Province, North Vietnam. They also moved three other political prisoners with me on the same day: Tran Tu, Ly Tong and Tran Manh Quynh. In Xuan Phuoc Prison, with the help of some political prisoners being detained there for many years-some for ten years or more-I succeeded in sending out a report on the present situation in human rights in Vietnam (anticipating the then-coming of the UN Human Rights Commission) and a declaration on the occasion of the Communist Party of Vietnam’s mid-term national convention (January 20). As soon as we arrived at Bao Sao Prison the cadres there demanded us to do force labor works. I wrote a letter to Vo Van Kiet, Prime Minister at the time to protest against the poor conditions of living in the camp. I also rejected forced labor as a violation of human rights codes and illegality due to the fact that the Vietnamese court does not convict prisoners with forced labor. Particularly for political prisoners I argued against re-education program because such program could not be applied to political prisoners who are good people and did not commit any criminal action. All four of us signed this letter on April 1. From that day we decided to refuse to participate in any form of forced labor and any type of re-education. They then set up a sort of people’s court to intimidate us and to threaten other prisoners. After that they isolated us form all other prisoners and forbid all family food supply and family visit for three months. On April 25, 1994 I was moved to Than Cam Prison in Thanh Hoa province, about 40 kilometers from the Laos border.

I was imprisoned in Than Cam prison for 4 years, 5 months and 4 days. I was the only political prisoner in the camp and was completely isolated from all other prisoners. No prisoner was allowed to contact me. During the first year they lent me Nhan Dan newspapers (People Daily, the official organ of the Communist Party of VN). From 1996 to the day I left Than Cam they only let me read one newspaper for every quarter, and it was one month old! I was not allowed to receive books, magazines and letters sent to me by my family. I was not allowed to keep any pen neither any piece of paper, written or blank. Not a single piece of paper with written or printed words could be left untouched: they tore them into pieced fearing that they might convey messages to me! The kept all cans of foods and fruits outside of my cell and every time I wanted to use them they would open the cans themselves and check every small piece of fruit or meat. They did not allow me to raise even a baby bird despite my protest. They imprisoned me in cell number 1 and left cell number 2 empty most of the time to prevent me form talking with other prisoners in cell 3, 4… To isolate me further at the end of 1996 they blocked the back window of my cell with cement and bricks which turned my cell into sort of an oven. It became so hot that I had to wear a wet shirt which I ironically called a “personal air conditioner”. In April 1998 when my blood pressure reached 200 over 110 they had to let one criminal come live with me to call for help in case of emergency. Then some high-ranking officials from the Ministry of Police came to the camp to “work” with me. We had some hot disputes and arguments about CPV’s political and cultural policies. Some of the m became angry with me. They told me that since I did not change my political view points and did not make any “progress” in re-education program, the government could not allow me to stay free inside the country, and tha I had to choose either continued imprisonment or family reunion due to my whole family being in the States. Due to complete isolation and therefore lack of information, I had to accept to go to the U.S. to reunite with my family whom I haven’t seen for years (17 years for my two sons). If I could have chosen freely I would have stayed in Vietnam. I did try to do so at the last minute. It was not until about half an hour before they brought me to the airport that they read to me the government’s decision to liberate me. I asked to have the decision paper but they refused to give it to me. If I had had the liberating decision paper in my hand I would have tried to stay in VN! I want to pay your attention to the fact that they demanded my to accept leaving VN at least ten day s before September 28, the day Tran Duc Luong signed the amnesty decision. This is factual proof that my leaving VN was a condition for my release

I was not allowed to keep any pen neither any piece of paper, written or blank. Not a single piece of paper with written or printed words could be left untouched: they tore them into pieced fearing that they might convey messages to me! 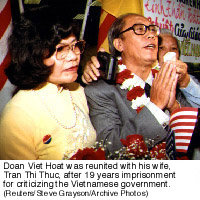 On September 29, 1998 I was moved from Than Cam to B.14, Than Liet, Hanoi, a new prison of the Ministry of Police. There are many air-conditioned rooms in this new prison. I lived in one of those rooms. I met Ly Tong and Tran Manh Quynh who were transferred form Ba Sao prison some hours before I arrived. I also knew that Rev. Thich Quang Do was also there although I did not see him. We were treated with chicken and beef! Alas, due to sudden change of foods and climate I caught a cold and had a diarrhea! These lasted for three days and I felt tired when arrived in Bangkok. In the afternoon of August 31 we met an American consular personnel to sign on our passports. Everything was prepared for us in advance without our knowledge, including my Thailand visa. My two brothers in Saigon were informed of my departure and allowed to meet me before I was brought to the airport. They brought me from Saigon new clothes and a new pair of shoes. Two officials from the Ministry of Police escorted me till the airplane stairs. An old friend of mine came from America to meet me and he bought me a brand new suit. Finally, on September 3rd, 1998, I arrived in Los Angeles, USA, as freed and civilized man!