Colombian journalists have long been in a no-win situation. If they call for peace or for greater public participation in elections, they risk being targeted by guerrillas or paramilitary death squads. If they report on official corruption, they become targets of powerful political figures or their underworld partners.

In the 1980s, drug traffickers were the most violent enemies of the Colombian press. Today, all parties have adopted the “plata o plomo” (silver or lead) motto of the cartels: Journalists who refuse a bribe know they may be shot. Often, amidst this pervasive violence, it is impossible to know why a particular journalist was murdered. For example, Nelson Osorio Patiño was shot to death on August 27 as he was dropping his car off at an auto repair shop in Bogotá. The killer shot him twice in the head and twice in the torso before fleeing on a motorcycle driven by an accomplice.

Osorio was one of the best-known sports reporters in Colombia, a veteran broadcaster, and part owner of a popular television sports show “Gran Prix.” He also owned a regional sports newspaper in the violence-ridden city of Florence, Caquetá, and a local news show, “Revista 7.” While no motive has been established, the Bogotá daily El Tiempo speculated the Osorio was killed because of his friendship with a notorious drug trafficker in his home state. CPJ is investigating the murder of Osorio and four other Colombian journalists. Through its investigations, CPJ has confirmed that four journalists were killed in Colombia during 1998 in direct reprisal for their work.

During the four-year administration of President Ernesto Samper (who left office in August)
11 journalists were killed in the line of duty. Dozens more were attacked, threatened, or kidnapped. Fabio Castillo, who until recently worked for the Bogotá daily El Espectador says it’s long been routine to include the word “another” in the headline announcing a journalist’s murder. 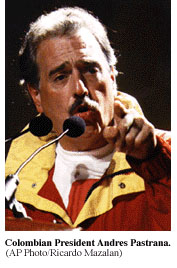 The press is cautiously hoping that things will change under the new president Andres Pastrana Arango. Although violence continues unabated, Pastrana had taken some promising steps toward ending the bloodshed even while still president-elect: Both the guerrillas and paramilitaries said they’re ready to talk peace with him. Journalists hope Pastrana can create a climate in which the press can function without fear of reprisal.

But that hope is tempered by the press’s experience with Samper, whom they widely supported when he came to power in 1994. Journalists believed he would curtail the drug-related violence to which they had so often fallen victim. But after the press reported allegations that Samper had received campaign donations from the Cali cartel, relations between the media and the president soured. While Samper has acknowledged his campaign received money from drug traffickers, he claims he was their “victim.”

Samper took several steps that significantly limited press freedom. When cassettes emerged allegedly proving the narco-donations to his campaign, he halted their broadcast with a decree prohibiting the media from broadcasting or publishing declarations of guerrillas, drug traffickers, or criminals.

In 1995, a bill was passed that penalized reporting on ongoing criminal investigations of government officials. (The attorney general later declared the bill unconstitutional.) And in 1996, a law was passed by the popularly elected Congress under which television stations could lose their broadcasting license if their programming failed to be objective, impartial, or balanced.

In August 1997, during a meeting of the Inter-American Press Association in Guatemala, Samper publicly accused the press of thriving on the violence it was reporting. That same month, two of his cabinet ministers were forced to resign after a Bogotá magazine published a transcript of their cellular phone conversation in which they discussed Samper’s plans to award radio frequencies to his friends and supporters. Historically, the Colombian press has been vibrant and aggressive, despite the fact that Colombia has long been the most dangerous country in the hemisphere for journalists. But Samper’s hostile stance rapidly undermined the press, leading to self-censorship among those not silenced outright.

President Pastrana, a former journalist, had pledged to change the situation. And while few question his intentions, already, in Pastrana’s first months in office, Colombians are recognizing that the violence has become so deep seated and ubiquitous that it is likely to continue regardless of who is president. Nelson Osorio Patiño was one of four journalists killed since Pastrana began his term on August 7.

Marylene Smeets, a lawyer specializing in human rights in Latin America, is the research assistant for the Americas program at the Committee to Protect Journalists, based in New York.