On the day Pope John Paul II arrived in Cuba, journalist Ricardo González Alfonso found two agents from the Interior Ministry’s Special Brigades camped on his doorstep. They proceeded to tail Alfonso, a correspondent for the independent news agency CubaPress, until a CNN camera crew arrived at his house the next day. 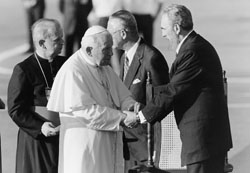 On January 24, one of the same two agents had pitched a tent below the apartment of Ana Luisa López Baeza, the vice president of CubaPress. When López left her apartment at four the next morning to attend the Pope’s last mass, she found the agent waiting for her. He shadowed her all day, despite her attempts to disguise herself by borrowing other people’s hats. López eventually offered the agent something to eat–after all, he was only following orders.

Independent journalists in Cuba have faced systematic persecution over the last five years, but many had hoped to be able to work freely during the Pope’s visit, when Cuba was in the international spotlight. This was not to be. While State Security agents may have been more discreet with the Pope on the island, independent journalists report that their every move was scrutinized. Nor were the domestic media singled out: Although 2,478 foreign journalists had visas to cover the historic visit, many of the most experienced reporters who had written stories critical of the Castro regime were barred from the island.

CPJ wrote a letter to Fidel Castro on the eve of the Pope’s arrival, noting that Cuba’s decision to selectively deny visas to certain foreign reporters constituted a violation of international law. CPJ also called on the Castro government to end the crackdown on Cuba’s press, beginning with the release of two journalists who CPJ believes have been jailed for their reporting.

Despite CPJ’s appeals, however, no journalists were among the 112 political prisoners released to date as a concession to the Pope after his visit. To the contrary, CubaPress correspondent Juan Carlos Recio Martínez was sentenced to a year of forced labor on February 13 for crimes against state security.

Cuban journalists report that they have been under regular surveillance since the Pope left Cuba. Jorge Luis Arce Cabrera, correspondent for the Buró de Prensa Independiente de Cuba (BPIC), and Jesús Egozcue Castellanos, of the independent news agency Línea Sur Press, received a visit from a State Security official on January 30. The official warned the journalists that he had been keeping track of their reporting since the Pope’s visit and if they report news that taints Cuba’s image, they will go to prison.