Executive Director William A. Orme, Jr., who was interviewed on CNN International, Fox News “In Depth,” MSNBC “Online,” and numerous radio shows about Attacks on the Press in 1997, traveled to California for the April 6 launch of the book at a program at the Freedom Forum in San Francisco. He also addressed the regional conference of the Society for Professional Journalists in Spokane, Washington.

Program and Editorial Director Alice Chasan presented Attacks on the Press in 1997 to the International Committee at the American Society of Newspaper Editors’ annual conference in Washington, D.C., in April.

Speaking for the first time outside Indonesia since his release from more than two years in prison, Indonesian journalist Ahmad Taufik accepted the CPJ International Press Freedom Award from A. Lin Neumann, CPJ’s Asia program coordinator, November 19 in Vancouver, B.C. Neumann presented the award at a meeting of journalists that coincided with a gathering of the Asia Pacific Economic Cooperation forum. 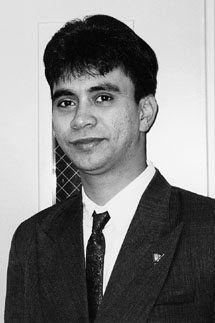 Taufik, founding president of the Alliance of Independent Journalists, said, “Journalists who try to be critical are intimidated and are under constant threat of having their publications banned.”

Taufik and his fellow journalist Andreas Harsono, Bangkok correspondent for the newspaper The Nation, traveled on to New York, where they addressed a CPJ forum on December 2. Neumann wrote about the press and the Asian economic crisis in the March-April issue of the Columbia Journalism Review.

Another formerly imprisoned International Press Freedom Award recipient, Ocak Isik Yurtcu, traveled to New York in October–just months after his release from a Turkish prison in August– to attend CPJ’s 1997 award ceremonies. Yurtcu’s appearance before the audience of nearly 900 was electrifying. “I’m very sorry that I’m a year late to meet you,” the 1996 award recipient said. “I am free today because of you, CPJ, led by Bill Orme, Terry Anderson, Josh Friedman and Peter Arnett–and because of the beautiful solidarity of international and Turkish journalists. And I strongly believe that if this solidarity continues, not only may I stay free, but that other journalists will also be freed in Turkey.” CPJ’s campaign to free Yurtcu and other jailed Turkish journalists was the lead story of the Summer 1997 edition of Dangerous Assignments.

Chrystyna Lapychak, CPJ’s program coordinator for Europe and the Republics of the Former Soviet Union, travelled to Warsaw in November to brief delegates at the meeting of the Organization on Security and Cooperation in Europe on Paradoxes in the Caucasus, CPJ’s special report on press freedom in Armenia and Azerbaijan, alongside the report’s author, Nicholas Daniloff. The report was released January 15 in Washington, D.C., at a seminar sponsored by the Kennan Institute for Advanced Russian Studies. An excerpted version appears in Attacks on the Press in 1997. Lapychak was in Budapest in early March for an Open Society Institute meeting of press freedom groups.

CPJ’s Africa program coordinator Kakuna Kerina met with the Rev. Jesse Jackson, U.S. Special Envoy to Africa, before his March trip to Africa with President Clinton to brief him on press freedom issues and CPJ’s campaign for the release of International Press Freedom Award recipient Christine Anyanwu and other imprisoned Nigerian journalists. CPJ wrote to Pope John Paul II on the eve of his visit to Nigeria, apprising him of the cases of 17 journalists imprisoned there. All were included on the Pope’s list of prisoners of conscience whose immediate release he requested from Gen. Sani Abacha.

Americas program coordinator Joel Simon briefed White House aides prior to President Clinton’s trip to Latin America, where the president spoke out publicly for press freedom. On January 24, Simon attended a conference in New Orleans on Mexico’s Press, sponsored by Chilean University, and on February 14 he participated in an organizational meeting in Tiajuana of la Sociedad de Periodistas, the Society of Jouralists, a new group formed “to ensure that journalists in Mexico are able to carry out their professional responsibilities without fear of reprisal.” On April 18, Simon will speak at the Summit of the Americas in Santiago de Chile on the role of government in protecting press freedom. On International Press Freedom Day, May 5, he will participate in program at the Freedom Forum in Buenos Aires, Argentina.

Joel Campagna, CPJ Middle East program coordinator, spoke on press freedom in Jordan in a seminar in Amman in October organized by Article 19 with two Jordanian partners, Al-Urdun Al-Jadid and the Arab Media Institute. Campagna met with journalists and government officials on a 10-day fact-finding mission in Jordan that resulted in the publication in Attacks on the Press in 1997 of the special report “Jordan Reins in the Press,” also published in the Spring 1998 issue of Middle East Report.