The Asian economic turmoil of the last eight months struck many international observers as a sudden calamity–trouble that seemed to drop from the sky like an alien invader. But in fact, the signs of structural weakness and the cracks in the veneer of financial robustness were in plain view for those in a position to take a hard look. In Indonesia, the family of President Suharto has had its hands in the economy for decades. Malaysia’s Prime Minister Mahathir Mohamad has long pursued expensive vanity projects. In South Korea and Thailand, many companies and banks have ignored financial reporting requirements with scant legal penalty. 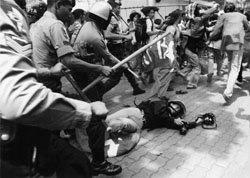 In each of these countries, the local press has been hampered in covering these blatant abuses by either outright government censorship, or a culture of secrecy that has made routine financial reporting woefully unreliable. And some foreign correspondents simply accepted the Asian “miracle” at face value, or trusted the boosterism of financial analysts and other sources with a stake in good news.

“Six months ago, all the media in the world were giving their blessing to these countries,” said a senior banker in Hong Kong, who once covered the region as a financial reporter. “The reality is that it is very hard to find information in most of these countries. There is very little information in Thailand, Indonesia, Malaysia, even Korea. And then the local press seldom analyzes what they do report. You are left divining sheep entrails in most cases.”

Laws criminalizing the reporting of financial data in such countries as Singapore, Indonesia, China, and Malaysia severely restrict the flow of information. In country after country, even in more democratic societies such as Thailand, cozy relationships between governments and financial institutions evade press scrutiny because of either self-censorship or frequent bribes offered to low-paid reporters. This chronic lack of information and a culture of less-than-aggressive reporting have contributed to the region’s financial panic and the resulting need for a massive $117 billion (and counting) International Monetary Fund bailout. Alarmed, international financial leaders are suddenly awake to the need for a free press, and “transparency” is the buzzword of the day. As the storm was gathering in September, the Committee to Protect Journalists found an eager audience at the annual meeting of the World Bank and the IMF in Hong Kong for a forum on financial markets and press freedom. At the gathering, Deputy Treasury Secretary Lawrence H. Summers, said, “A free and undisturbed press is important because that is the vehicle through which information is conveyed, and once conveyed, is trusted. Information is at the center of what makes financial markets work.” By that standard, many of the most highly touted Asian miracles never worked, and a shackled press only deepened the turmoil. Instead of reporting accurately on the negative economic impact of Malaysian prime minister Mahathir Mohamad’s many high-profile, low-return vanity development projects, for example, the Malaysian press has been cowed and subdued. Pushing the limits can lead to unemployment, an expensive libel suit, or criminal prosecution for violating national security.

Throughout the region, the press has traditionally offered an uncritical account of the official line, thus distorting the national debate. In Indonesia, President Suharto has been forced by the IMF to acknowledge the degree to which his family controls the country’s economy. But for decades, reporting on these realities could land Indonesian journalists in jail. Suharto closed the only widely trusted Indonesian publication, Tempo magazine, in 1994 because of its reporting on the Suharto family, economic corruption, and human rights abuses in East Timor. Even now, officials continue to harass journalists once associated with Tempo.

Indonesia, seen for years by bankers, economists, and some journalists as yet another miracle, now teeters near chaos with the rupiah having lost 80 percent of its value against the U.S. dollar in just six months. World Bank President James Wolfensohn was forced to issue a mea culpa when he visited Jakarta. “I think we got it wrong, along with a lot of people,” he said on February 4. “I was caught up in the enthusiasm of Indonesia. I am not alone in thinking 12 months ago that Indonesia was on a very good path.”

Even in countries with a relatively free press, business reporting and economic analysis are compromised by both explicit and tacit taboos. Chong-Hyuk Kim, a reporter for the Joong Ang Daily News in South Korea, told a Freedom Forum panel in San Francisco in January that South Korea’s ostensibly democratic government barred reporting on the size of foreign reserves and foreign debt. In addition to specific restrictions, he said, “It has become traditional practice between government and media not to report critical and important information. The government insisted [that] if that kind of information were revealed, it would be harmful to national security and the national reputation. The media accepted that kind of assertion.”

“The media,” Kim added, “abandoned [their] duty as watchdog of society.”

If the Asian media, supported by international demand for critical financial information, now take their watchdog role seriously, they can help to forge a new climate of openness in the aftermath of the crisis. That is what happened in Latin American after the collapse of the Mexican peso in 1994. Already, in South Korea and Thailand, the press has pushed much-needed reforms on the government while defending its freedom, and the panic has eased somewhat. Unless independent inquiry and the demand for government accountability becomes the journalistic model throughout Asia, the most important lessons of the economic crisis will have gone unheeded.