Liberian broadcast journalist Alex Redd became the focus of international attention late last year when he was kidnapped and tortured by state security forces for attempting to investigate and report on the murder of political opposition leader Samuel Dokie, his wife, and two family members. Upon release, Redd was arrested and tried for inciting the public against the government. He fled to the United States in January 1998 after being released on bail. He spoke with CPJ’s associate editor Jesse T. Stone about his experiences, and the state of the media in Liberia.

JTS: Let’s set the stage for a moment. Liberia has just gone through a seven-year civil war, in which dictator Samuel Doe was ousted and replaced by the democratically elected Charles Taylor.

AR: Well, as you know, the only way out of the war was to hold an election. And the media played a very important role in disseminating information. But there wasn’t really enough time, and the international community didn’t help Liberian journalists with this, so the press couldn’t really educate people about the electoral process. In the end, Charles Taylor won […] because his forces controlled 90 percent of the country, and providing services and security to all those people, so of course he was going to win. But it was surprising that Ellen Johnson Sirleaf [who came in second] made such a strong showing, and I think this was because of media coverage. 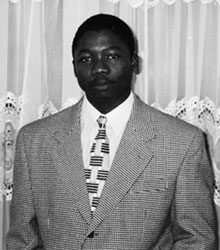 JTS: And since the election? What has been Taylor’s relationship to the press?

AR: Before the election, the media had no problem with Taylor. But there is a long tradition of persecution of Liberian journalists–this began during the rule of Samuel Doe, when journalists were murdered, habitually arrested, detained without charges, threatened. Charles Taylor has continued these practices.

JTS: You were the producer and host of two radio programs, “The World of Jazz” and the news show “Sunrise Program.” How did you run afoul of the government?

AR: On November 28, Dokie was arrested and interrogated, and then he and his wife and family were eventually killed. I went to the Dokies’ funeral on December 21 and interviewed their friends and relatives. I was in a car with my brother and others on the way back to Monrovia when security forces stopped us. They singled me out and took me to a nearby rubber farm to interrogate me. They flogged me and tied me and tortured me–kept me in custody for 2 nights and threatened to kill me. Meanwhile, my brother, Benjamin, had gotten back to Monrovia and told the radio station what had happened, and it was all over the press that I was missing.

JTS: Is that why they let you go? Because of the publicity?

AR: Maybe. I don’t know. They released me on December 23, at midnight on the outskirts of Monrovia, in my underwear, and I made my way to an ECOMOG [West African peace keeping forces] checkpoint, and from there was taken to the hospital, and from there to police headquarters. They held me for 48 hours without charging me. The police director, Joe Tate, told me that he would bring the full powers of his office against me but wouldn’t say why.

They held me over the weekend, and only brought me to court on the 26th because Koffie Woods, Liberia’s best-known human rights advocate, filed a writ of habeas corpus. On the 26th they charged me with criminal intent to commit treason. They said I gave conflicting statements about my ordeal.

JTS: You’d just been through a kidnapping and torture, and the official response was to arrest you?

AR: Well, the government was very angry with me, because of the way that my brother publicized my abduction. It was very embarrassing for the government. And so they said that by publicizing this I was inciting the public. So they put me in the notorious Monrovia Central Prison over the weekend, the biggest jail in Liberia.

On Monday the government realized they couldn’t justify the treason charge, so they recharged me with making a false report to law enforcement officials about being abducted. Then they released me on bail. But I couldn’t go home. I spent nights with friends because I was afraid to go to my home.

JTS: What did you think would happen?

AR: What did I think? I thought they would kill me. And on January 8, I received a letter warning me that my life was in danger. It was an anonymous letter. Then, on the 11th, someone broke the windows and tore the curtains in my home. I wrote a formal letter of complaint to the Justice Ministry, and sent copies to the Press Union, the Catholic Justice and Peace Commission, other government offices, telling them also about the anonymous letter, but I received no response.

JTS: And you took this silence as a bad sign?

AR: Very much so. My life was in danger. So I left the country on the 23rd and got to New York on the 24th.

JTS: What about getting a visa?

AR: I had a multiple entry visa from the fall of 1997, when I’d been privileged to participate in a training program at the Pro Radio group in Minnesota.

JTS: I remember the day you came to CPJ’s office the next week. Had you planned on that?

AR: No, no. I was met in New York by my friend, a Liberian journalist named Teakon Williams, and he brought me articles, including from the Internet, all about what had happened to me. And I saw that the source for some of these was CPJ, so I got the number and called. I knew about CPJ. CPJ’s work is very well known by the press in my home. And I just want to say that CPJ has shown me great love and protection. I’ve been highly encouraged by CPJ–they are truly dedicated to assisting journalists, to protecting them by all means.

JTS: Have you been in touch with your family and colleagues in Monrovia?

AR: Well, my brother Benjamin had to leave Liberia because strangers were coming around his house looking for him, and more government charges were being made against both of us. So he fled to the Ivory Coast. And I know that Sylvia Henri she was the co-host with me of the “Sunrise” she was being threatened and fled to the United States as well in January. There are a lot of Liberian journalists here, and they’ve formed a U.S. branch of the Press Union of Liberian Journalists. They sent me a letter and I met with them in Philadelphia. We’re planning a conference for April 11th in Washington, D.C.

As for the press in Liberia, the situation gets worse. I spoke with the editor in chief of a daily, and he told me things are very bad. The Minister of Information has released new press guidelines, saying all media outlets must pay 5,000 Liberian dollars for a licensing fee. And if the Ministry finds a media outlet’s work unacceptable, sub par, it will be shut down.

JTS: What are your U.S. plans?

AR: I’ve applied for a fellowship for funds to study broadcast journalism here, and if I don’t get that I’ll look for other ways to study here. I want to enhance the knowledge I have of my profession–to know about the ethics and conditions of journalists in other nations, and go back to Liberia with this knowledge as soon as it is feasible. CPJ has helped me a great deal, but it is very difficult now because I cannot work and have nothing to do but wait.