For the second time in less than a year, a group of Palestinian reporters covering clashes in Hebron between Palestinians and Israelis were fired upon with rubber-coated metal bullets by the Israel Defense Forces (IDF). Eight journalists were wounded in the March 13 attack, which witnesses have characterized as the IDF’s intentional targeting of the journalists. The incident has drawn widespread condemnation from local and international human rights organizations. 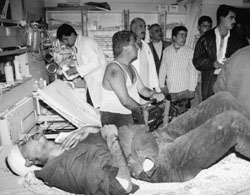 Among the wounded reporters were Nael Shiyoukhi, Mazen Dana, and Bilal al Joneidi of Reuters; Majdi al-Tamimi and Amer al-Jabari of ABC News; Hazem Bader and Imad al-Said of the Associated Press; and Ayman al-Kurd of Amal TV. Several of the journalists described the incident to CPJ, saying they came under fire while leaving the scene of a violent encounter that erupted when a large group of Jewish settlers entered the Palestinian-controlled area of Hebron, throwing stones. Palestinians responded in kind, and the IDF entered the fray, opening fire on the Palestinians. The journalists said they were at a considerable distance from the conflict.

“The soldiers hurried to the scene, and it seemed as if they were going to chase the stone-throwers,” said Mazen Dana, describing subsequent clashes that took place between Palestinians and the IDF to B’tselem, an Israeli human rights group. “Suddenly they drew their weapons at us and started to shoot at us. We shouted to them in Hebrew and English that we were all journalists. There is no doubt that they heard our shouts, but they continued to shoot.”

Video footage shows in graphic detail the wounding of the Nael Shiyoukhi, a sound technician for Reuters TV. Initially shot in the head by a rubber bullet, he is shown illuminated by camera light, being hit twice more as he lay on the bleeding on the ground, bleeding profusely.

“I warned my partners that the soldiers have returned. We assumed that they were heading in the opposite direction. They were ready to start shooting…They assumed their position with one knee on the ground and started shooting at us heavily, although we were 25 meters away from them…My partners hid behind a dumpster. The soldiers kept shooting at us even though they knew we were journalists. I screamed to them in Hebrew to stop shooting, and that we were journalists, but to no avail. The first rubber bullet got me in the head. I fell on the ground…Everyone tried to approach and help me, but they were under fire as well…I tried to get up the first time, and I failed. When I tried a second time, I was shot again in my waist. As soon as I got shot in my right knee, my partners were unable to get to me.”

One of the journalists who attempted to come to Shiyoukhi’s aid was Dana, who was hit in the shoulder. Amer al-Jabari told PHRMG that all the journalists tried to help Shiyoukhi to safety, and as a result were also fired upon. “When I tried to help him,” said al-Jabari, “I was wounded by a rubber bullet in my right arm and another in my right leg.” According to Dana, soldiers continued to fire at the reporters as they attempted to carry Shiyoukhi into a car.

In a letter sent to Reuters shortly after the incident, the IDF said that a “preliminary inquiry” found that “from the soldiers’ vantage point, the journalists were in the same direction as the rioters, and due to the darkness and the confusion at the site it was impossible to distinguish the journalists from the rioters.” The letter went on to add that the rubber bullets that hit Shiyoukhi as he lay on the ground were “none other than ricochet that struck his coat.”

“I think that the shooting was aimed at the journalists deliberately,” Mazen Dana told B’tselem, “with the intention to frighten us, to deter us from doing our assignment and from covering the many events occurring in Hebron and the impossible situation prevailing in this city.”

In a separate incident exactly nine months earlier, four reporters–Imad al-Said of the Associated Press, Mazen Dana of Reuters, Amer al-Jabari of ABC, and Diya Juabi of Abu Dhabi TV–were wounded by IDF gunfire while covering a group of Palestinian demonstrators burning an Israeli flag in Hebron. Eyewitnesses to that incident, which occurred on July 13, said that the attack appeared to be intentional–three of the four journalists were at a considerable distance from the demonstrators and were easly identifiable as members of the press by the camera equipment they carried. To date, neither CPJ nor the Tel Aviv-based Foreign Press Association is aware of any disciplinary action against the soldiers involved in this incident.

More On:
Israel and the Occupied Palestinian Territory
More On:
1998 Spring/Summer
Mazen Dana