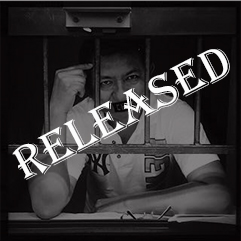 After nine months in prison and reports of due process violations, Pedro Canché has finally been released! Thank you to all who supported him.

Canché, an independent journalist and activist for Mayan causes, was detained by state security forces and charged with sabotage, according to documents prepared by the freedom of expression group Article 19 that were provided to CPJ by Canché’s lawyer, Maria Araceli Andrade Tomala.

The charges against Canché stemmed from a criminal complaint brought against him by Fernando Alfonso Trujillo, the local manager of the state water commission, who accused Canché of inciting protesters to block access to the commission’s headquarters in the municipality of Felipe Carrillo Puerto on August 11. That demonstration came amid a series of protests in August against increased water bills in the state of Quintana Roo, according to news reports . A new state law passed this year criminalizes blockading public roads in protests, according to news reports.

The complaint alleged that witnesses saw Canché taking photographs on the days the protesters blocked the building and that he had personally encouraged people to close off the site, according to Canché’s lawyer. Canché said he had witnesses and evidence that placed him in Cancún on the day that the headquarters were blocked, according to his lawyer.

Canché had written posts about the protests on Twitter. He also posted videos of the protests on YouTube. In one widely viewed video , dated August 24, 2014, he harshly criticized policies of the state governor, Roberto Borge, toward the Mayan population, such as the poor quality of local hospitals in their cities and a rise in certain fees and taxes. A few of his photographs of the protests were published in the national magazine Proceso and then reprinted on the website of the daily Noticaribe.

Canché told CPJ in a telephone conversation in late September that he served as a source for correspondents for the outlets Luces del Siglo, Proceso and Noticaribe and provided them with information and photos that he said he was not paid for. He told CPJ that he had previously worked as a reporter for the Mexican news agency Notimex and other dailies and a radio station, and that at one point he had founded a small local magazine. Canché told CPJ he was speaking from a hospital room where he was being treated after being beaten by other prisoners in the jail where he was being held in Quintana Roo.

In December 2013 and January 2014, Canché posted videos to YouTube in which he criticized the governor’s treatment of a dengue virus outbreak and the official’s decision to build a new hospital in the tourist destination of Cancún rather than in Mayan communities.

In February 2015, Reynaldo Piñón Rangel, the Sixth District Judge of the state of Quintana Roo, ruled that Canché’s right to due process had been violated and said he found several irregularities in the charges and proceedings against the journalist, according to Canché’s lawyer and news reports. Judge Piñón said there was no conclusive evidence that sabotage had occurred nor that Canché was even present on the days that the events described in the charges were alleged to have happened. He stated: “It is stressed that the responsible authority committed inaccuracies and inconsistencies in relation to the circumstances of time, manner and place of the commission of the wrongful act.” Judge Piñón did not release the journalist and ordered a lower court judge, the one who upheld a previous challenge to Canche’s imprisonment, to review the case again.

On May 28, 2015 a local court declared Canché innocent of the charges and ordered him to be released, Canché’s lawyer, Maria Araceli Andrade Tomala, told CPJ, and he was freed the following day. “We are relieved that Pedro Celestino Canché Herrera’s ordeal is over and welcome his release after almost nine months of unjust imprisonment,” said Sara Rafsky, CPJ’s Americas research associate. “Mexico is already one of the most dangerous countries for the press. Authorities should ensure that journalists do not face the additional threat of imprisonment or state retaliation.” Photo credit Pedro Canché: Lucía Vergara/Article 19