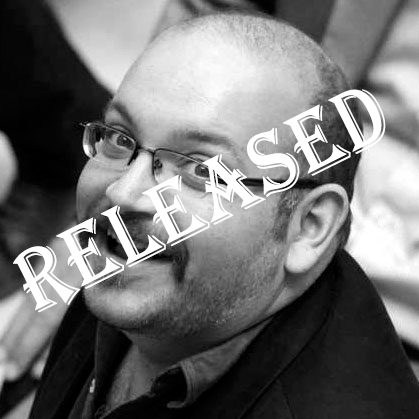 Jason Rezaian was released from prison on January 16, 2016 as part of a prisoner swap deal, according to a report in The Washington Post that said U.S. and Iranian officials had confirmed his release.

Rezaian, correspondent for the U.S.-based Washington Post, was arrested in Tehran along with his wife, Yeganeh Salehi, a journalist for the UAE’s National newspaper, according to news reports. Rezaian, a U.S. citizen, and Salehi were arrested after their Tehran home was raided by security forces who confiscated their personal belongings, including laptops, books, and notes, news reports said. The Washington Post reported on October 6 that Salehi had been freed the week before.

Before becoming the Washington Post correspondent in Tehran, Rezaian was a freelance reporter who wrote for publications outside Iran including the San Francisco Chronicle and Slate.

On May 26, 2015, Rezaian was tried in Branch 15 of the Tehran Revolutionary Court. The charges against him included espionage, “collaborating with hostile governments,” “propaganda against the establishment,” and allegations that he gathered information “about internal and foreign policy,” The Washington Post reported. His case file presented no evidence to justify the charges, according to a statement from Rezaian’s lawyer, Leila Ahsan, the Post reported.

After four closed-door hearings, Rezaian’s trial concluded on August 10, 2015. In speaking to reporters after the trial, Ahsan said Iranian law required the verdict to be issued in a week.

In late 2014, Rezaian’s brother, Ali, told CPJ that the journalist had been kept in solitary confinement since his arrest, which had taken a toll on his mental and physical health. He was moved out of solitary in January 2015, his brother told The New York Times. Rezaian, who has high blood pressure, had developed problems with his eyes and other body pains. The journalist is being held in Evin Prison, according to news reports.