Days before Maria Ressa came to New York to accept CPJ’s 2018 Gwen Ifill Press Freedom Award, the Philippine government announced that it planned to indict her and the news website she founded, Rappler, for tax evasion and failure to file tax returns.

But that didn’t stop the veteran journalist one bit.

“We at Rappler decided that when we look back at this moment a decade from now, we will have done everything we could: We did not duck, we did not hide,” she said in a rousing speech at CPJ’s awards ceremony on November 20. “We are Rappler, and we will hold the line.”

On December 3, Ressa turned herself in to Philippine authorities after a warrant for her arrest was issued over the weekend. This followed the filing of five separate tax cases by the Philippine prosecutor against Rappler and Ressa, despite CPJ and Reporters Without Borders writing an open letter to the Philippine prosecutor general, calling on him to stop his department’s persecution of Ressa and Rappler.

CPJ will continue to call on Philippine authorities to stop their legal harassment of Ressa and Rappler. “The spurious charges should be dropped before any more damage is done to [President Rodrigo Duterte’s] administration’s already threadbare credibility,” CPJ Senior Southeast Asia Representative Shawn Crispin said.

CPJ’s award winners in the spotlight

In November, CPJ honored four journalists at its 2018 International Press Freedom Awards dinner for their bravery in the course of their work: Sudanese freelancer Amal Khalifa Idris Habbani, Venezuelan investigative reporter Luz Mely Reyes, Ukrainian broadcaster Anastasiya Stanko, and Vietnamese blogger Nguyen Ngoc Nhu Quynh, also known as Me Nam or “Mother Mushroom,” who was released from prison in October. “This newly gained freedom would only be meaningful if I use it as a voice for the oppressed back in Vietnam,” Quynh said.

After speaking to the awardees about the challenges to the press in their countries, Nauert provided a readout of her meeting to journalists at a State Department press briefing. “These women were incredible representatives of your profession,” she told the journalists in the room. “They shared with me their stories of harassment, of threats they have received, the intimidation, the detention, and their kidnapping that they suffered simply for doing their job.”

The awardees also participated in a tour and reception at the National Press Club, met with the EU delegation to the U.S., and visited The Washington Post and met with its journalists. A week later, the Post‘s editorial board published an op-ed that called the “selfless courage” of the awardees an “inspiration–and a reminder” of how fragile press freedom can be and how important it is to protect it.

“I was scared when they first locked me up for 10 days,” Quynh told the Post editors. “I thought of my children, and I thought I would stop. Then I realized that is exactly what the government wants. They want to shut me up. And I thought, if I let fear consume me, I would no longer be me. I do not want to set that example for my children.”

On Thursday, U.S. Senator Patrick Leahy (D-VT) made a statement on the Senate floor, citing CPJ research and highlighting CPJ’s 2018 awardees to emphasize the importance of press freedom. Check it out here.

CPJ launches campaign highlighting Khashoggi and the importance of journalism 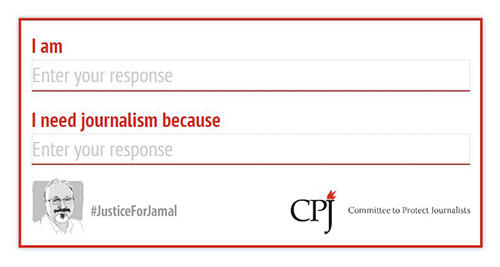 At CPJ’s 2018 International Press Freedom Awards dinner, CPJ launched a campaign, #JusticeForJamal, to honor slain Saudi journalist Jamal Khashoggi and to highlight the importance of journalism. The campaign calls on you, the public, to share why journalism matters to you, and is also highlighted on The Washington Post‘s website.

On Wednesday, CPJ’s Washington advocacy manager, Michael De Dora, spoke at an advisory panel in Washington in support of a resolution to name a section of the street in front of the Saudi embassy “Jamal Khashoggi Way.” The resolution passed, and is going to the City Council.

CPJ met with the Tanzanian ambassador to the United Nations in late November to discuss the detention of CPJ Africa Program Coordinator Angela Quintal and CPJ Sub-Saharan Africa Representative Muthoki Mumo in November. The meeting followed a letter CPJ wrote to Tanzanian President John Magufuli in which CPJ Executive Director Joel Simon expressed his grave concern about the detention.

On November 7, Quintal and Mumo were held for several hours in an undisclosed location by Tanzanian immigration authorities. Before being led away, Quintal posted the above tweet on her personal Twitter account. Authorities searched their electronic devices, confiscated their passports, and later accused them of being in the country illegally, which was false.

In an op-ed for South Africa’s Daily Maverick, Quintal recounted the experience. “The agents claimed they had been watching us for several days and knew whom we had met. They repeatedly accused us of lying,” she wrote. “We were alone at the mercy of a posse of men, some of whom were very abusive and hostile.”

Quintal and Mumo were released after several hours. But, Quintal wrote, “while we could fly out of Dar, we remain concerned that the journalists we left behind did not have the luxury of doing the same.”

On November 28, London’s Royal Institute of International Affairs presented CPJ with the 2018 Chatham House Prize. The prize is given to a person or organization that Chatham House members believe had made the most significant contribution to the improvement of international relations the previous year.

CPJ Executive Director Joel Simon accepted the prize on CPJ’s behalf and spoke about the importance of protecting journalism and free speech. “We must defend not just journalism but the journalists who bring us the news,” he said during the panel discussion that followed. “So much is at stake.” Local journalists “are the front lines and the whole global information order depends on the work” that they do.

Every Friday, CPJ staff puts together a new weekly newsletter that brings you, our readers, the latest in press freedom and journalist safety news.

The newsletter, called “The Torch,” features global press freedom updates, a spotlight on a global issue, a section on what CPJ staff is reading, and up-to-date numbers on journalists killed around the world.

For a blog post in November, CPJ’s North America research assistant, Stephanie Sugars, spoke to three journalists and a security expert about how the Capital Gazette shootings has affected their approach to their work. “I have a folder behind my desk full of hate mail, and that’s just the stuff that gets sent to me,” one journalist in Sandpoint, Idaho, told her. “I get two or three emails a week on average that are fairly nasty, and we’re a small, small town.”

CPJ reported on the assassination of prominent Syrian radio host Raed Fares and photographer Hamoud al-Jnaid in November, as they were headed to cover a protest. A journalist who was in the car with them told CPJ: “Over the past two months we have been receiving threats at our office from armed groups, including the Al-Nusra Front.”

A prominent journalist has been charged with misuse of sensitive personal information in Hungary, where critical media has faced challenges under Prime Minister Viktor Orbán. In November, CPJ reported on the charges filed against independent reporter András Dezső that CPJ believes are in retaliation for his investigative reporting.

“Where I give, and why: An idiosyncratic #GivingTuesday list,” The Daily News

“The greatest threat to American journalism: the loss of neutral reporting,” The Hill

“The silencing of Pakistan,” Al Jazeera