On September 20, CPJ published a special report, called “Journalists Not Terrorists,” on Cameroon’s use of a broadly worded anti-terror law to arrest and threaten journalists. The legislation was put in place in 2014 as part of an effort to counter attacks by the extremist group Boko Haram.

The day the report was launched, Communications Minister Issa Tchiroma-Bakary wrote a series of posts on Twitter, saying that in Cameroon “there is no risk in practicing journalism or voicing one’s political views.” In another tweet, he wrote, “Journalists are free.” The next day, he released a statement, calling the report “vitriolic.”

But CPJ found that the anti-terror legislation is being used by Cameroonian authorities to silence critics and suppress dissent. And one journalist knows this all too well.

Ahmed Abba, a reporter for Radio France Internationale’s Hausa service, was arrested in July 2015 and questioned about the activities of Boko Haram. Abba mostly covered refugee issues but also covered attacks carried out by the militant group. He was charged with terrorism and sentenced to 10 years in prison and a fine.

“The outrageous sentence given to Abba signals the lengths that Cameroonian authorities are willing to go to intimidate the media and thwart freedom of the press,” said CPJ’s Africa program coordinator, Angela Quintal.

CPJ has called for Abba’s release in news alerts, statements, and letters. We also included him in our “Free the Press” campaign, which raises awareness on journalists imprisoned globally on anti-state charges. In November, CPJ will honor him with an International Press Freedom Award.

We will not stop fighting to ensure that no journalist is jailed for his or her work–in Cameroon or anywhere else in the world.

Want to hear about press freedom in the U.S.? Sign up to the Press Freedom Tracker 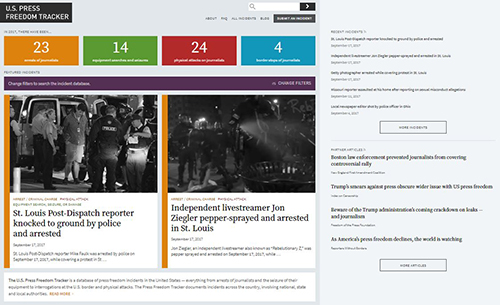 Previously, there was no documentation to show that the climate for press freedom in the United States is declining. Now, there is.

There have been 23 arrests of journalists in the United States in 2017. Twelve of them are still facing criminal charges. Twenty-four physical attacks on the press have been documented. And at least four journalists have been stopped at the border.

This data can be found on the U.S. Press Freedom Tracker, which was launched in early August by CPJ and the Freedom of the Press Foundation. More than two dozen other organizations are also involved in the project. CPJ provided the initial funding. FPF leads the day-to-day operations of the website, with its senior reporter, Peter Sterne, serving as the managing editor.

Alexandra Ellerbeck, CPJ’s North America program coordinator, is also the chair of the website’s steering committee. “By highlighting press freedom incidents that occur in the United States, the tracker will enable the American press to ask questions and hold their government to account,” Ellerbeck said. “American citizens have a right to the truth that comes with a free press.”

The website tracks the arrests of journalists, the seizure of their equipment, physical attacks, border stops, and other incidents. This documentation will inform advocacy, journalism, and legal action.

A week after CPJ called for the release of two Myanmar journalists detained in Bangladesh, they were freed.

Police arrested Minzayar Oo and Hkun Lat in the Bangladeshi city of Cox’s Bazar, where they were reporting for the German magazine GEO on the influx of Rohingya refugees coming from Myanmar, the paper’s deputy editor-in-chief told CPJ. The journalists were charged with “false impersonation” and providing “false information” and were accused of violating immigration rules.

CPJ called the Cox’s Bazar police chief and sent an email to the police station. Both were unanswered.

Then, on September 22, the journalists were released on bail, but were forbidden from going back to Myanmar. CPJ will continue calling on Bangladeshi authorities to drop the charges against them.

CPJ’s South and Central Americas research associate, Natalie Southwick, wrote about how indigenous journalists in Venezuela regularly face harassment, intimidation, detention, and censorship. The coverage of one news outlet in particular, Tane Tanae, has led to clashes with local officials.

CPJ published a statement condemning the murder of Syrian-American journalist Halla Barakat and her mother, an activist, who were found dead on September 21 in their apartment in Turkey. CPJ called on Turkish authorities to hold the killers accountable and ensure the protection of Syrian journalists who have fled to Turkey seeking safety.

A Paraguayan judge ordered the release in September of an alleged drug trafficker who threatened to kill Cándido Figueredo Ruiz, a journalist and the winner of CPJ’s 2015 International Press Freedom Award. CPJ condemned the release in a statement, saying it “only increases the responsibility of the authorities to ensure [the journalist’s] safety and freedom from fear.”

Join us at our 2017 International Press Freedom Awards dinner!

On Wednesday, November 15, CPJ will hold its 27th annual International Press Freedom Awards dinner, which will honor four journalists who have faced harassment, death threats, or imprisonment just for doing their job. CBS News President David Rhodes will chair the dinner, while CNN Chief International Correspondent Christiane Amanpour will be the host of the night.

The 2017 honorees are Ahmed Abba, a journalist imprisoned in Cameroon since 2015; Patricia Mayorga, a Mexican journalist who has received threats in connection with her work; Pravit Rojanaphruk, a longtime journalist and press freedom advocate in Thailand; and Afrah Nasser, a Yemeni journalist and blogger who reports from exile in Sweden.

The 2017 International Press Freedom Awards dinner will be held at the Grand Hyatt (42nd Street and Lexington) in New York. The reception will begin at 6:30 p.m., and dinner will be served at 7:45 p.m. Attire for the event is black tie.

We can’t do it without you

CPJ believes that no journalist should be jailed in retaliation or reprisal for their work. Already this year, our advocacy has helped win the early release from prison of more than 40 journalists from all over the world.

But we can’t do our work without the support from people like you. Your help goes a long way. It supports our programmatic work, like the research and advocacy we carry out in places like Syria, Ethiopia, Turkey, India, and the United States. Your gift also helps us travel on missions, like we did this year to meet with the presidents of Mexico and Ukraine and call on them to successfully prosecute the murders of journalists. Your support also helps us provide assistance to the journalists who need medical care in prison or who have been forced to flee their country to exile.

But sometimes we have to ask you to do a little more.

If you have already made a gift to CPJ, we are deeply grateful for your support. But there’s another way you can help. Sign up today to become a recurring donor. It’s very simple–on our donation page, just click on “Recurring Gift” instead of “One-Time Gift.”

It can be as little as $5, but to us–and the journalists we help–it’ll make a huge difference. Thank you.

“In Cambodia, a crackdown on independent media threatens a respected daily,” NPR

“As Myanmar’s Rakhine crisis deepens, so does state bid for media control,” The Christian Science Monitor

“The murder of an Indian journalist,” The New York Times

“Political reporter beaten to death in north-east India,” The Guardian

“In Mexico, ‘it is the state, not the cartels that poses the biggest threat to journalists’,” Columbia Journalism Review