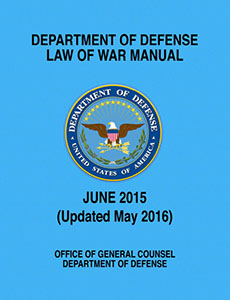 Frank Smyth, CPJ’s security consultant, was stunned when he read the newly released Law of War Manual from the U.S. Department of Defense in June 2015. The manual included language that allowed journalists to be categorized as “unprivileged belligerents,” which would allow military commanders to detain journalists indefinitely outside the rules of war.

“I was shocked that the manual failed to recognize the role and importance of independent reporting, while placing journalists in the same potential category as terrorists, saboteurs and spies,” Smyth said.

CPJ and other press freedom groups widely criticized the manual. Smyth wrote a blog for CPJ, titled, “In times of war, Pentagon reserves right to treat journalists like spies,” in which he said the language used to attempt to justify the categorization of journalists as “unprivileged belligerents” was “weak at best.” In the following months, Smyth and CPJ Deputy Executive Director Robert Mahoney, as well as representatives from other press freedom groups, met with Pentagon officials and advised them on changes to the manual.

Then, in July 2016, the Pentagon issued an updated version. The manual now recognizes the role of journalists to independently report armed conflicts, and arrange meetings or have contacts with different sides, including “enemy personnel.”

“These revisions mark a tremendous improvement,” Smyth said. “The revised manual not only acknowledges the role of independent reporting, but it also recognizes that legitimate journalistic activities may include having contacts with enemy forces for the purposes of reporting.”

On July 25, CPJ staff watched from our conference room as members of the United Nations ECOSOC Committee voted to grant consultative status to CPJ. With consultative status, CPJ will now be allowed to access U.N. bodies and processes, such as the Human Rights Council in Geneva, where accredited NGOs can deliver a counter-narrative to states.

It has been a four-year process. Our application was deferred seven times based on arcane procedure. There were long and sometimes heated debates as to whether civil society representatives should be allowed to speak at designated points throughout the process.

Then, in May, after our application was denied by a vote of the NGO Committee of the United Nations, we began reaching out to several of the countries voting in the committee, calling on them to vote in favor of our application. In mid-July, we joined with more than 50 other free expression organizations to call on members of the ECOSOC committee to grant us accreditation. Christiane Amanpour, CNN’s chief international correspondent and anchor, also sent a letter on CPJ’s behalf, urging ECOSOC members to support our application.

At the vote, 40 members voted in favor of CPJ’s application, five voted against, six members abstained, and three were not present. Click here to see the full list.

Turkish journalist Can Dündar woke up on the morning of July 18 to hear that he had been awarded CPJ’s 2016 International Press Freedom Award. But as the congratulations poured in that day, Dündar, editor-in-chief of the Turkish daily Cumhuriyet, found out he was also on a “blacklist” of journalists slated for arrest in Turkey.

The list was published by an anonymous Twitter user who claimed to have access to inside information and has been naming journalists marked for arrest by the government in coming weeks. Dundar was sentenced in May to five years and 10 months in prison on charges of revealing state secrets, but is free pending appeal.

Being at the top of the list of journos to be arrested in Turkey and awarded by CPJ on the same day?
Wow!
Thanks CPJ https://t.co/uQppd0uacu

Dündar is one of four journalists CPJ is honoring on November 22, 2016, with its International Press Freedom Awards. The others include Mahmoud Abou Zeid, an Egyptian photojournalist also known as “Shawkan,” who has been imprisoned since August 2013; Malini Subramaniam, an Indian freelance journalist who fled her home state after being harassed and threatened; and Óscar Martínez, a Salvadoran investigative reporter for the newsmagazine El Faro, who has been threatened in relation to his coverage of gang violence and extrajudicial killings in the country.

CPJ is also honoring Christiane Amanpour with the Burton Benjamin Memorial Award for her extraordinary and sustained achievement in the cause of press freedom. In 2015, she was named UNESCO’s goodwill ambassador for freedom of expression and journalist safety. Amanpour, who has used her own journalism to defend the rights of journalists and uphold press freedom all over the world, is a senior adviser at CPJ.

CPJ’s 2016 International Press Freedom Awards dinner will be chaired by Jeff Zucker, president of CNN Worldwide. The benefit will be held at the Waldorf-Astoria in New York City, on November 22, 2016. To buy tickets for the benefit dinner, call CPJ’s Development department at (212) 300-9021. For more information on reserving a table, click here.

This month, CPJ mourned the death of Pavel Sheremet, journalist for the independent news website Ukrainska Pravda, who was killed in a car bomb in Ukraine. CPJ honored Sheremet in 1998 with an International Press Freedom Award. The day after his death this July, Ann Cooper, CPJ’s former executive director, wrote a blog post for CPJ, “Remembering Pavel Sheremet, IPFA honoree, friend to CPJ, and hard-nosed journalist,” accompanied by the above video, in which she paid tribute to Sheremet, and called on Ukraine’s leaders to bring his killers to justice.

In the run-up to the U.S. political party conventions this year, Frank Smyth, CPJ’s senior adviser for journalist security, published a blog post for CPJ, “Be prepared: Steps to staying safe while covering US political party conventions.” At both conventions, he wrote, “the press is likely to come across special interest and rights groups protesting. … This makes for an unpredictable, potent mix for journalists covering the conventions.” Smyth then recommends a few steps that journalists should take, including tips such as “work in teams,” “identify yourself as needed,” and “do not respond to provocation.”

CPJ’s Mexico correspondent, Jan-Albert Hootsen, in July wrote a blog post about Oaxaca, Mexico, where members of a dissident teachers’ union are clashing with federal and state police. For the blog, called “In Oaxaca, reporters covering teachers’ union protests face violence, threats,” Hootsen interviewed individuals who told him they didn’t want state media covering the issue as “they only tell the official version of the story.” The blog post is accompanied by a slideshow.

In Kazakhstan, journalist released from prison

In mid-July, a Kazakh court converted the 18-month prison sentence of a journalist to a suspended term and ordered her to be released from prison immediately.

Guzyal Baydalinova, editor of the independent news website Nakanune, was convicted in May of deliberately distributing false information. The conviction was in connection with reports published in Nakanune about Kazkommertsbank, Kazakhstan’s largest bank. A few days before the journalist was arrested in December, police searched her apartment and that of a colleague, as well as the Nakanune newsroom, and confiscated reporting equipment and financial records.

Kazkommertsbank suffered financial losses in 2015, and has been struggling due to bad loans and because of a weak exchange rate for the local currency, according to Reuters. The bank says it has no liquidity problems, Reuters reported.

Baydalinova heads one of a handful of publications in Kazakhstan that are still critical of the policies of President Nursultan Nazarbayev and his government. Nakanune was founded by Baydalinova and journalists from the independent news websites Respublika and the Assandi Times, which were were banned by Kazakh authorities in 2012 and 2014 respectively, for being “extremist,” according to news reports.

Kyrgyzstan: Askarov given appeal hope but remains in jail

The Chinese government has banned news operations by internet companies

The unexpected life and death of Abdel-Kader Fassouk