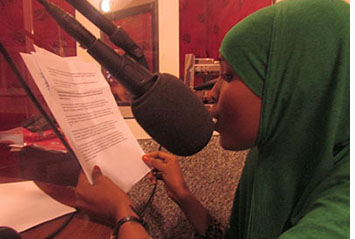 President Barack Obama hosted the first US-Africa Leaders Summit in Washington D.C. this month. The discussion focused on trade and investment, but CPJ helped put press freedom on the agenda. At a time of unprecedented growth and change in Africa, journalists are under increasing pressure, with spikes in repression from Ethiopia to Nigeria.

CPJ co-hosted a panel discussion with the Robert F. Kennedy Center for Justice and Human Rights on press freedom in Africa, introduced by CPJ board member Clarence Page. Page wrote a syndicated column framing freedom of the press and free speech as an economic development indicator. CPJ also published a blog drawing on the panel discussion and underlining its concerns about the lack of a human rights agenda at the summit. During the summit CPJ participated in the Civil Society Forum Global Town Hall with Vice President Joe Biden and Secretary of State John Kerry.

CPJ’s message was carried by a number of prominent newspapers, including the Miami Herald, in which an op-ed by Africa Program Coordinator Sue Valentine appeared. The Houston Chronicle also ran a piece about press freedom in Ethiopia, and The Washington Post echoed CPJ’s calls for greater openness.

Even President Obama had something to say on press freedom: “Good governance means everybody has a voice, that government is transparent and, thereby, accountable. And even though leaders don’t always like it, the media plays a crucial role in assuring people that they have the proper information to evaluate the policies that their leaders are pursuing.”

Following the arrest last month of Washington Post correspondent Jason Rezaian and his wife Yeganeh Salehi, who is also a journalist, Iran has drawn international condemnation. In order to shed light on the deteriorating situation there, CPJ ran a social media campaign in July that “live tweeted” major events in the Iranian crackdown in 2009, and drew conclusions on its consequences for Iranian journalists today.

This month, CPJ featured a guest blog by Roxana Saberi about the role international pressure can play in the release of Rezaian and Salehi. In 2009, Saberi was detained in Iran for 100 days while working as a freelance journalist.

In welcome news, Iran released Saba Azarpeik, an Iranian journalist who was arrested on May 28, 2014. Azarpeik’s mother posted a photo of her daughter’s return home on her Facebook page on August 21, 2014.

According to CPJ research Azarpeik, a journalist with the weekly Tejarat-e Farda and daily Etemad, was arrested previously in 2013, and often writes critically about conservative officials and human rights abuses in the country.

CPJ research indicates that Iran and China remain the leading jailers of journalists, with about 35 journalists imprisoned in each country.

Critical Omani blogger Muawiyah Alrawahi, who disappeared in July after being summoned by Intelligence Officers, was released on August 11 and is writing blog posts again. Photos of the journalist in chains at the psychiatric department of Sultan Qaboos University Hospital in Oman surfaced after his disappearance.

CPJ Executive Director Joel Simon noted in a blog recently, “Repressive governments are recognizing that the Internet is no longer the province of the connected elite. It’s a form of mass communication which, when unfettered, presents a threat to centralized power and control.”

On August 14, the petition “We Support James Risen Because We Support a Free Press,” which had more than 100,000 signatures and was supported by CPJ, was delivered to the U.S. Department of Justice. Later that day, CPJ Advocacy Director Courtney Radsch was among seven representatives from free press organizations who announced the delivery of the petition during a press conference about efforts by the Obama administration to compel New York Times reporter James Risen to disclose a confidential source. The petition was initiated by the Institute for Public Accuracy and RootsAction.org.

CPJ was awarded the 2014 First Amendment Award by the Association for Education in Journalism and Mass Communication at its conference in Canada. CPJ Executive Director Joel Simon accepted the award during the conference in Montreal on August 7.

CPJ staff were devastated to hear this month of the murder of photojournalist Jim Foley. His death was personal for many here who knew him and helped advocate for his release when he was held captive in Libya in 2011. CPJ will always remember Jim Foley.

CPJ staff are deeply moved by the contributions received in the wake of Foley’s murder. Al-Jazeera journalist Mohamed Fadel Fahmy, who is currently imprisoned in Egypt, reached out to CPJ through his brother in order to make a donation.

These donations are going to CPJ’s Gene Roberts Emergency Fund, which is used to dispense grants to journalists in distress worldwide.

Your gift can go even further! Choose the “recurring gift” option on the donation page and your monthly gift will help protect journalists who face persecution for their work.

Two years and no word of Osama al-Habaly

Ethiopia and its press: The noose tightens

From Missouri to Syria, Journalists Are Becoming Targets

James Foley is a reminder why freelance reporting is so dangerous