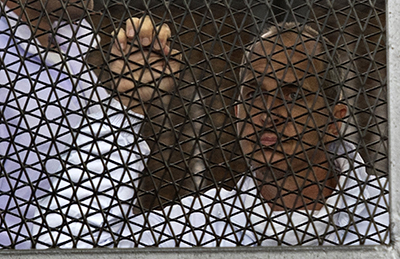 In the lead-up to World Press Freedom Day, CPJ has started a campaign highlighting 10 emblematic cases of journalists in prison and calling on authorities to release them and all other reporters being held in relation to their work. CPJ believes that no journalist should be imprisoned for doing their job.

You, too, can add your voice. Join CPJ in calling on authorities in repressive countries to #FreeThePress and release all journalists held for no other crime than covering issues in the public interest.

Targeted murders of journalists in Syria landed the war-torn country for the first time on CPJ’s Impunity Index, a ranking of countries where journalists are murdered regularly and their killers go free. The Index, which was released this month, was turned into an infographic by the Guardian Data Blog.

While CPJ research shows that Syria is still the most dangerous country in the world for journalists, Iraq still tops the Index. Nine journalists were murdered with impunity in 2013, bringing to 100 the number of unresolved murders in Iraq in the past decade.

Syria and Iraq join Somalia, Sri Lanka, Mexico, and others on the list of countries where journalist murders are not punished. But there was some good news as well: In recent months, four countries on the Index–Philippines, Pakistan, Russia, and Brazil–achieved at least one conviction in a journalist murder case.

In November, the United Nations passed a resolution on the safety of journalists and issue of impunity, setting November 2 as the “International Day to End Impunity for Crimes Against Journalists.”

CPJ is planning a mission to Kurdistan following the release of its report, “Mountain of impunity looms over Kurdistan journalists.” The report, whose launch at the National Press Club this month was widely covered by regional media outlets, found that the Kurdish press is vulnerable whenever internal political tensions flare. In response to impunity for anti-press attacks, including murder and arson, the report found, journalists are forced to self-censor on topics associated with powerful officials.

The report also included recommendations for the Kurdish Regional Government, the leaders of Kurdish political parties, and the international community.

CPJ met in Washington with officials from the Iraqi Kurdistan region, who promised to arrange meetings between CPJ and senior government officials.

CPJ participated in a global effort to win the release of an international journalist in Ukraine this month. CPJ issued a statement and alert on Simon Ostrovsky’s capture and spoke with the spokeswoman of the group holding him in custody.

On April 23, CPJ Europe and Central Asia Researcher Muzaffar Suleymanov called Stella Khorosheva–spokeswoman for the self-declared mayor, Vyacheslav Ponomaryov, who had earlier confirmed he was holding Ostrovsky captive. Khorosheva told Suleymanov that Ostrovsky was detained by military units on suspicion of carrying out subversive activities and of covering the situation in Sloviansk from only one side. She said the journalist had not been charged with a crime and that he was “safe, alive, well fed, and working on an exclusive story” in detention.

Suleymanov reminded Khorosheva that Ostrovsky was a journalist–not a criminal–and should be released. She said Ponomaryov had vowed to release Ostrovsky “when the time comes.” The journalist was released the next day and thanked news outlets for their support.

With Birsin’s release and the releases reported last month, the number of imprisoned journalists in Turkey has nearly halved from the 40 jailed reporters CPJ documented in its most recent prison census. Today, China and Iran are the leading jailers, with each country holding about 35 journalists, according to a recent CPJ estimate.

Birsin had served five years in jail, the maximum allowed without conviction, according to the newly amended anti-terror law. Birsin’s release is conditional–he can be imprisoned again if he is convicted. His trial is ongoing. He has been charged with assisting an offshoot of the banned Kurdistan Workers Party, or PKK, attending PKK events, possessing PKK documents, and assisting the PKK in its press work, according to Turkish Justice Ministry documents.

Defending the press in Vietnam

On April 29, CPJ Asia Program Coordinator Bob Dietz testified on media freedom in Vietnam to the U.S. House of Representatives in Washington. CPJ research shows that Vietnamese authorities have intensified their crackdown on bloggers, who represent the country’s only independent press.

“The clampdown dates back to 2008, when the government began to suppress independent bloggers in a bid to bring the Internet under the same strict regulations and controls that are used to censor and guide the mainstream media,” said Dietz at the hearing. “Still, the number of politically oriented bloggers has grown alongside the country’s fast-rising Internet penetration rates, estimated by government figures at about 40 percent of the population.”

CPJ honored Vietnamese blogger Nguyen Van Hai with its International Press Freedom Award  in 2013. CPJ is holding the award until Hai is released from prison and can claim it in person. Hai is serving a 12-year prison sentence and five years of house arrest under a vague law that bars “conducting propaganda” against the state. He is currently the longest jailed blogger in Vietnam.

CPJ partnered with Reporters Without Borders this month to launch Bahrain Racing in Circles, a social media campaign promoting press freedom in Bahrain during the April 6 Formula One Race. The campaign was organized through Thunderclap, a social network that schedules thousands of tweets and Facebook updates to post automatically at a predetermined time.

CPJ surpassed its goal of reaching an audience of 1.3 million people–one for every person in Bahrain–and instead reached 4.36 million people. CPJ strengthened both our national and international networks and attracted notable participants, including Juan E. Méndez, the U.N. special rapporteur on torture and other cruel, inhuman or degrading treatment or punishment, as well as major human right organizations.

The campaign, which was timed to the starting gun of the Formula One race, used the hashtag #F1 and the message, “Whether they cover changing tires or burning tires, journalists must be allowed to work freely in Bahrain.” Buzzfeed and Reuters reported on the campaign.

In a letter this month to the co-chairmen of the Open Working Group on Sustainable Development Goals, CPJ called for freedom of expression and access to information and independent media to be part of the post-2015 agenda. The working group will help frame the discussion as U.N. member states seek to agree on a set of objectives to succeed the Millennium Development Goals.

The letter was sent to over 80 permanent representatives to the United Nations to gain their additional support.

CPJ Deputy Director Robert Mahoney wrote an essay for CPJ’s annual publication, Attacks on the Press, and is leading CPJ’s efforts to ensure that freedom of expression and access to information are part of the post-2015 agenda.

CPJ welcomes Alan Rusbridger, editor of the Guardian, to its board of directors and Courtney Radsch as the organization’s Washington-based advocacy director.

Your gift can go even further! Choose the “Recurring gift” option on the donation page and your monthly gift will help protect journalists who face prosecution for their work.

CPJ will be at the New America Foundation in Washington on May 1 for an event on Pakistan called “Reporting in Pakistan: Protecting Journalists in One of the World’s Most Dangerous Countries. CPJ Board Member Kati Marton, CPJ Executive Director Joel Simon, and senior Pakistani journalist Raza Rumi will discuss the situation for journalists in Pakistan and the work CPJ is doing to protect them. Join the conversation online using the hashtag #PakPress.

On May 2, CPJ is participating in a World Press Freedom Day event hosted by the International Peace Institute, UNESCO, and the Permanent Mission of Greece to the U.N. The panel will include CPJ Executive Director Joel Simon, Reuters journalist David Rohde, UNESCO’s Suzanne Bilello, and Colombian journalist Maria Cristina Caballero.

On May 6, CPJ will release a report on the climate of press freedom in Brazil as the country gears up to host the World Cup this summer, followed by the Olympics in 2016. The report, “Halftime for the Brazilian press,” will be launched in Brasília at the Brasilia Forum on Freedom of Expression and Democracy.

In Bangladesh, journalist summoned for criticism of court

Trials, not tribunals, needed in Pakistan

Censorship in India on the rise amid elections

Should the EU Punish Propagandists?

Joint statement issued at the BBC’s Safety of Journalists Symposium

Fighting for the Right to Free Speech