News from the Committee to Protect Journalists, February 2012 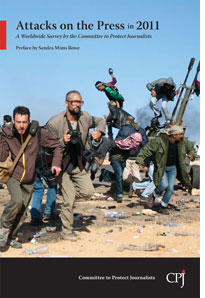 ‘Attacks on the Press’ launched

Repressive governments, militants, and criminal groups across the globe are leveraging new and traditional tactics to control information and obscure misdeeds, silence dissent, and disempower citizens, according to Attacks on the Press, CPJ’s yearly survey released on February 21, available here. The 2012 release marks the first year that the report’s findings are presented with enhanced interactive features in the online version.

This year’s report assessed press freedom in more than 100 countries and found that in the Arab world, journalists face unpredictable new threats, and in Asia, intimidation has a chilling effect. In Africa, investigative reporting is considered a threat to development, and in Latin America, state media serves as a politicized weapon against the independent press. Worldwide, Internet crime laws continue to put journalists in peril.

Regional sections of Attacks on the Press are available in Arabic, Chinese, French, Portuguese, Russian, and Spanish.

For the global launch of the report, CPJ held a press conference in Cairo, with approximately 30 journalists in attendance, and a live streaming panel at the Frontline Club in London-which included CPJ Executive Director Joel Simon, Colin Pereira, head of safety and security at ITN, and Iranian-Canadian journalist Maziar Bahari. CPJ also received a substantial amount of media attention for the report, including an appearance by Simon on the acclaimed BBC World radio show World Have Your Say.

CPJ will be hosting several regional events in the coming months to create awareness of the report’s findings and engage in discussions about the best ways to promote free expression.

In 2009, Kassahun Yilma, a reporter for the independent publication Addis Neger, fled Ethiopia after receiving threatening messages from authorities. He spent more than two years in exile in Kenya. CPJ’s Journalist Assistance Program worked tirelessly with other international press freedom groups to support and advocate on his behalf, and in late January 2012, Kassahun and his wife arrived in the United States, where they were granted asylum.

On February 22, CPJ Senior Americas Program Coordinator Carlos Lauría participated in a panel at the Forum on the Freedom to Communicate , hosted by the Aspen Institute and held in Mexico City. At the event, which aimed to enhance press freedom in the country, Lauría spoke of the threats to the Mexican press and its implications on democracy.

Earlier in the month, CPJ Mexico Representative Mike O’Connor spoke on a panel at the premiere of the documentary Reportero in Mexico City. Reportero tells the story of veteran Mexican journalist Sergio Haro and the newsweekly Zeta in Tijuana, one of the only publications investigating organized crime and corruption in Mexico’s northern states, where self-censorship is rampant. In 1996 and in 2007, Zeta journalists were honored with CPJ’s International Press Freedom Award for their courageous work.

The Reportero screening also marked the launch of a CPJ-sponsored petition that calls on the Mexican Senate to approve a long-stalled bill that would federalize anti-press crimes. The petition will be circulated at screenings throughout Mexico as the film travels the country with the Ambulante Film Festival, before premiering in the U.S. on PBS this fall.

CPJ documented the first instance of journalists being arrested since the regime of Tunisian President Zine El Abidine Ben Ali was overthrown last year. A director and two journalists of the country’s national daily, Attounissia, were arrested on February 16 on charges of disrespecting public morality. On the day of his arrest, CPJ called upon the Tunisian authorities to release all of the detainees. On February 23, the director, the last of the journalists, was freed.

CPJ has assisted and advocated for Jean Bosco Gasasira, a journalist for the Rwandan Umuvugizi news site, since 2007 when he was attacked for reporting critically on the Rwandan government. Gasasira finally came out of hiding this month, and CPJ’s East Africa consultant, Tom Rhodes, reported on the breaking news.

At CPJ, we categorize China along with countries like Iran,  Eritrea, Ethiopia, Vietnam, and Syria as the world’s leading jailers of journalists , and we thought it imperative to spread the word. Ahead of Chinese Vice President Xi Jinping’s meeting at the White House this month, CPJ sent a letter  to U.S. President Barack Obama, asking that he raise the issue of China’s imprisonment of journalists, the restrictions on access for journalists to areas of ethnic and civil unrest, and the heavy-handed approach in controlling the country’s increasingly dynamic mainstream media.

As the U.S. continues to enhance its relations with China, it is vital that media freedoms and journalists’ rights remain in the forefront of the agenda.

On March 2, CPJ Executive Director Joel Simon will participate in an expert panel at Cambridge University on the international efforts to protect journalists at risk. Simon will be joined by Christof Heyns, the U.N. Rapporteur on the right to extrajudicial, summary, and arbitrary executions, and Frank La Rue, the U.N. Rapporteur for freedom of expression. The panel will discuss the limits of press freedom in this new and evolving world.

CPJ will continue to promote the newly released Attacks on the Press at regional events around the world in the coming months. First stop is Sinaloa, Mexico, where CPJ will co-host a panel discussion on March 6 with Ríodoce, a weekly covering crime and corruption in Sinaloa, focusing on the problems facing local news outlets in Mexico.

In May, CPJ will release an updated version of the CPJ Journalist Security Guide, which will offer guidelines for basic preparedness for journalists around the world and advice on complex issues such as digital security and threat assessment for journalists of all experience levels. This way, local and international journalists everywhere can be informed of ways to stay safe while on assignment. Details about the launch event will be announced on our events page.

In Ecuador, a crushed and silenced democracy

Ekho Moskvy board shuffled ahead of Russian election