My role has changed. Over the past decade, I handled both Washington advocacy and journalist security issues for CPJ. Now I focus exclusively on the latter. Today’s entry is the first in what will be a regular look at the dangers journalists face worldwide and the resources available to address those risks. How to Avoid Being Killed in a War Zone is one such resource, a war correspondent’s survival guide published in 2011 that offers fresh, reported, and at times irreverent advice.

The author is Rosie Garthwaite, a 31-year-old Al-Jazeera producer and former British Army “gap year officer” who has also reported for Reuters, The Times, and the BBC.  Garthwaite draws upon her own experiences and interviews dozens of seasoned colleagues to produce an ambitious 300-page volume that blends verve and practicality. 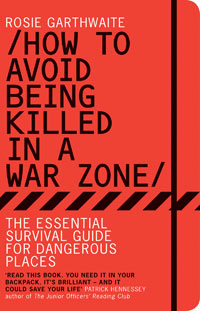 How to Avoid Being Killed in a War Zone speaks in Garthwaite’s confident voice. “My personal phobia in hotel rooms is cockroaches. I once found five on my bed in a shockingly bad hotel in southern Nepal,” she notes. The solution? “I took two sarongs from my bag, swept the roaches off my pillow and made myself a stripy head-to-toe shroud to keep ’em out till morning,” she adds. “Sarongs are a key piece of kit.”

Garthwaite aptly covers several tough dilemmas such as whether a foreign journalist should attempt to blend in or not. “My advice would be that if you can blend in, then try to do so, especially for one-off encounters, such as checkpoints, or traveling on public transport,” she suggests. “But if you are staying for a while, blend in only out of respect for the local culture, not to hide. In the long run, you will be found out.”

She refreshingly makes no attempt to resolve matters over which journalists themselves disagree. The BBC’s John Simpson recommends about demeanor and profile: “Act naturally, don’t allow yourself to be scared; be friendly, look people in the eye and never, ever try to pretend you’re not who you are.” Former journalist and now counter-terrorism expert James Brandon says something else: “Remember that disguises that work in one part of the world won’t work in another.”

Some journalists might quibble with the author’s disregard for rules and failure to clarify boundaries. She relies on the advice of experts such as her university pal Patrick Hennessey who became “the youngest captain in the British Army” and a bestselling author. “I [later] found myself ambushed on patrol, only this time as a freelance journalist embedded with my former comrades,” he recalls to Garthwaite. “One thing, however, was worryingly different, and that was having a camera in my hands instead of a rifle. It was the most naked and useless I’ve felt in a long time.”

Some advice in the book is invaluable, such as maintaining regular contact with someone outside the conflict zone. “The call-in should be a rigorous procedure–according to area or threat–every three or six hours,” notes Chris Cobb-Smith, a former British military officer and media adviser. “In the event that the call is not received, the procedure should be equally rigorous: no call for an hour–alert people that there may be a problem; no call for two hours–start emergency procedures.”

Elsewhere the guide seems a bit breezy on basic preparation. “I have no fluent languages other than English, but all around the world there is a common language of humanity,” Garthwaite says. “You just have to learn the local dialect of body language and your message will be a lot clearer.” She emphasizes the importance of bringing a phrase book in the local language. “It needs to show how it is written, not just how it sounds to your ear. That way you can point to phrases or words in the book if local people don’t understand what you are saying.” The book steps over how to hire a translator, although it discusses how to choose a local driver.

The guide quotes a number of experienced journalists about what they personally would bring into the field. “Camelbak-style water container. Torches with plenty of batteries for when the electricity is down,” recommends Leith Mushtaq, a senior Al-Jazeera cameraman. “Army tourniquet, clean needle, antiseptic, water purification tablets and portable chess set, ” says journalist and author Sebastian Junger.

Some readers might question other suggestions. Garthwaite offers, for example, some tips on how to hot-wire a car–noting the risk of a “big electric shock if you get it wrong.”

And one source recommends a strategy certain to prompt debate. “When it comes to getting that last seat on a plane, girls should wear a short skirt or deep v-neck–if dealing with disciplined soldiers,” says Samantha Bolton, the former head of press and advocacy for Médecins Sans Frontiéres. “Be friendly, polite and respectful with others. Offering corporate gifts, pens or trinkets also helps. This last one is more for getting through roadblocks. Medicine too is always in demand–antibiotics, antiseptic, painkillers. And, of course, cigarettes.”

The guidebook very briefly deals with subjects like how to avoid rape, how to evade surveillance, and where to sit on a dodgy plane. Much space is devoted to comprehensive, step-by-step instructions replete with how-to diagrams on specific, challenging tasks: how to perform CPR on an adult or child; how to apply a tourniquet; how to catch, gut, and cook a fish; how to snare or trap game; how to deal with environmental hazards from trench foot to frostbite; how to handle, just in case, pistols as well as rifles, how to exercise in hotel rooms, how to execute basic maneuvers in self-defense, how to handle being kidnapped, and how to recognize and cope with emotional trauma.

When was the last time a cut-off journalist survived by living off the land? Most experts in many of the other fields maintain that to safely or effectively learn such tasks requires at least some training.

But there is no doubt about one thing. The book, subtitled The Essential Survival Guide for Dangerous Places, covers myriad threats and potential responses. “You need to take control of your own destiny,” urges Garthwaite. “Don’t go along for the ride.”