News from the Committee to Protect Journalists, April 2011 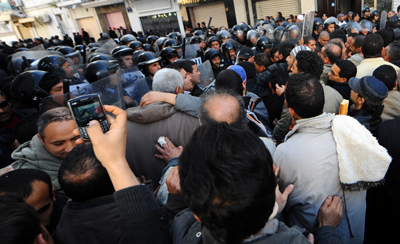 Digital frontiers and beyond

To mark World Press Freedom Day 2011, CPJ will publish “The 10 Tools of Online Oppressors,” a special report on the most threatening tactics to suppress online journalists and bloggers as well as the countries making exemplary use of these censorship tools. The report will be published on www.cpj.org on May 2.

CPJ Internet Advocacy Coordinator Danny O’Brien, who authored the report, will join “Censorship Without Borders,” a panel discussion about new technologies and the spread of online censorship tools to be held in Washington as part of a global conference commemorating World Press Freedom Day.

CPJ will be active worldwide on May 3: CPJ representative Mike O’Connor will speak in Mexico City on mobilizing against impunity, and in Brussels, CPJ Senior Advisor Jean-Paul Marthoz will participate in a public hearing by the European Parliament regarding the protection of journalists. Other activities include a talk by Middle East and North Africa Program Coordinator Mohamed Abdel Dayem at the Yahoo Business and Human Rights Summit, and a two-day conference in Nairobi in which East Africa Consultant Tom Rhodes will take part.

Also on May 3, the CPJ blog will feature pieces on the attempted censorship a Burmese website and a first-person piece by an Egyptian blogger who has faced threats and retribution for her work.

Since political unrest began to spread across the Middle East and North Africa in January, CPJ has documented more than 450 attacks on journalists. Twelve journalists have been killed in the region, while dozens have faced assault and detention.

In Libya, the chaotic nature of the conflict has proven to be a challenge for media covering events on the ground. In Tripoli, the press has been shepherded around by government minders who, in essence, controlled their ability to report. Militias and government authorities have detained journalists, held them incommunicado and brutalized some while in detention.

Four journalists have died in Libya this year, including Tim Heatherington and Chris Hondros, who were killed in an explosion. To date, 17 journalists are missing or in detention in the country. CPJ has documented more than 80 attacks on the press since political unrest erupted. These include fatalities, numerous injuries, 49 detentions, 11 assaults, two attacks on news facilities, the jamming of two international television transmissions, at least four instances of obstruction, the expulsion of two international journalists, and the interruption of Internet service. At least six local journalists are missing amid speculation they are in the custody of security forces. One international journalist and two media support workers are also unaccounted for.

CPJ has called on the government to fully investigate the deaths of two journalists in custody in Bahrain: The founder of the country’s premier independent daily, Al-Wasat, died in state custody mid-April, following the death, also in state custody, of a blogger accused of disseminating false news and inciting hatred. The newspaper has been accused of “deliberate news fabrication and falsification” and the government announced that it will file criminal charges against three of the paper’s senior editors. Two other senior staffers were deported.

In Yemen, beatings and detentions are part of the daily risks and particularly worrying is the case of a journalist summoned by the authorities who disappeared without a trace in mid-April.

Authorities in Syria have sealed off various cities, making it virtually impossible for journalists to cover uprisings there. Restrictions have been coupled with a crackdown on those who are reporting, phone service and Internet access have also been interrupted.

Journalists, bloggers, and writers have disappeared or been detained in China since February, when anonymous calls for anti-government protests appeared online. Even the disappearance of famous artist and documentary filmmaker Ai Weiwei, whose whereabouts remain unknown, has gone virtually uncovered by domestic media.

As part of overall efforts to continue advocating for imprisoned journalists in China, CPJ called on the United States and the European Parliament to speak out on the most recent abuses. EU foreign policy chief criticized the Chinese crackdown and specifically referred to journalists. The US has also protested the detentions.  China is tied with Iran as the world’s worst jailer of the press, with 34 journalists behind bars, according to CPJ’s 2010 census.

Critical reporting on the case of a British exchange student who was murdered in Italy has set off an alarming wave of threats, harassment, and intimidation by local authorities, who have obstructed news coverage in Italy and the United States.  American student Amanda Knox, is a defendant in the case.

In a letter to Italian President Giorgio Napolitano, CPJ outlined attempts to muzzle reporting and opinion around the official investigation into the 2007 case. The letter is issued ahead of the May trial of local freelance reporter Frank Sfarzo, for alleged police contempt and aggression. Sfarzo faced intimidation for two years after his public criticism of the Meredith Kercher murder investigation.  CPJ’s letter urged Napolitano to “ensure that reporters and writers are not afraid to cover, comment on, and criticize the activities of Perugia authorities.” CPJ is especially concerned about the history of anti-press actions by public prosecutor Giuliano Mignini, who heads the Kercher investigation and has filed or threatened to file criminal lawsuits against journalists or media organizations on both sides of the Atlantic.

Freedom and harassment in Cuba

In early April, Cuban authorities put an end to a dark era by freeing its last journalist behind bars. The release of Albert Santiago Du Bouchet Hernández represents a milestone in an intensive, international advocacy effort led by the Catholic Church, the Spanish government, and international press and human rights groups, including CPJ.

Nonetheless, the struggle for press freedom on the island is far from over. The Communist Party Congress in late April brought economic reforms but no easing of restrictions on the press. Instead, at least 10 correspondents from Hablemos Press, known for its reporting on human rights and opposition activities, were detained in police stations, put under house arrest, or threatened with arrest in the weeks leading up to the congress.

In addition to advocating for the freedom of imprisoned Cuban journalists over the last seven years, CPJ has published the blog series “After the Black Spring” where several released journalists guide readers through their darkest hours and the trials of a newfound freedom.

When Ukrainian journalist Georgy Gongadze was found beheaded after disappearing in Kiev 11 years ago, CPJ took up his case and advocated for justice. There is finally some movement in the murder case of Gongadze, whose website often featured articles about President Leonid Kuchma and other Ukrainian government officials. At the end of March, Ukrainian prosecutors indicted former President Kuchma on abuse-of-office charges in connection with the slaying. If convicted, the former president faces up to 12 years in jail. Kuchma has denied involvement into the murder. Lingering suspicions fueled a long-running effort by Gongadze’s family, along with local and international press groups, to urge Ukrainian officials to carry out a full investigation.

“We welcome the long-overdue indictment of former President Kuchma in the brutal slaying of Georgy Gongadze and call on Ukrainian authorities to ensure full justice in this landmark case,” said Nina Ognianova, CPJ’s Europe and Central Asia program coordinator, who has been working on the case for seven years. “A conviction of Kuchma as the mastermind will be a sure sign that justice is possible and truth shall prevail.”

Film screening: CPJ has teamed up with Human Rights Watch for the New York premiere of “IMPUNITY,” a documentary about the search for justice in Colombia. The film will be followed by a Q&A with filmmaker/journalists Hollman Morris and Juan José Lozano. Showings are on: June 22 at 6:30 p.m., June 23 at 9 p.m., and June 24 at 4 p.m. at the Film Society of Lincoln Center’s Walter Reade Theater. Through a series of testimonies, footage of paramilitary crimes, and interviews with victims and experts, the brutal history of paramilitary violence comes to light. Click here for more information. Tickets will be available starting May 16.

Best of the CPJ Blog

Tribute to Chris Hondros, who ventured far with his torch

Anti-press violence in Iraqi Kurdistan, past and present

Assistant Advocacy Director Magnus Ag is a New York-based human rights advocate and journalist. Prior to joining CPJ in 2010, Ag worked as head of section in the Danish Ministry for Science, Technology, and Innovation. He holds a bachelor’s and a master’s degree in political science from the University of Copenhagen. He speaks English, Danish, and Norwegian. Contact him here or follow him on Twitter @AgMagnus.