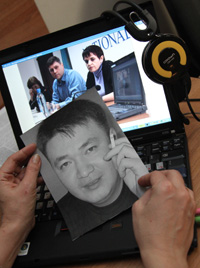 Colleagues said Thursday that Moldashev had disappeared, days after being assaulted and shortly before the country’s presidential election.

“We are gravely concerned about the health and well-being of Daniyar Moldashev and call on Kazakh authorities to positively determine his whereabouts and ensure his safety,” CPJ Europe and Central Asia Program Coordinator Nina Ognianova said.

“The timing of Moldashev’s disappearance–days before Kazakhstan’s presidential vote on Sunday–and the disturbing circumstances surrounding it must be thoroughly investigated,” Ognianova added

Moldashev’s colleagues said the director was last heard from when he contacted his deputy, Guzyal Baidalinova, via Skype on Monday morning. In a Skype message, Moldashev told Baidalinova that he was recovering at home, having sustained a concussion and a broken arm in a Saturday attack, Respublika Deputy Editor Oksana Makushina told a press conference in Almaty on Thursday.

The editor said Moldashev had traveled the previous Friday to Russia to meet with Respublika‘s Moscow correspondents. Moldashev was in Moscow only for the day and carried back business documents and a camera that Respublika’s headquarters had sent to Moscow for repairs, Makushina told CPJ.

Respublika‘s Moscow correspondents told the press conference via video link that they had noticed Moldashev was being followed throughout his Moscow stay by at least three unknown men, using separate cars. The correspondents showed photographs they had taken of the men and reported their license plate numbers.

Moldashev flew out of Moscow on Friday night, March 25, and arrived back in Almaty on Saturday morning, Respublika reported. On the way back home from the airport, Respublika said citing Moldashev’s account, unknown assailants accosted Moldashev and seized the documents and camera. According to the Skype message he sent Baidalinova on Monday, Moldashev reported the attack to Almaty police. When the newspaper tried to reach Moldashev by phone Monday evening for an update, he was unreachable.

Moldashev remained unreachable throughout the next day, prompting Respublika journalists to go to his home on Tuesday evening to check on him. No one answered the door, Makushina told CPJ. “At that point, we were alarmed,” Makushina said. On Wednesday, she and her colleagues sent out a statement of concern that Moldashev had disappeared.

On Wednesday evening, Baidalinova received a mysterious phone call, Respublika said. A man who claimed to be Moldashev told her that he was in Minsk, Belarus, but before she was able to ask questions, the man hung up. “It was a strange phone call,” Makushina told CPJ. “No phone number appeared on Baidalinova’s caller ID and the voice was tense.” Makushina told CPJ it was unusual that Moldashev had not informed his colleagues of a planned trip. “It is strange that a man who was unwell–had recently suffered a concussion and was in a cast–would suddenly take off on a trip to Minsk and not tell anyone,” Makushina told CPJ. She said the newspaper had contacted Moldashev’s family, who told Respublika they also did not know where he was.

Almaty police appeared to sow confusion on Thursday. As Respublika was holding its press conference, police distributed a press release asserting that Moldashev had not disappeared. Contrary to Respublika’s reporting, police claimed Moldashev had contacted his family on Wednesday to say he was going to Kyiv, Ukraine, for personal reasons. Police denied that Moldashev had reported the Saturday attack and robbery.

Makushina told CPJ the police statement has deepened concerns in the newsroom about Moldashev’s well-being.

“History shows that harassment on our newspaper grows every time before elections,” Makushina said. On Sunday, incumbent Kazakh President Nursultan Nazarbayev will be nominally challenged by three opponents. He is expected to win.

As recounted in CPJ’s 2010 special report on Kazakhstan’s record of press repression, Respublika staff have endured severe intimidation, death threats, physical attacks, politicized audits, and politically motivated prosecution over the past decade. Authorities have squeezed printing facilities and distributors to the point where staff are forced to produce the paper on office equipment and hand it out themselves. Respublika‘s website is blocked in Kazakhstan, so content can only be accessed through proxy servers and via social networks such as Facebook and Twitter.