Last week, Google published its first set of global government request statistics, showing how many demands it receives to remove content from its servers or hand over private information on its users. Transparency by Internet companies about how much information they are compelled to remove or release helps us understand how online journalism worldwide may be affected by state actions. Although Google acknowledges its initial figures are “imperfect,” they are an important first step, not least because they might encourage other companies to provide the same figures.

But what can we learn from the appearance of certain countries in Google’s tables? In particular, what of Brazil, which currently tops both data request and content removal charts for the sheer number of requests? Are Brazilian online journalists, their sources, and the availability of their work at greater risk of censorship and exposure than elsewhere in the world?

Not necessarily–but the reasons point to subtler ongoing threats to Brazilian online journalism. And new developments in Brazil’s Internet policy signal a far more worrying potential future: If a new Internet bill is adopted in its current form, Brazil might drop from the Google charts only to leap up the tables of real dangers to online journalism.

At first glance, the Google data, as published on its Web site, certainly don’t look good for Brazil. Google says it received over 50 percent more requests from Brazilian authorities for content to be removed than those of the next highest country, Germany. Brazil also beat out second-place United States in personal data requests, despite having only 72 million Internet users in 2008 compared to the 230 million in the States. 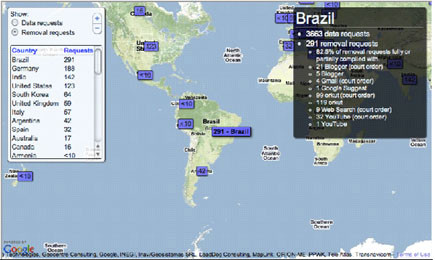 The opportunity for litigants to swiftly challenge content and reveal anonymous sources has long affected the work of journalists in Brazil. CPJ’s research has shown that criminal and civil defamation lawsuits against the Brazilian media have numbered in the thousands over the last five years. As CPJ reported in Attacks on the Press in 2009, one congressman, Edmar Moreira, filed more than 44 suits against at least 38 journalists. Lower court judges routinely interpret Brazilian law in ways that restrict press freedom. On the Internet, courts have ordered Web sites to remove stories on judicial corruption, business dealings, and other matters of public interest.

A recently proposed alternative to this regime, however, could prove an even greater impediment for online reporting, although it might lower Brazil’s position in Google’s government request rankings.

Brazil is looking to introduce new regulation of the Internet. Draft language for a proposed new “Civil Rights Framework for the Internet in Brazil” would introduce an even more streamlined way for critics to restrain online reporting, one that would no longer involve even minimal prior judicial oversight.

In Section IV of the current draft, Web site hosts would become liable for their users’ content if they do not immediately remove it after receiving notice of a complaint by a third party. The bill’s suggested procedure for dealing with such complaints seems to be modeled on the “notice and take down” system in the controversial U.S. Digital Millennium Copyright Act, or DMCA. In this and the Brazilian proposal, intermediaries such as Google are protected from liability under copyright law, but only if they take down content after receiving a notice of complaint. The original content posters can request the content be restored, but only after filing a counter-notice.

In the United States, such preemptive removal of content is restricted to claims of copyright infringement; other legal threats toward hosts to delete content from the Internet on other grounds must pass through the courts (or else be voluntarily removed by the hosting company). Nonetheless, even limited to copyright complaints, the DMCA takedown procedure has been abused to silence critical speech and analysis.

The proposed Brazilian bill goes much further than the DMCA, allowing third parties to demand that content be taken down for any reason, including claims of defamation.

If the bill was to pass in its current form, Google and other providers would have every incentive to remove content after only a single complaint or risk becoming liable for the material themselves. It would no doubt lower the total number of Brazilian court requests to remove content because a court order would no longer be needed. Google’s charts would show Brazil’s figures dropping, even as the level of invisible threats to online journalism increased. As the president of Brazil’s National Newspaper Association, Judith Brito, notes, taking down content whenever someone feels they were attacked “is unconstitutional,” the Brazilian news outlet O Globo reported.

The draft of the bill is still available for public comment and criticism until May 23. Given its current language, Brazilian policymakers and Internet users should consider which is worse: remaining at the top of Google’s tables, or truly becoming one of the most efficient places to silence Internet reporting.