News from the Committee to Protect Journalists 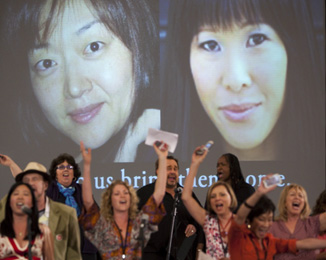 Journalists Euna Lee and Laura Ling were released from prison in North Korea on August 4 after former President Bill Clinton’s intervention. The two had been detained for five months but had received a sentence of 12 years hard labor for illegally entering North Korea and committing unspecified “hostile acts” while reporting near the border with China.

CPJ advocated on the Current TV journalists’ behalf internationally by keeping the case in the public eye. CPJ Asia Program Coordinator Bob Dietz took the lead, doing dozens of interviews about the case and releasing news alerts on the situation as it developed. While Current TV chose to stay quiet during their imprisonment, CPJ worked behind the scenes with the journalists’ families to coordinate the effort.
“My husband mentioned the names of so many individuals who helped us and supported us through this tough time,” Lee wrote in a statement posted on Facebook. “I won’t list the individual names here to thank because I believe you already know that I am talking to you when I say ‘Thank You’.”

In the past month, CPJ has joined with Index on Censorship and Canadian Journalists for Free Expression to craft a petition in support of Maziar Bahari. Bahari, Newsweek’s Tehran correspondent, has been held in an Iranian jail since June 21 without access to a lawyer. More than 100 prominent journalists from around the world signed the July 15 petition calling for Bahari’s release. CPJ started a second, online petition on Facebook that can be signed here.

CPJ has also advocated on behalf of dozens of other journalists who have been detained as part of Iran’s post-election crackdown, including Majeed Saeedi, a photographer from Getty Images. Saeedi was released on bail on August 12, however, CPJ continues to push for all charges against him to be dropped.

You can view a slideshow of Majeed’s work here, and read all of our Iran coverage here.

Shawn Crispin reports on impunity in the Philippines

CPJ Asia Program Consultant Shawn Crispin has authored an in-depth report titled “Under Oath, Under Threat,” which spotlights the failure of the Philippine government to protect witnesses to journalist murders and how this contributes to the pervasive culture of impunity in the country.

Crispin describes in an audio report how intimidation and fear have stopped witnesses from coming forward to help put the murderers behind bars, citing the recent murder of radio broadcaster Denis Cuesta as an example.

Walter Cronkite, the CBS News anchor and CPJ honorary co-chairman who died on July 17, was an instrumental leader in the international press freedom movement. Throughout CPJ’s 28-year history, Cronkite was active in efforts to protect local journalists working in dangerous situations around the world.

“Walter Cronkite knew firsthand the challenges journalists face bringing news to the public, and he never forgot them,” said CPJ Board Chairman Paul Steiger. “Whenever 8press freedom needed a champion, he was there. We will miss him.”

CPJ Executive Director Joel Simon describes Cronkite’s many contributions to press freedom, CPJ, and the news in an entry on the CPJ Blog.

Somali radio journalist Baabul Nor finally landed in Australia, where he was resettled after CPJ’s Journalist Assistance program helped evacuate him first to Kampala, Uganda, in late 2007. “I thank you so much for the great assistance that you have rendered me to get to Australia,” Babuul writes, saying that CPJ “lifted me from Somalia where I fled from death threats.” He calls CPJ’s work “really unforgettable help.”

CPJ is sad to announce that Elisabeth Witchel, CPJ’s Journalist Assistance coordinator, will be leaving CPJ after eight years. Elisabeth has done extraordinary work in her time at CPJ, including building the Journalist Assistance Program from the ground up and heading CPJ’s Global Campaign Against Impunity. She has affected the lives of hundreds of journalists from across the globe, including Iraqi journalist Jehad Ali, Haitian radio journalists Rony and Micheline Mathieu, and multiple Ethiopian journalists living in exile. Her remarkable depth of knowledge and ability to accomplish even the most complex assistance missions will be missed by CPJ and those whose lives she has touched. Elisabeth will be moving to England, from where she will continue to assist with the Journalist Assistance and Impunity Campaign through December.

Andrew Levinson served as CPJ’s media officer from 2007 to 2010, promoting the organization’s work on multiple platforms.